An interview with P.D. Halt 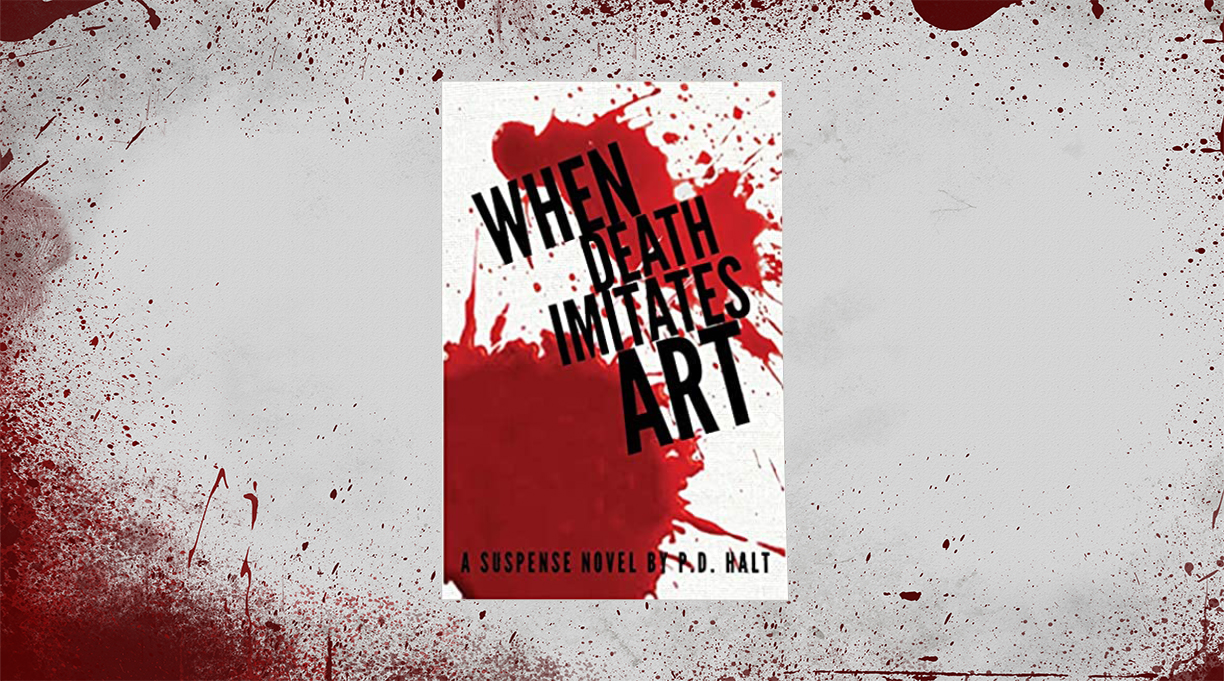 A grisly murder and an unsettling clue in the form of a painting that precisely mirrors the crime scene: That’s the premise of P.D. Halt’s engrossing mystery When Death Imitates Art.

Halt, who lives in New York City, is now a full-time novelist after an award-winning career in advertising—she thought up the preternaturally catchy hosiery pitch “Nothing beats a great pair of L’Eggs!”—and learned about avant-gardeart during a stint at an ad agency in Düsseldorf, Germany, in the early 1980s.

“All these wealthy people there…collected this very expensive art,” she recalls of the shows she went to in nearby Cologne, the epicenter of the German contemporary-art scene. Openings were over-the-top affairs. “There was this one artist who dressed in black robes and a medieval hat. He would go around chanting.”

That art scene became the setting for Halt’s debut mystery about an American expat named Amanda Lee who co-owns a Cologne gallery with Marlene Eichler, a German divorcée as glamorous as her namesake, Marlene Dietrich. While recovering from a mugging, Amanda sleeps over at Marlene’s house—and the next morning finds her dead body in the bathtub, riddled with stab wounds. Amanda’s terror mounts when, hours later, she discovers a painting hanging in her gallery that’s a perfect rendition of Marlene’s corpse as she found it.

The painting focuses the mystery of Marlene’s murder on art-world denizens whom Halt sketches in colorful, entertaining detail.

There’s Klaus Kruger, a fashionably morbid painter—his canvases include a hanged woman and a rabbit besieged by wolves—who proclaims that “Evil, not good, is the food of all great art!” at his opening at Amanda’s gallery. And there’s Kruger’s champion, Dieter Becker, a critic who had a past with Marlene and demands that Amanda only show artists he likes. “I based Dieter on a real person,” says Halt. “He wasn’t quite as dictatorial as my Dieter, but artists were very sycophantic to him because they needed him to get famous.”

And there’s Marlene’s ex-husband, Wolf, a dashing architect and collector with whom Amanda starts an affair. They are both fingered as suspects by the shrewd, methodical police kommissar Fredrich Grutzmacher and his assistant, Ernst Rudolf, a defector from East Germany’s Stasi secret police who seethes with ambition and knee-jerk judgments.

The beguiling, tragic Marlene centers the novel and its vivid portrait of modern Germany’s underbelly. Amanda’s sleuthing into Marlene’s past leads her to Chez Otto, a gambling den and cabaret with strippers and transvestite torch singers, where more killing goes down. But while Marlene’s murderer imitates a work of art, Halt drew her from a real-life model: a charismatic woman at the ad agency who befriended her and introduced her to the art scene.

“Her name was Elgin,” Halt recalls. “She was blonde and drop-dead gorgeous; men would turn on the street and look at her. She enjoyed the attention and was quite the flirt—shameless, sometimes. I went with her to an after-hours club that I based Chez Otto on. In the ladies’ room there were all these very nice women; later I learned they were hookers. The owner offered me a job, though I hope I don’t project that kind of thing!”

Halt’s fictional rendering of this luscious material has won When Death Imitates Art raves from critics. Kirkus Reviews praises the novel’s “edgy atmosphere” and “richly developed characters,” calling it a “chilling story [that’s] hard to put down,” and Death was chosen as a finalist for the 2019 Killer Nashville Silver Falchion Award. Halt’s prose conjures up a heady blend of desire and horror with subtle literary shadings, as in this haunting evocation of the killer’s fatal vision of Marlene:

Taking a deep breath, she removed the wrapping. Whoever painted this had emulated Edward Hopper perfectly—the melancholy, the spareness, and the tension of that style. Warm tones of flesh and blood stood out from the cold blue of sinister shadows stretching across the floor, claiming first a corner, then a wall. The composition’s eroticism was evident in the play of light across the breasts, abdomen, and slightly splayed legs.

Halt traces many of the elements of When Death Imitates Art back to her affection for Edgar Allen Poe, the father of the murder mystery genre, whom she first encountered in a grade-school English class. “I loved the scariness, and I loved the melancholy and the romance of his books,” she remembers. Thriller author Dean Koontz is another influence. “Koontz is very dark, and I learned my pacing from reading his books.”

Her detective narrative also benefitted from an unusual windfall, Halt says: the full documentation of a real murder investigation. “The wife of someone I worked with was an acquaintance of somebody in the Düsseldorf police department. I actually got a police murder report and used that for the procedural of how the police would handle Marlene’s murder.”

In her hands the result is a macabre mix of suspense, love story, and whodunit that keeps readers guessing but doesn’t blindside them with last-minute contrivances.

“I hate it when I read a book and at the end the murderer is somebody you never thought it could be,” Halt explains. She avoids that by growing the plot organically from character and motivation. “I had a different murderer in mind when I started When Death Imitates Art. But that character developed and told me, ‘I’ve done some pretty sleazy things in my life, but I would never kill anyone, let alone Marlene!’ Then I realized I had another character who would do that, and she became the murderer.”

Halt’s upcoming novel, The Devil’s Tea Table, tells the story of a lonely West Virginia woman who finds a new purpose in life by taking in her granddaughter after the girl’s parents die in a car crash only to have her own superstitious forebodings poison the relationship.

But Halt is planning to return to Amanda’s adventures in the German art world in a new mystery, this one inspired by the pre-Raphaelite artist Edward Burne-Jones’ painting The Depths of the Sea, which depicts a beautiful mermaid who lures sailors to shipwreck and drags them into the deep. Expect gripping action, sinister imagery, and another mesmerizing female. “Maybe I’m really weird,” Halt chuckles. “But when I saw that picture, I thought, ‘Wow!’ ”