An Interview with Stephanie Alexander 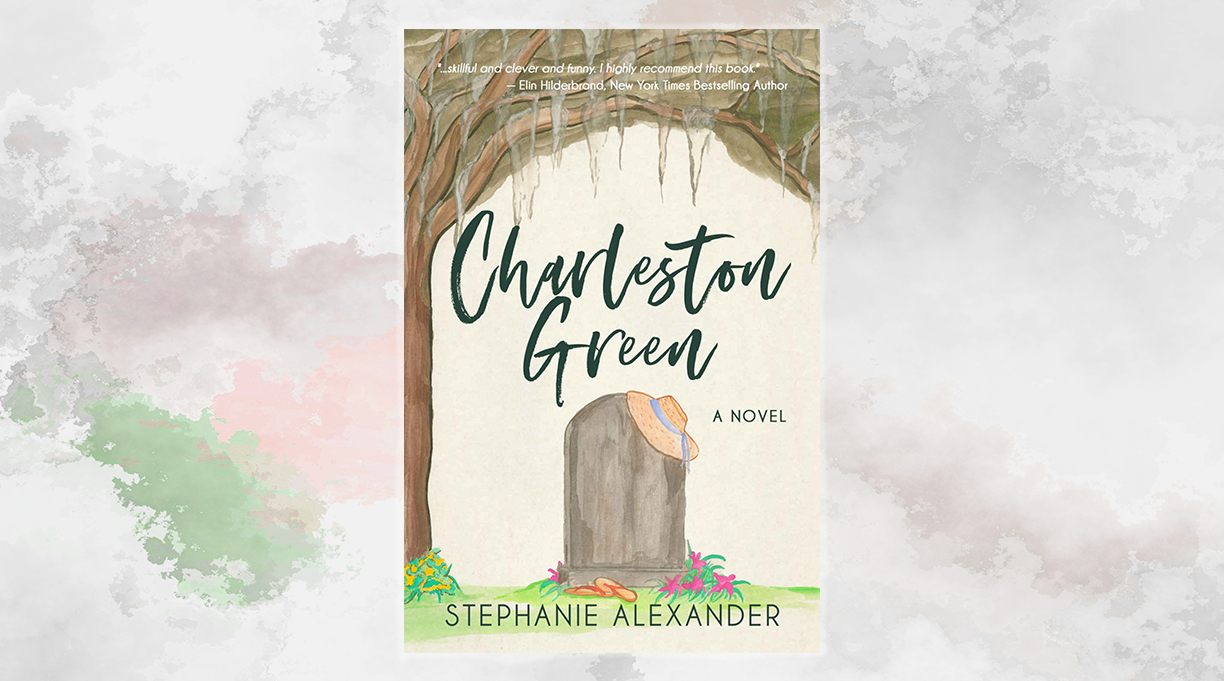 Tipsy, the protagonist of Stephanie Alexander’s latest novel, Charleston Green, was not named after Alexander’s dog. “The character named Tipsy came first,” she says. “I just loved this character so much,” and like the book’s Tipsy, a newly divorced artist whose supernatural abilities allow her to connect with ghosts, “the dog is very quirky too.”

However, the connections between Alexander’s life and her latest novel go beyond character and pet names. Like Tipsy, Alexander has also gone through a divorce, and as an attorney practicing family law, she understands both the legal and emotional aspects of the process. “When you have that kind of transition in your life, you’re not going to find all the answers immediately,” she says. For her, it meant major changes after years of staying home with her young children. “I hadn’t been supporting myself financially,” she said, but she had worked in public policy in the past and knew she had the skills to take care of herself.

Alexander initially taught as an adjunct professor at the College of Charleston and ran a ghostwriting business before settling into a full-time law career and beginning to publish her own books. She describes her first series of books as a collection of “feminist fairy-tale retellings,” a way to incorporate her longtime policy interests into her fiction. “That focus on women’s issues kind of flavors everything I write,” she says.

Charleston Green lacks the fairy-tale elements of Alexander’s earlier books, but it explores women’s roles and their status under the law. Questions of marriage and divorce drive much of the narrative, particularly South Carolina’s stringent rules: “The State of South Carolina wanted people to get married and stay married. Until recently, [it] recognized the antiquated legal concept of common-law marriage. South Carolina didn’t legalize divorce until 1949 and still did not recognize legal separation.”

Tipsy’s present-day split is complicated enough, but Jane and Henry Mott, the ghosts who occupy Tipsy’s house, were in an unhappy marriage and lived long before divorce was legalized in the state, and Jane accuses Henry of murdering her before taking his own life. “These people are literally trapped in a house with their spouse forever,” Alexander says, and their relationship has not improved in death. As they share their stories with Tipsy, she realizes she has to solve the mystery of the Motts’ killings in order to allow them to find peace—separately.

The presence of ghosts and Tipsy’s ability to communicate with them are key elements in Alexander’s writing. She prefers stories that include historical and supernatural elements and counts Philip Pullman’s His Dark Materials trilogy as “one of my all-time favorite series.” Alexander also enjoys Margaret Atwood and Stephen King, whose books she first discovered at the age of 10, starting with It. “I wouldn’t necessarily let my 11-year-old read that book,” she admits.

Alexander strives to build worlds in her fiction that are “relatable but with some element that is impossible,” like King’s incorporation of the supernatural. “When you add the speculative element, it makes it more interesting,” she says. Kirkus Reviews agrees, calling Charleston Green “a breezy paranormal read, and yet one with more depth than the reader might expect from the premise.”

Along with its speculative nature, Charleston Green is at its heart a Southern novel. “I wanted to have the story be a love letter to Charleston,” Alexander says, a celebration of the history, “the architecture, and the Spanish moss” of her adopted hometown. “There’s no place I would rather live,” she says. “People here live life to the fullest, which can be positive or negative.” Through Jane’s reminiscences, she allows Tipsy to see how the city has retained its character over time:

Henry hated the neighbors, and I had trouble befriending anyone with a well-known sourpuss for a husband. I tried going to church, to Saint Andrew’s Chapel, but I missed St. Philip’s. It didn’t have to be unpleasant. We had a beautiful home. We could walk on the beach or to the post office, or to Patjen’s Grocery Store. But all Henry saw were the muddy streets and the neighbors’ chickens and barefoot children.

In addition to Charleston itself, Alexander, who is fond of metaphors in her fiction, also looks to one of the city’s signature colors to explain its nature. The book’s title is taken from a popular color of paint that often looks black, but when “the sun hits it the right way, you can see it’s actually green,” Alexander says. The paint’s dual nature symbolizes one of the lessons she has learned in Charleston: “The more perfect people look, the more screwed up stuff is simmering below the surface.”

Alexander celebrates South Carolina’s role in her development as a writer. When she arrived at the College of Charleston in 1995 as a freshman from the Maryland suburbs, she developed a friendship with classmates from the rural town of Walterboro. “I credit a lot of my storytelling ability to those people” and the stories she heard when she joined her friends at their home. “Part of the culture of the South is the way people tell stories,” she says. “I just sit there and listen to them talk.”