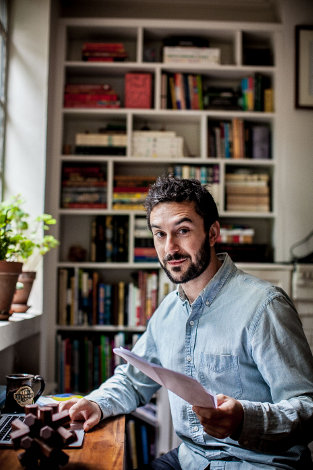 “I confess I’m impressed/with your zesty finesse,/but there is one last test/to assess nonetheless,” Rubin writes in one of many lines begging to be read aloud. (Try it.)

“It’s funny, because a lot of rhyming books seem hermetically sealed,” Rubin says via Skype from his home in Barcelona. “You can [only] read them in this very controlled meter.”

When the impetus to write a rhyming book arose, the inventive 35-year-old author of Dragons Love Tacos and Robo-Sauce, circled back to the hip-hop he heard growing up in New York.

“There’s a lot more air, there’s a lot more room for interpretation,” in those songs, he says, “and, that was really inspiring to me. I wanted to make something where somebody could find their own flow with the text and find the rhythm that feels right to them.”

If High Five is about one thing, it’s encouraging individuality. A yeti-like narrator named Sensei, who sports an amazing multicolor martial arts belt and a cane, entreats young readers to develop their own signature palm-planting style ahead of the High Five Championship of the World.* (*Not yet a real competition, though High Five’s U.S. publication is two days before the actual National High Five Day on April 18th.)

Accompanying the twisty bliss of Rubin’s rhymes are Salmieri’s exuberant illustrations. A fair share feature high-held hands, paws, and tentacles with bold neon caps that demand they be slapped: “HIGH FIVE!” Once readers arrive at the championship, Kirkus writes, “Salmieri’s scribbly ink-and–colored-pencil drawings of the all-animal cast, audience, and panel of judges reflect the infectiously rising suspense and wild excitement as the unseen ‘Kid’ the narrator addresses sends each foe in succession reeling away in stunned defeat.”

To wit, it is triumphant reading destined for a beating by many enthusiastic small hands.

“I’m really excited to see how kids make it their own,” Rubin says, “because there’s a lot to this book that happens off the page. I have no idea [of the limits of] how they’ll interact with it and show off their own creativity.”

“My nightmare for this book is that some very sweet grandma-type person is reading it to a child that’s perhaps a bit overenthusiastic,” Rubin says. “And for some misguided reason, she holds the book in front of her face, the kid winds up a little too hard, and just knocks grandma onto the floor.

“The dream scenario is that kids become inspired to organize air-guitar-style tournaments,” he says, “where they pair up and compete for style points, enthusiasm, and technical difficulty against their costumed peers. They have sort of a ranked regional system until they get to the national high-five championship that’s hosted by comedian Godfrey on the FX network.”

Megan Labrise is the editor at large and cohost of the Fully Booked podcast.