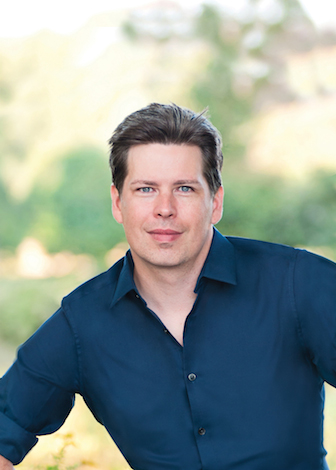 You could say Adam Shaughnessy knows a lot about kids. First, he taught second and third grade in Connecticut at a multicultural magnet school, and then started an afterschool and extracurricular recreational program focused on stories.

“Kids are figuring so many things out, socially and academically,” Shaughnessy says. “There’s so much going on at that age, and they’ll still talk about it. They know how to ask the right questions and if you show an interest, they’ll let you in on what confuses and excites them.”

One particular story used in the afterschool program Eye of Odin planted the seed for Shaughnessy’s debut novel, The Entirely True Story of the Unbelievable FIB, which combines smart kids, contemporary challenges, and Norse myth to create a quick-moving story that manages to explore big themes in an accessible, humorous way, with a deep respect for readers.

Drawing on his knowledge of kids, Shaughnessy created the spunky, wry character of 11-year-old Pru Potts. Pru’s determined to get to the bottom of some very unusual occurrences in her New England hometown. A new boy, ABE, shows up in class, ready to befriend Pru; mysterious letters are sent; and giant thunderclouds haven’t left the skies for days. What’s next, a talking squirrel? (Answer: yes).

Pru’s also working through the loss of her father; Shaughnessy smartly uses Pru’s confusion and questions to take the book to a deeper level, well-suited to book group and parent-child debate and discussion.

Shaughnessy wrote the first draft in April of 2009, after picking up a “novel in a month” kit. “It was really, really awful, but it was a lot of fun,” he says. “It was discovery and exploration and play all at once.” Afterward, he rewrote the beginning to the end four times, over the next few years, working on the pacing and connections between characters.

The experience of teaching, in turn, taught Shaughnessy about pacing. “In the enrichment programs, we would get immediate feedback if a concept was too easy or too abstract for them, or just interesting or boring.”

Shaughnessy’s book will definitely make adults think, too.  Is the world safe? What constitutes a lie? As Mister Fox, a provocative character who helps Pru explore Middleton’s strange occurrences and her father’s death, says: “The greatest lie of all, the worst lie of them all, and the one we tell most often to ourselves and to our children: that the world is safe, or that it can be made so.” It’s a strong statement, a truth-telling that will resound mightily for some children.

“Where I taught, students were dealing with hardships that would’ve blown me away at that age, kids who had already been confronted by the fact that the world is not a safe place,” Shaughnessy says.

“There’s the adult temptation to superimpose upon that experience that everything’s OK, and everything’s fine. But that’s not the case, and it’s not their experience. I really wanted to be respectful of the truth of everyone’s own experience and truth of the world, and to explore themes of safety.”

Mister Fox also offers a unique take on magic that will make even the most cynical adult rethink assumptions: “Only minds that are truly open to possibility can see magic.”

Shaughnessy, now pursuing his master’s in children’s literature, i

s happy to discuss the book’s surprising perspective. “One of the conventions we see commonly in stories for kids is that you have to believe in magic to experience it,” Shaughnessy says. “That’s how we’re supposed to bring Tinkerbell back to life.”

“It’s a beautiful idea. But I thought, ‘Wait, is there another side of that, is there something about believing something without questioning it that we should be wary of?’ ” Shaughnessy respects the reader’s inherent curiosity and ability to “investigate belief,” as manifested by Pru’s character.  The Entirely True Story isn’t afraid to challenge expectations.

This investigation of magic takes place in a variety of settings, including streets, homes, a graveyard, and of course, nature. “The woods seem to be the embodiment of uncertainty,” Shaughnessy says. Growing up in the suburbs, Shaughnessy loved losing himself in the local park. The Chronicles of Narnia was a favorite childhood series, where children experience “coats turning to pine needles.”

Shaughnessy has almost completed his master’s in children’s literature, but he’s also revising the sequel to FIB (he sold the initial novel as a two-book deal). The degree seems almost superfluous at this point; his education in and contribution to children’s literature is well underway.