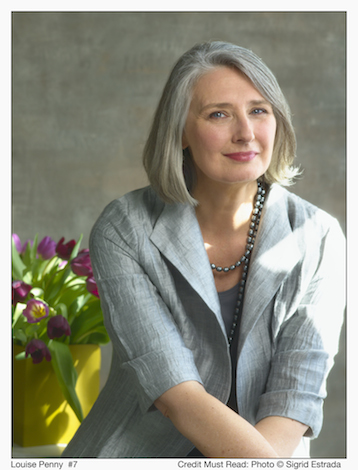 Since my end-of-summer vacation, I am officially addicted to Armand Gamache. Chief Inspector for homicide at the Sûreté du Québec, Gamache is the hero—and I don’t use that word lightly—of Louise Penny’s mystery series, which began in 2006 with Still Life and expands every year, most recently this August with The Long Way Home. Unlike many mysteries, Penny’s really need to be read in order, because in addition to the invariably complex and thought-provoking cases featured in each volume, there’s an ongoing subplot about Gamache’s conflict with his corrupt higher-ups in the Sûreté; the first two books just hint at some titanic clash in his past, and the third, The Cruelest Month, finally reveals the depths of the depravity Gamache is facing. The later books also work in cycles, with events of each story setting off repercussions in the next, and though I only brought one on vacation with me, I quickly downloaded three more onto my Nook (even though I had the paperbacks at home!), and if I wasn’t trying to save the last three for a time when I can really slow down and savor them, I’d be gobbling them up right this minute.

Most of the books are set in Three Pines, an idyllic small town that doesn’t appear on any maps but has a suspiciously high murder rate, though occasionally Penny will change things up by choosing another setting—a historic hotel, an English library in French-speaking Quebec, a hidden monastery. Like J.K. Rowling in the Harry Potter tales (and, at least so far, in her Robert Galbraith private-eye series), Penny has woven her books into a series that fits together tightly, playing theme and variation like a symphony spread across the volumes. The relationships among Gamache, his colleagues, and the townspeople of Three Pines deepen, and the reader’s affection for all of them grows more profound, with every new installment. I hope Penny will follow Gamache’s adventures through many more books, but I’m not looking forward to the time (soon, soon) when I’ll have finished the whole backlist and will have to wait a year between fixes.