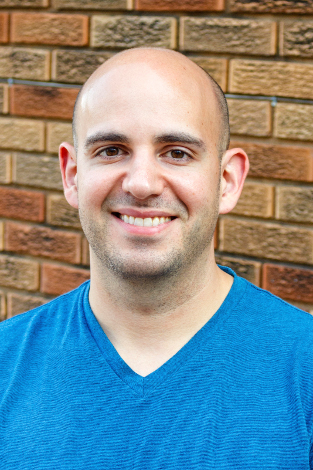 High school sophomore Darius Kellner has two enemies and one friend, respectively: Trent Bolger and Chip Cusomano, aka the Soulless Minions of Orthodoxy, and Javeneh Esfahani, a True Persian who claims to be physiologically incapable of burping.

“To be honest, I wasn’t sure that was really a thing—being physiologically incapable of burping,” Adib Khorram writes in Darius the Great Is Not Okay“ but Javeneh was the closest thing I had to a friend at Chapel Hill High School, so I didn’t want to risk alienating her by prying too deeply.”

No wonder he’s not okay! All the qualities that will endear Darius to legions of readers—tea enthusiast, doting older brother, diagnosed depressive, Fractional Persian (on his mom’s side), good soccer player, great sense of humor, Star Trek: The Next Generationsuperfan—are lost on the denizens of Portland, Oregon, where he was born and raised.

“Darius is a very tender soul who wears his heart on his sleeve,” says Khorram, a Fractional Persian (on his dad’s side) born and raised in Kansas City, Missouri. “He’s just a precious cinnamon roll who’s unapologetically himself, who doesn’t try to change to please others, who rejects a lot of toxic masculinity. I really like that about him.”

It’s not until Darius and his family travel to Yazd, Iran, to meet his extended family face to face that he encounters a peer who likes and accepts him in toto.

Sohrab, a soccer-loving Bahá’í boy from Darius’ grandparents’ neighborhood, becomes the first friend “who understood me without even trying,” Khorram writes. “Who knew what it was like to be stuck on the side because of one little thing that set you apart.”

“Maybe the most valuable thing about having a good friend,” he says, “is that they can see the parts of you that you’re too close to appreciate.”

Khorram’s depiction of the budding friendship is tender, compelling, nuanced, and inspiring. “Sohrab teaches Darius what friendship is really about...” Kirkus writes, and the latter “ learns to love himself, no matter what external forces attempt to squash his confidence.”

That’s one reason why it’s so surprising to hear Khorram struggled to get the friendship right.

“I think it was one of the hardest things to write,” he says, “because I’ve kept the same friends that I’ve had since I was eight”—and they still hang out all the time. “So it was very interesting and difficult to dig into a place of asking myself, How did it feel when I was first forming those friendships?”

Curious, happy, insecure, confused, exposed, conflicted, hurt, and hopeful is the answer apparent. One of the best parts of writing YA fiction, Khorram says, is that when it comes to feelings, you really can have it all (sometimes simultaneously).

“I love how raw and honest the emotions are when writing for teenagers,” says Khorram, who, like Darius, was diagnosed with major depressive disorder as a teen. “Sometimes I feel like I missed on some of that emotionality when I was a teenager, because I was constantly switching between medications, [which] can really play havoc with your emotional states....But there’s something exciting about the boundless possibilities that the world still presents when you’re a teenager.

“And you cannot bullshit [teen] readers,” he continues, “because teenagers are like the best bullshit detectors in the world. You just have to be honest with them, and you have to be honest in your writing, and there’s something really liberating about being able to lay all your cards on the table when you’re writing instead of holding back or trying to make allusions, instead of just saying what you need to say.”

Megan Labrise is a staff writer and cohost of the Fully Booked podcast.