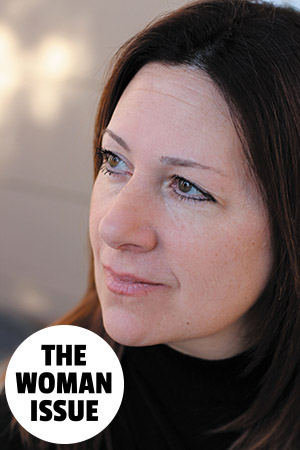 Photo courtesy of the author

Performance is power. Esme, the showgirl protagonist of Adrienne Sharp’s newest novel, The Magnificent Esme Wells, thrives by following this mantra. So does the city that makes her career, late-1940s Las Vegas, on the cusp of becoming an entertainment powerhouse. The landscape of early Vegas first inspired Sharp to write her novel. “I thought, ‘What a great landscape—big desert, this whole empire being built, the second Jewish empire out there,’ ” she says. She just had to create characters spirited and plucky enough to match her setting.

Sharp turned to her family’s stories. Like Esme’s father, Sharp’s own grandparents on her mother’s side were compulsive gamblers. In the early ’40s, they left their hometown of Baltimore for Los Angeles and a life at the racetracks. Eventually, they abandoned Sharp’s mother in an orphanage and, several years later, had a second son whose care they largely neglected. Sharp began developing a protagonist inspired by her uncle but soon realized that a male protagonist was wrong for her story. “So that’s when I started thinking, ‘Alright, we’re going to revamp this,’ ” Sharp says. “I found a good voice for her, and I gave her a lot of my mom’s characteristics, her incredible drive and spunk and will to go on.” Still, Sharp drew on the haphazard nature of her uncle’s life for the backstory to Esme’s Las Vegas adventure as a showgirl. Comprising almost half of the novel, Esme’s childhood story illuminates fascinating parallels between the worlds of gambling and show business in Los Angeles and Las Vegas, where Esme ultimately launches her career.

Part of the charm of The Magnificent Esme Wells comes from seeing Las Vegas through Esme’s insider eyes, as it was before the tower-building boom of the ’50s. To achieve this effect, Sharp had to pinpoint the historically appropriate size of the city’s casinos and hotels. Touring the Flamingo’s historical guest rooms and looking at photographs of the casinos from the ’40s, Sharp marveled at the “little rooms with two twin beds and lamps that were from 1948,” the casino floors that held just a few tables and one-armed bandits. “It was much more intimate in the way that America was more intimate—our houses were smaller, there was one car, the bedrooms were small—Vegas was the same way, on the same scale.” Similarly, Sharp’s careful research into the lives of infamous gangsters who built up the city, like Benjamin "Bugsy" Siegel, allowed her to write about them intimately. “I was trying to see Bugsy Siegel just as a man who showed kindness to Esme, made her feel important, showed attention to her,” she explains.

Strong and sharp, Esme’s voice has a finely calibrated distance from her surroundings. She is bracingly self-aware of her need to make it as a showgirl and what it might cost her personally; professionally, she’s equally aware of what her talent and beauty should cost others. “Esme recognizes that beauty and femininity are real commodities,” Sharp says. “She’s smart, and like her dad, always looking for an angle, and she realizes, ‘I’m not going to just get my salary, I want a cut of the drinks, I want a cut of the tables; I’m filling this place and they’re drinking because I’m here.’ ” Sharp enriches what Kirkus’ reviewer calls the novel’s “subtle feminist trajectory” with the immersive experience of the pains and pleasures of performance. “I knew what it felt like to stand on a stage and be costumed and made-up and to be this sort of beautiful, idealized version of femininity,” Sharp, who is a trained ballerina and has written extensively about ballet dancers, says. “I knew that sense of the audience out there, the adrenaline rush for the performer on the stage.” Alexia Nader is a writer living in San Francisco.