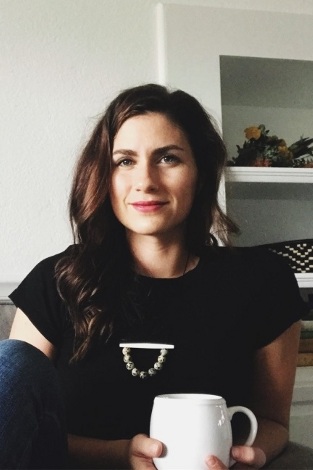 “I always get my best ideas when I’m driving,” Adrienne Young says. One day while driving, she got an image in her mind of a girl who was a warrior standing on a battlefield, for the first time seeing her brother after she thought he was dead. Young had no clue where the brother had actually been. “I was just really excited by that moment. So I pulled over on the side of the road and I scribbled a million notes on an old torn-up envelope in my car. I started writing the first chapter that night.”

Young didn’t set out to write a Viking-inspired fantasy — “at first, I really resisted that influence,” she says — but as she grew to know her characters and understand their world, she gave in. “It just really fit,” she explains.

The Riki and the Aska, clans serving two feuding gods, are locked in a generationslong war in Young’s debut novel, Sky in the Deep. In some ways, they know each other intimately, an intimacy born through battle. And yet as Eelyn, the sister-warrior whose appearance in Young’s thoughts first spawned this tale, discovers, they don’t really know each other at all.

Cushioned by distance and demonization, both the Riki and the Aska have managed to lose sight of their enemy’s humanity. Fueled by a hatred taught from infancy, they have chosen instead to see only their differences. When Eelyn, an Aska, gets to know the Riki, however, she’s forced to make a choice: Either she can ignore what she’s seeing and experiencing with these strangers, or she can ignore everything she’s been told by her own people.

Although filled with blood and battles, at its heart, Sky in the Deep is a story of love of family, faith, and deep-set tradition. “That family dynamic, it helps you understand the violence and the ruthlessness,” Young says. “They were fighting for their family.” And in that sense, it feels utterly authentic in its grounding to the ancient Nordic world. But that’s not to say that it won’t resonate deeply with a modern audience.

“I grew up in a very conservative household in Texas,” Young says. “For a long time, I struggled to come to terms with the fact that the way my family saw the world didn’t match up with the way I did. I had to learn to let go of things that I had been taught or told, expectations that didn’t fit into my own worldview. But it was hard because I still wanted to fit in with my family and my community. I think I wrote a lot of that into Eeyln’s experience. She has to choose to change even if that means being different from everything she’s ever known, from everyone she’s ever known.

“I hope this book causes readers to ask questions about the way they see things,” she adds. “And maybe it’s only a whisper of a question. But I think this story has some very current, real-world reflections. I hope it inspires people to think more about what they believe. I think Eelyn is a really great example of bravery. She’s able to change, to open her heart. I think we could all learn from that.”