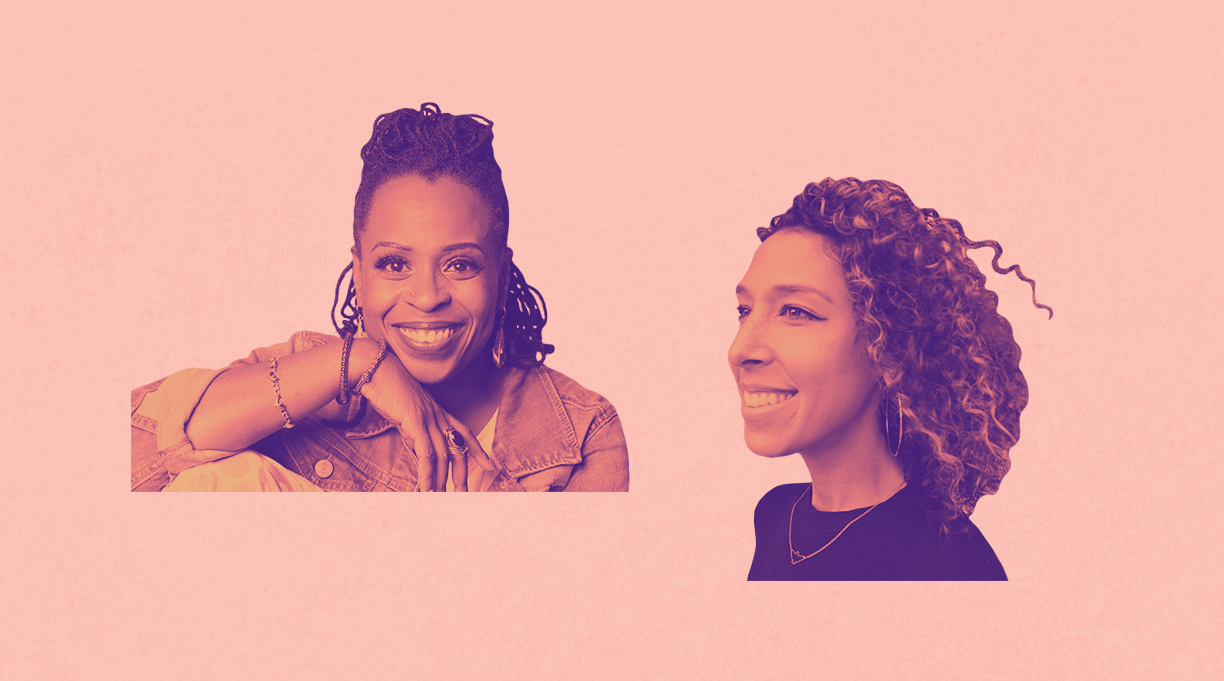 In Jump at the Sun (Caitlyn Dlouhy/Atheneum, Jan. 12), author, teacher, and Kirkus Prize finalist Alicia D. Williams teams with illustrator Jacqueline Alcántara to bring the life and spirit of Zora Neale Hurston to a picture-book audience. The text sings with Southern character, and the visuals incorporate images from the African American folktales that the legendary novelist (Their Eyes Were Watching God) and ethnographer collected. Playful speech bubbles allow these folktale characters to present bits of their stories alongside the narrative of Hurston’s life. The creators spoke with Kirkus via Zoom, Williams from her home in Charlotte, North Carolina, and Alcántara from hers in Detroit. It was the first time the two had met in real time. The conversation has been edited for length and clarity.

Did your publisher put a wall up between you?

Alicia D. Williams: It’s so interesting how publishers [keep the authors and illustrators separate]. They take our words, give them to the illustrator, and we just have to trust them. There were a few times that questions arose, and Jackie would send them to the editor, and the editor would bring them to me, just about historical accuracy; other than that, no [contact].

Jacqueline Alcántara: I figured with a nonfiction book that there would be a little bit more sharing of information [and] research, but it was not at all so. After the fact, I realized why they do that. I think the process of making the discoveries on your own and putting the pieces together is really such a big part of figuring out how you want to create a book: what story you want to tell, Alicia, [and] what story I want to tell.

JA: No, [there wasn’t] something [else] that I wanted to bring to it. But reading [Hurston’s] biography, reading her novels, [I found] visual things that I felt were such beautiful metaphors that could be included in the illustrations.

Can you give us an example?

JA: Oh, my gosh, there’s so many, she just has metaphors everywhere, right? Her whole life is just like the [book’s] title. The sun, and jumping at the sun—they just kept popping up. When she was a little kid [she was] obsessed with the horizon, thinking her house was at the center of the universe. So that made me think of the sun and Zora and the horizon—just to play with that in the compositions. That’s the biggest metaphor, but there are so many little ones that I could go on for an hour. She gives you so much to work with.

ADW: I didn’t have the pleasure of negotiating who I wanted to illustrate it. So when my editor presented the name, I quickly Googled her. And from her website, I knew that she was the perfect person. She captures movement, and Zora’s life was all about movement and transitions. I have to be honest, I stalked [Jackie] on Instagram. Jackie, you have to tell her that you did more than I did: You went down to Florida and looked at the Everglades to capture the precise look of what Zora would have seen.

JA: It’s a much more fun way to do research if you can go to a place and take it in with all of your senses. Zora had been brave enough to go on huge road trips by herself during this pretty dangerous time in history for a Black woman traveling by herself in the South. I can’t at all compare, but [traveling alone] puts you in a bit of a vulnerable state, and you’re just kind of more aware of things.

Alicia, how did you come to the story?

ADW: When I was in college, I had a friend [who] was giggling over a Zora Neale Hurston book. I didn’t see

what was funny about it. I grew up in the Midwest, and she was from the South, and that was the difference for me. My love grew later, because I started doing oral storytelling with Brer Fox and trickster tales. And then I read Their Eyes Were Watching God, and I fell in love completely. I think as I became a writer, that story was in my spirit. So one day I was just tinkering with a phrase, and that was the first sentence of this story. I had to really immerse myself in her world. But piecing together her life was just—I was like, why did I even do this? I had books galore sitting on my table, just books upon books, trying to figure out what is vital for little ones. [The manuscript] was probably 3,000 words long until we revised it.

How did you decide what to present?

ADW: I do biography projects [with my students], and I know that what’s important is, Why do I need to know this person? Those 3,000 words had to be whittled down to what was important, and that’s that she loved stories. Zora collected these stories for us to have. [People] pick up her work, her novels, but [not necessarily] the storytelling of the African American tradition. That was the one trait I needed kids to know.

JA: I love the way you weave the little bits of stories throughout. I was like, I have to know the rest of the story!

Jackie, I love the way that you use those speech balloons.

JA: Actually, that was written into the manuscript, and I loved it. As I was reading Of Mules and Men and [Hurston’s other] anthologies, in my sketchbook I just did whimsical little drawings, whatever came to mind. I used [what I drew] as the characters.

ADW: There were some things that you did that I didn’t anticipate, but it worked so well. [There’s] a reference to anthropology, and you have to explain what anthropology is, and it takes you out of the story for a moment. But you did this wonderful thing.

JA: That came from one of her folktales, [about] a snail. I just drew a sketch of this guy crouched over, talking to this little snail. Later when I was thinking about why Zora loved anthropology, it was because it gave her a reason to take a magnifying glass to people. And [I remembered that] sketch, and I thought, “Oh, this is perfect.” Her bending over with this magnifying glass and just kind of studying these little people singing and playing guitar and chatting.

Alicia, how long did it take you to get each beat just so?

ADW: To the last copy edit at midnight, we worked on it. The pictures were done. We were getting the speech bubbles correct. But then I read it aloud. And I’m like, Oh, that should go there, because I hear something different. I think the hardest part was the dialect—making sure the dialect was consistent and wasn’t overboard. And what should be in dialect, what should not be, should the ending be dropped, or should the beginning be dropped?

I just am in awe of Zora because of her courage. I wish I had that for myself. I wonder if I could have done that, to gather this beautiful treasure trove of stories and tales. She did that for us.