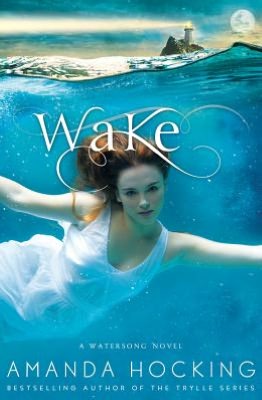 Harper and Gemma, sisters for better or worse, haven’t had the easiest few years. After a tragic automobile accident left their mother mentally impaired and in an assisted-living home, their domestic day to day has been all but easy.

In the physical absence of their mother and mental absence of their father, Harper has adopted an authoritarian role. And as adorable boy-next-door Alex begins to court Gemma, disapproving Harper has only tightened the reins. The only place Gemma can shed the shackles of Harper’s obsessive, watchful eye is the bay to which she escapes for ill-advised nightly swims (she’s a promising competitive swimmer).

It turns out that undercurrents and rogue sharks are the least of Harper’s nautical worries when three mysterious out-of-towner bombshell girls set their sights on recruiting Gemma for their clique. It’s a clique that has the deviant power to transform Gemma into a mythical siren, Alex into lunch and Harper into an only child. Self-publishing phenom Amanda Hocking, the author of Wake, is aboveboard about crossing over from e-publishing, her fear of sea monsters and the long-term effects of cartoons.

How has the crossover from e-publishing to traditional publishing been?

So far it's been really great. I still get to do all the fun stuff like writing and talking to readers—without all the stress of the publishing process.

Gemma and Harper are respectively the naive, defiant one and the practical, worrisome one. Are you a Gemma or a Harper?

I think I'm defiant like Gemma, but I have tons of anxiety like Harper. But if I had to pick one, I'm probably more like a lazier version of Harper.

Like Gemma's nighttime swims in the bay, what have you done in spite of someone else's better judgment?

I would never swim at night in the bay because I would honestly be terrified of being eaten by a shark or a sea monster. But I do have several tattoos, much to my mother's chagrin. She's OK with it now, but when I got my first few tattoos she was not pleased.

Where is your fascination with nautical lore rooted?

The first time I remember hearing about sirens was actually an episode of DuckTales when I was probably 6 or 7. I remember it very vividly, and it was that idea that stuck with me. I was really into Greek mythology when I was a kid, too, and I read just about everything I could on it. I do love the ocean, even though I'm rather frightened of it—or maybe that is why. I tend to write about things that scare me a lot—zombies, trolls, even vampires. These were all things that gave me nightmares as a child, especially trolls.

Gemma is a teen girl in the midst of a sexual awakening that is nipped in the bud when she transforms into a bloodthirsty siren. Is there a metaphoric lesson on abstinence here?

I try to not have lessons about sexuality in my books, but the transformation has definitely intensified Gemma's emotions. Fantasy and paranormal creatures give writers the ability to create a physical manifestation of an emotional urge, and I think the sirens definitely represent that in a way. But how much Gemma abstains from romance and how she learns to deal with her urges is really just her journey—one that some readers can relate to, but it's not meant to be a lesson in the right way or the wrong way.

You're a mythical siren luring strangers and sailors with your hypnotic voice. What's your siren song?

I would sing a tantalizing cover of "Tainted Love" by Soft Cell because it's an awesome song, and lyrically, it seems to fit the situation quite well.