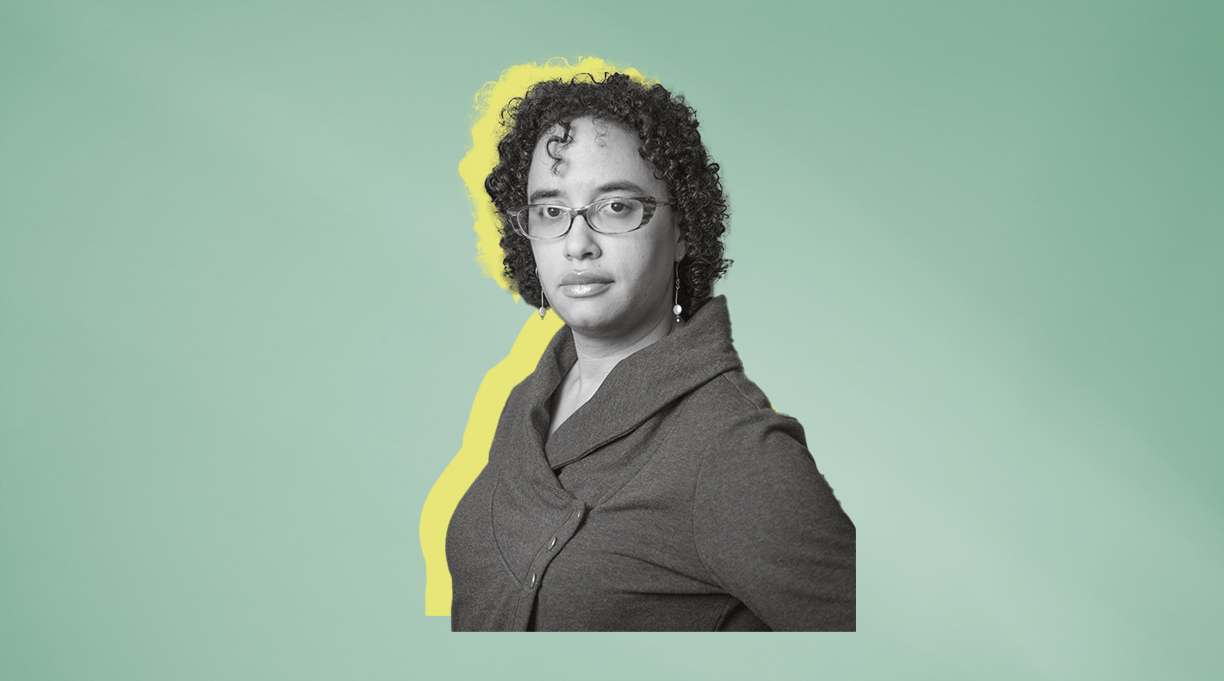 Photo of Shannon Gibney from the author

Shannon Gibney’s latest book, The Girl I Am, Was, and Never Will Be (Dutton, Jan. 10), is a work of speculative memoir exploring her experience as a transracial adoptee. In it, Gibney plumbs the complexities of personal and familial history across multiple timelines, using motifs from science fiction to paint a vivid image of her life as it is—and as it might have been. Our starred review called it “an innovative and captivating reflection on identity and self.” We spoke to Gibney over Zoom to learn more; our conversation has been edited for length and clarity.

Speculative memoir is not a genre we encounter every day.

This is the weirdest thing I’ve ever written, and I wasn’t sure that anyone would actually understand what I was doing and why it might be important. But I kept encountering writers who were also adoptees who had doppelgängers or multiple timelines running through their work. I began to see it as a theme in the adoptee experience but also for anyone who has experienced a discrete before and after marked by some sort of trauma. Perhaps you go on and you live your life in a certain timeline, but that trauma isn’t resolved. What happens to that irresolution?

You’ve written about African diasporic experience, which feels like something that has intersecting emotions with adoptee experience.

My second novel, Dream Country, was about five generations of a Liberian and Liberian American family. That was really scary. Being a transracial adoptee, most of the literature about transracial adoption has been written by White adoptive parents. That is a form of epistemological violence—I didn’t want to do that. That’s part of why it took me 20 years to write that book and to reconcile that, once you’re writing about this chasm in the African diaspora, the thing that you’re scared of is the thing that you’re writing about.

The epigraph for Dream Country is from Saidiya Hartman, and she says “For me, the rupture was the story.” My best friend said she started crying when she read that because, she said, “That’s your whole life, Shannon.” Dream Country has five parts and five different narrative voices, and it takes place on two continents and over 200 years. At the end of the book you find out that one of the main character’s sisters has been writing this whole thing. It’s metafictional. And it’s because there are all these holes in her family history and her personal history she’s working to fill.

How has being a mother impacted your writing and vice versa?

I love being a mother. It’s also exhausting: I’m essentially a single mom to an almost-13-year-old and an 8-year-old. I also had a stillbirth, I lost a baby at 41 1/2 weeks.

Before I had kids, I tended to be a little more precious about my writing time or the situation I needed in order to write. And then you have kids and it’s like OK, I’m on deadline, and this needs to get in, like, yesterday, so I’m just going to henpeck here while I’m holding my daughter and my son is running around the kitchen. It’s a situation that I don’t think many male writers have the experience to understand. But that is also the richness of so much of women’s writing: those multiple layers at work. I think especially as an adoptee, my kids have tethered me to the earth in a really powerful way, and they are the biggest champions for my writing.

When your family is formed by the state, you see how random these connections are. The only reason I’m my parents’ daughter is that I was born after them. The only reason my children are my children is that they were born after me. And it gets to this idea: What’s our responsibility to each other based on? If I wasn’t your mother, would we still laugh together at the same jokes?

It’s about life and death, but it’s also fleeting. I had forgotten, until I went through her letters again, that my birth mother had contemplated aborting me when she found out she was pregnant. There are all these small decisions that seem insignificant, but they each jut off and the timelines keep going. My friend [author Sun Yung Shin] talks about how the United States is haunted by ghosts, because we don’t reckon with our history. I guess another word for an alternate timeline is a haunting. My son was 3 1/2 when I had my stillbirth, and he will say, “I have two sisters, just one of them is dead,” and people will get upset, but he’s just communicating reality. Even though she’s gone, she’s there.

You use a lot of archival material in this book—how much of that had you already seen, and how much did you discover in the process of creating this work?

I asked my mother for all the letters she’d received from my birth mother, Patricia. My mom and my birth mom had this long relationship through letters, because my relationship with Patricia was so complicated and so difficult and we didn’t talk for many years. I had seen many of them before but never all in one place like that. If we’re talking about archival experiences, the letters from Patricia constitute the biggest portion of what’s in the book. And certainly, it did bring up a lot of stuff that I hadn’t felt in a while, a lot of unpleasant emotions: I can’t believe she said that, I can’t believe she did that.

That was something I was scared about in this manuscript: the portrayal of Patricia as a birth mom. I feel very strongly that artists’ and writers’ first duty is to the truth, to our truth, which is messy and multifaceted. You know when you’re skirting the truth in your work. The dominant, mainstream portrayals of mothers who have given up their children are really pathologizing and negative, and I didn’t want to contribute to that, but I also knew I needed to tell the truth from my point of view.

It’s a moment in this country when the prevailing narratives of adoption feel more important than ever, what with the overturn of Roe v. Wade.

There’s a lot of adoptee scholars and critical adoption studies folks that are taking that on. Kimberly McKee, who’s a Korean adoptee, coined the term Adoption Industrial Complex. We know how it works. It’s capitalism. It’s this machine that turns to the next disaster to get another supply of available infants. So yeah, the end of Roe might be, unfortunately, the next disaster for that complex.

Who is your ideal audience for this book?

My first audience for this book would be a younger me, who really felt like a freak. Transracial adoption is usually such an isolating experience. You might know other adoptees, but you don’t have the language to talk about it. But this book isn’t just for adoptees, this book is for anyone who’s on the journey of building a semicoherent self through storytelling.

Ilana Bensussen Epstein is a writer and filmmaker in Boston.