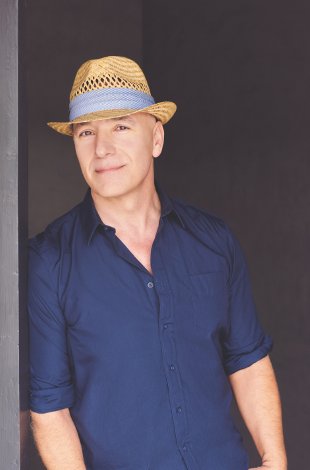 And yet, it wasn’t easy to claim “artist” as part of his identity.

“My experience is really one of so many other immigrants’ experiences,” says Surmelis, whose family moved from Greece to Illinois when he was 5 years old. “We were blue collar, we worked with our hands, we worked in kitchens—my dad started out as a dishwasher, my mom was a waitress—so that didn’t seem like something I could wear comfortably. Being an artist was a luxury and, also, a little too full of yourself.”

In The Dangerous Art of Blending In, artistic inclinations are just one thing 17-year-old Evan Panos must hide from his strict Greek parents in Kalakee, Illinois. Another is the first kiss he recently shared with a boy named Gaige at church camp. His emotionally and physically abusive mother doesn’t need the ammunition to issue a fresh round of cuts and bruises, injuries he must hide from his friends and peers.

His modest dream is to move beyond her reach.

“It consists of me living on my own, preferably in a big city,” Surmelis writes. “The bigger the better. My days are stress free. Normal. I have better hair. The kind of hair that I don’t have to pay attention to. You know the guys that just wake up and go? I’d be one of those guys. Like Henry Kimball. We can play tennis for hours and I wind up looking like the offspring of the Bride of Frankenstein and Albert Einstein. Henry looks like—well, he looks like Henry.”

After a summer apart, Henry, Evan’s best friend, looks suspiciously handsome. But more importantly, he’ll prove to be Evan’s greatest champion on his journey of self-discovery and acceptance.

“It’s so important and powerful to be able to say, to yourself and to people that care about you, This is who I am—in all ways,” Surmelis says. “That’s something that is still a struggle to some degree, but I feel more comfortable talking about who I am than ever before, and I think writing this book was a big part of that.”

While The Dangerous Art of Blending In isn’t autobiographical, it is greatly informed by the fear, shame, and abuse Surmelis experienced growing up in a strict Greek household in the Midwest, laid plain in the book’s affecting author’s note. The prompting of a best friend (who happens to be New York Times–bestselling YA author Jennifer Niven) empowered him to transform those experiences into fiction.

“We were on a hike one day and I said, ‘Girl, I don’t know how the hell you wrote this book,’ ” Surmelis says of All the Bright Places, based on Niven’s experience as a survivor of suicide. “I can’t write a journal entry, let alone a book about [my childhood trauma]. And she said, ‘Give the story to a character. Write it in another voice.’ ”

He went home and started writing The Dangerous Art of Blending In that night. And Evan’s story—told in a wry, knowing, and distinctive voice—soon transcended tragedy.

“I didn’t want to turn it into just a melodrama,” Surmelis says. “Being a teenager is sloppy and it’s funny and it’s stupid and it’s weird and it’s awkward and it’s sexy—it’s everything. I wanted to feel that in the writing, and I wanted the reader to walk away with that feeling, because that’s the experience.”