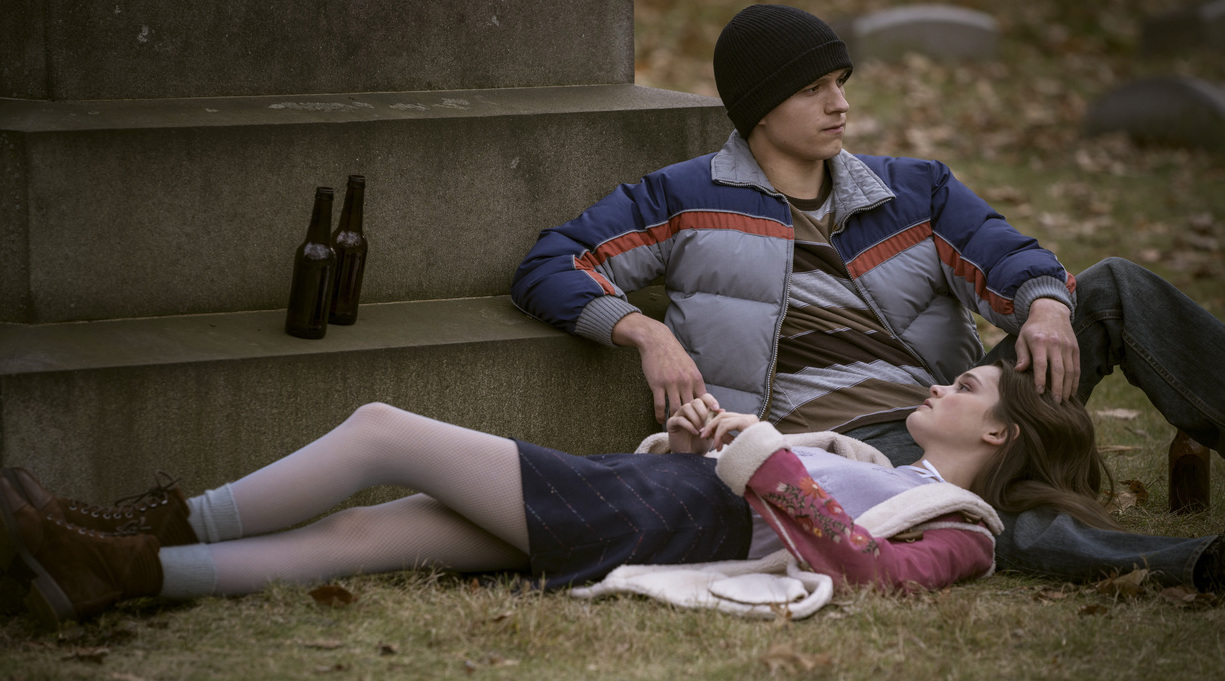 The narrator of Nico Walker’s Kirkus-starred 2018 novel, Cherry, is a young man from Cleveland who drops out of college and joins the U.S. Army to serve as a medic in the Iraq War. After his discharge, he returns home and suffers from PTSD; he starts seriously abusing drugs, including heroin, and becomes a bank robber in order to feed his addiction.

In real life, Walker did every single one of those things and served time in jail, where he wrote the book—which, to be clear, is a novel. In a 2019 interview with Killian Fox of the Guardian, Walker said, “I definitely didn’t want to write a non-fiction memoir….Legally, I didn’t think that I could. Beyond that, it was nice to have some ambiguity to hide behind.” Indeed, Walker keeps the narrator nameless to allow readers to imagine whoever they want in the role. That includes Spider-Man: Far from Home’s Tom Holland, who stars in a new film adaptation set to be released in theaters on Feb. 26 and on Apple TV+ on March 12.

The novel’s early sections require some patience, as they paint a picture of a frustratingly aimless guy who’s prone to bad decisions and sees women primarily as sex objects. Here’s an early description of his future wife, for instance: “Emily used to wear a white ribbon around her throat and talk in breaths and murmurs, being nice, as she was, in a way so as you didn’t know if she was a slut or just real down-to-earth.” At the same time, the author works hard to show his protagonist as perceptive and emotional—someone who’s capable of seeing the true beauty of things, but, you know, in a gritty way: “There’s a fuckload of starlings gone to war over a big wet juicy bag of garbage—look at them go!...This is the beauty of things fucking my heart.”

The account of the narrator’s time in the military is more interesting, as it viscerally gets across the repetitive, soul-deadening grind of going on mission after hellish mission; along the way, it also reveals the military as a toxic institution, plagued by casual homophobia and misogyny. (While in Iraq, the narrator refers to a female soldier as “definitely fuckable” and also “one of God’s diamonds,” because, as established, that’s how he rolls.) When the narrator gets home, it’s no surprise that he goes downhill and takes his wife with him; the latter parts of the book effectively stress the repetitiveness of addiction and the banality of crime, but it all leads nowhere in particular; in the end, the story just sputters to a stop.

Directors Anthony Russo and Joe Russo, best known for helming Avengers: Endgame and other Marvel blockbusters, wisely cast Holland as the lead in the film; after all, anyone who’s seen the actor as the naïve Peter Parker will automatically be on his side. The directors also seem to understand that the story, as laid out in the novel, is somewhat vague and formless; at one point, the film even introduces a doctor character named “Dr. Whomever.” Bank names get similar, clever treatment: “Shitty Bank,” “Capitalist One,” “Bank Fucks America,” “Credit None.” It’s a device that intriguingly emphasizes the subjectivity of the narrator’s memories, but the Russos seem content to simply use it as an occasional gag.

Holland does a convincing job as the still-nameless protagonist, showing more of the range that he demonstrated in the Netflix film The Devil All the Time, which Kirkus named as one of the best book-to-screen adaptations of 2020. Ciara Bravo, best known for her work as a child actor in the Nickelodeon show Big Time Rush, is less believable as drug-addict Emily, but to be fair, she doesn’t have much to work with. In both the book and movie, she’s a nonentity—a plot device to make the narrator seem more sympathetic. Sure, the protagonist may be a self-involved person who thinks nothing of making bank employees fear for their lives so he can get another fix, but just look at the pretty things he thinks about what’s-her-name.

She’s not the only underwritten female character in the novel or the film; the narrator’s ex-girlfriend, Madison, for instance, comes off as an unfeeling monster who has lots of tawdry sex with other men. In the movie, she’s played by Now Apocalypse’s Kelli Berglund in a blink-and-you-miss it role that absolutely wastes her considerable talent.

Still, the directors, along with screenwriters Angela Russo-Otstot and Jessica Goldberg, try their best to tweak the tale to make it more dramatic, especially in the latter sections. Someone actually dies in the aftermath of one robbery, for example, which doesn’t happen in the book. In addition, the narrator gets arrested and does significant time, which has the effect of giving the story a feeling of resolution. Viewers will feel that maybe, just maybe, the narrator can start over. Maybe he’ll write a novel about all this.