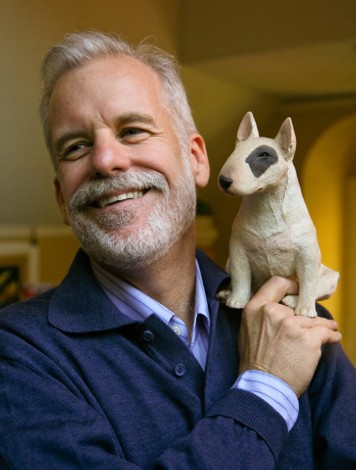 A is for apple, no? Or for alligator? No, in the strange land occupied by artist, illustrator, and author Chris Van Allsburg’s imagination, A links to the alpinist-dreaded term “avalanche,” which, in his lovely picture book The Z Was Zapped (1987), takes out the first letter of the alphabet in a grim fall of snow and rock.

Such things are always waiting to surprise us in Van Allsburg’s books. In The Polar Express (1985), an ancient train turns up in a frosty landscape where it should not be, beckoning a boy away from childhood toward a different realm—but not the creepy future of Snowpiercer, one hopes. In the Caldecott Medal–winning Jumanji (1981), another boy faces the awful possibility—one that is the stock in trade of children’s literature—that he will have to go through the world as an orphan, though he can control that destiny by making the right moves in a game whose every move is fraught with awful possibilities, including being trampled by dinosaurs in a once-orderly world reverted to swamp and cliff. Zathura (2002) picks up that story while in Ben’s Dream (1982)—and Van Allsburg is the poet laureate of dreaming—a boy and girl share a dream that finds them afloat over the world, not quite flying as freely as a bird, not quite able to direct the course of their journey, which is very much like life.

Stephen King made a memorable close to his recent novella Elevation with an appropriately grown-up version of that dream, but in Van Allsburg’s realms there are few or no adults: It’s a world, like those of his other books, in which children rule, with all the consequences attendant. One suspects that while the stories are ostensibly done for those children, they’re really meant to draw grown-ups, burdened and laden and otherwise taxed, back into the enchanted land where pterodactyls and secret gardens and ghost trains are the stuff of everyday life, a very good thing and a noble service to perform.

Van Allsburg, who just turned 70, a very grown-up age, has been hard at work forging his wondrous tales, illustrated with a sophistication more reminiscent of Barry Moser and Andrew Wyeth than the usual run of children’s books, for decades now. His stories are one thing; his drawings, masterpieces of mood and chiaroscuro atmosphere, are quite another, sometimes menacing, sometimes monumental, always rich in implication.

Van Allsburg’s career has been as accidental as the twists of Jumanji: He began as a sculptor who used a sketch pad to map out his projects in drawings worthy of Leonardo da Vinci himself. Those drawings took on lives of their own, and here we are. In a fitting turn of fate that, as it should in Van Allsburg’s worlds, turns the clock upside down, his first book, The Garden of Abdul Gasazi, published 40 years ago, is finally being made into a film, joining the twice-made Jumanji and other cinematic hits crafted from his ouevre. We wish Chris Van Allsburg a happy 70th—and, for ourselves, the hope that the new decade brings many more books.