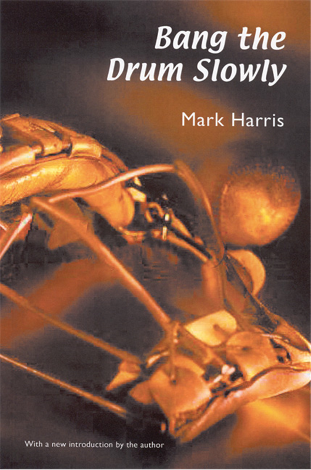 Henry W. Wiggen, “Author” to his teammates, is no meathead on the mound. He’s reasonably thoughtful, more R.A. Dickey than Goose Gossage, and he’s a mentor of sorts to the younger players on the New York Mammoths. (Think Giants there, just before they decamped to the opposite coast.) He doesn’t live for the moment, unlike most of those younger athletes. With a kid on the way, he has been planning for a day when he won’t be hurling fastballs “with his arm and his brain and his memory and his bluff for the sake of his pocket and his family,” selling insurance policies in the locker room, building a different if decidedly less exciting future for himself.

Bruce Pearson, on the other hand, lives for the here and now. Not well, mind you. The Mammoths’ third-stringer catcher is in danger of being sent back to the minors at any moment, and now, as Mark Harris’ Bang the Drum Slowly opens, he’s on the phone, begging the man he calls “Arthur”—not having understood what an author is—for help to keep that from happening.

The call isn’t coming from jail, Henry’s first thought, but instead from the Mayo Clinic, where Pearson has received bad news. Henry isn’t thrilled to have to travel to Minnesota to see the kid, for whom he doesn’t have much respect—“he cannot guess a pitcher, cannot remember what that same pitcher threw him the last time,” he grumbles. Still, being a team player, and having sold Pearson a life insurance policy that, he says, covers everything except sunstroke in the Arctic, he goes. Soon he is caught up in a plot mostly of his own devising: the kid won’t be around for long, and Henry means to shape him into the best player he can be before he goes to the big diamond in the sky.

Bang the Drum Slowly turns on the idea of base instincts turning into better angels, and, like its predecessor The Southpaw, it has been canonized as a classic of baseball writing. Harris, born Mark Harris Finkelstein in 1922, had played as a teenager, dreaming, like other young men of his time, of taking the field alongside the likes of DiMaggio, Maglie, and Mays. He became a writer about baseball instead, and Bang the Drum Slowly, its title borrowed from the cowboy ballad of old, quickly entered the lexicons of sports and literature alike. It yielded two excellent film versions as well, the first, aired soon after the book was published in 1956, starring a very young and not well known Paul Newman, who became a star thanks to his portrayal of Wiggen alongside another untested actor, Albert Salmi, as Pearson. The film was remade in the early ’70s, now with another emerging actor, Robert De Niro, in the role of the ill-fated catcher, whom Wiggen remembers as “not a bad fellow, no worse than most and probably better than some.”

Though most viewers remember John Hancock’s 1973 production as a tear-jerker, it well captures the sometimes-cynical humor of Harris’ original. And though baseball has become ever more corporate and soulless, it still inspires, just as Harris’ great novel does.