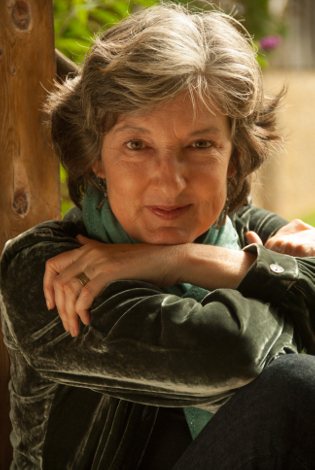 “I think it’s both comforting and profoundly disconcerting to know that many times in history people have looked at the world confronting them and said, ‘We can’t go forward,’ ” Barbara Kingsolver says. She is explaining why her new novel, Unsheltered, depicts two families living in Vineland, New Jersey, during two periods of crisis in America. In the present-day story, middle-aged professionals Willa and Iano are reeling from the loss of their jobs and pensions after her magazine and his college go bankrupt. Inhabiting the same falling-down house in the 1870s is Thatcher, a high school science teacher struggling to gain acceptance for Charles Darwin’s evolutionary theory.

“I chose the 1870s as my alternate world because I knew it was a really difficult, polarized moment in our history,” Kingsolver continues. “Racial divisions, urban/rural divisions, North/South divisions—those rifts were ripped open by the Civil War and really haven’t healed. I thought, how disorienting it must have been to have Darwin’s ideas come across the pond and say, ‘OK, now that you’re on the edge of your seat about whether or not this nation can go forward, how about the idea that you’re not even master of the universe anymore, that you came from this world rather than being put here to rule over it?’ ”

Willa, who is doing research on Vineland in hopes of finding that her dilapidated house has some historic importance that would enable her to get funding to repair it, can’t understand why Thatcher’s peers so fiercely resisted Darwin’s meticulously documented work. In a wincingly ironic moment, she thinks, “The old paradigm was an obsolete shell; the writing on the wall was huge. They just wouldn’t read.” It’s a shock when her daughter Tig calmly informs Willa that her assumptions about how the world works are just as outdated as the Victorians’. Expectations of individual financial security and an ever-rising standard of living are delusions, Tig declares, on “a used-up planet.”

“I wrote with Willa as my protagonist because I wanted to have sympathy for someone not seeing the writing on the wall,” says Kingsolver. “All of us over 30 have formed a set of assumptions about what’s true that become as immutable as physical laws. It feels like gravity to us that there will always be more fish in the sea, that growth is good, that every generation will have more than the one before. We hold these truths to be self-evident! That’s what I wanted to write about: how hard it is to see around our paradigm, and how tomorrow’s problems can’t be solved by yesterday’s people. If Tig had been the protagonist, everybody would be mad and defensive; she’s the gadfly, and she’s very irritating! This is a novel of resisters and gadflies, and that always makes a good story.”

Among the resisters is Tig’s grandfather Nick, gently portrayed despite his diatribes about communists and immigrants. “I live in a rural area, and I have plenty of friends who are on his end of the political spectrum,” Kingsolver comments. “They feel they’ve been passed by and what was supposed to be theirs is being taken by other people who should have been behind them in line. I have more sympathy for that position than most people who were utterly shocked on election day. Something I wanted to accomplish in this novel is to get those people to feel empathy for Nick, enough to have a conversation with someone like him that doesn’t begin with, ‘You idiot.’ One of the most important things a novel can do is create empathy, because it puts you inside the mind and body of another human being. There’s no other art form that does that exactly, and this is a powerful tool.”

Wendy Smith is a contributing editor at the American Scholar and Publishers Weekly; she reviews books for the Washington Post and the Boston Globe.