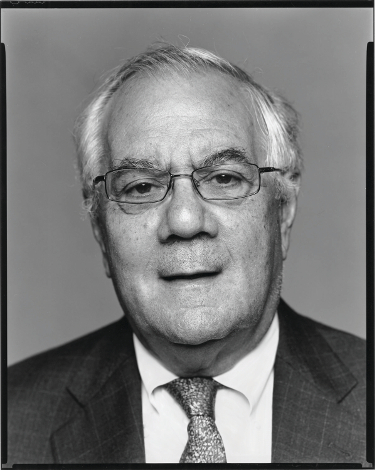 Barney Frank is well known for being well spoken—even when he’s yelling.

“That’s one of the lucky things about me: I talk good. I don’t have to do a lot of preparation,” says Frank, who represented Massachusetts’s 4th Congressional District from 1981-2013.

Writing, however, is fraught with technical difficulties. “It is possible to type illegibly, it turns out,” says Frank, who employed a Dictaphone and transcriptionists to write official Congressional correspondence.

At 400 pages, his new memoir proved too unwieldy to dictate. He had to two-finger type it on an oversized plastic keyboard with the ALT key removed. (He kept hitting it accidentally and turning the computer off.)

“I’m clumsy, and if things don’t work easily I tend to force them, and I break a lot of things. I’ve had three different relationships with men...and they’re all very different people, but I can hear all of them in my head saying, ‘Barney—don’t touch it,’ ” he says.

Frank: A Life in Politics from the Great Society to Same-Sex Marriage proves that content was never a problem. From Beacon Hill to Capitol Hill, Frank spent 45 years advancing liberal ideals. He championed LGBT equality and affordable housing and lent considerable effort (and his name) to the Dodd-Frank Wall Street Reform and Consumer Protection Act.

Frank stayed closeted through a Harvard education, a job in the Boston Mayor’s Office, tenure as a Massachusetts State legislator, and his first six years in Congress.

“There was this myth that I first tried to comfort myself with, but it soon became clear to me that it has no validity: that a very satisfying, rich public career with a lot of praise, with the chance to do good things, somehow makes up for an impoverished private life. The best career in the world is no substitute for the emotional and physical needs that human beings have,” says Frank, who came out in 1987. (Now happily married, Frank and his husband, Jim Ready, split their time between Maine and Massachusetts.)

In Frank, regrets—ranging from not endorsing Michael Dukakis for governor to a scandal involving a male prostitute, for which he was formally reprimanded—are shared as candidly as successes. He chronicles “two seismic shifts in American life: the sharp drop in prejudice against LGBT people and the equally sharp increase in antigovernment opinion,” with equal attention.

“How did this happen and what can be done to further the victories and reverse the defeats?” he asks—and answers, in part, by advocating “less dramatic political activity” over demonstrations, and compromise over all-or-nothing advancement.

“I formulated a rule: If you care deeply about an issue, and are engaged in group activity on its behalf that is fun and inspiring and heightens your sense of solidarity with others, you are almost certainly not doing your cause any good,” he writes. And, “As I would argue again and again throughout my career, there is a price to pay for rejecting the partial victories that are typically achieved through political activity.”

Frank wrote these lines with a diverse readership in mind.

“For someone who cares about public policy, who is skeptical of what we can accomplish through government, I hope to make the case to people that government is capable of more than you think,” he says. “Secondary audience—in terms of numbers, not terms of importance—would be LGBT people, who I hope will benefit some from seeing how things work. And then there is a third set, and that is people who agree with the ideology, people from the left, who I think need to be more disciplined in how they accomplish change.

As usual, the admonition has an admirable aim: to encourage Americans to reengage with the democratic process. One gets the sense from reading Frank that a reputation for loudly repudiating fellow politicians, journalists and, famously, a woman who compared Obama to Hitler, is no product of negativity. It’s just that Frank doesn’t suffer fools gladly, period.

In fact, he considers himself a positive person.

“I wouldn’t have done what I did for 45 years if I wasn’t,” he says. “I was basically working in government to try and make things better and a difference, and if you don’t have a conviction that things can get better, then you’d be stupid to be doing all that.”