‘Bear in Love’ is a Breath of Fresh Air 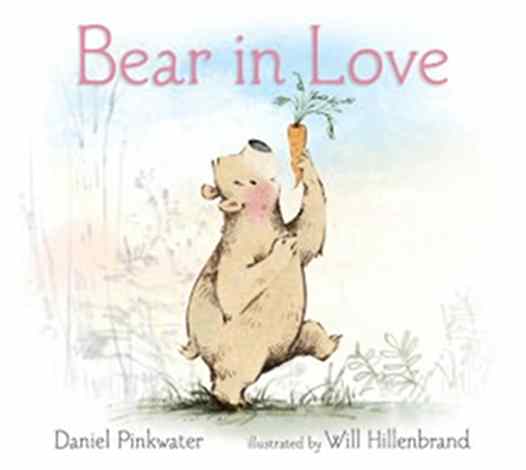 “Extra special.” It’s a phrase that is used to great effect toward the conclusion of Daniel Pinkwater’s new picture book, Bear in Love, illustrated by Will Hillenbrand and out this August from Candlewick.

And extra special could describe the book itself.

“A bear lived in the woods. He had a little cave, just big enough for him,” the story opens. Every morning, he stretches himself awake and then looks for something to eat. But on one particular morning, he wakes to a surprise: On a flat rock near his cave is a carrot, left as a gift from a mysterious benefactor.

More gifts arrive. Bear is thrilled, as well as a bit mystified. He reciprocates by leaving his own “extra special” gifts, and eventually he meets his new friend, a bunny who is smitten with the bear. “And the two of them sat side by side in the clearing, singing songs as the sun went down.”

And that’s that, plot wise.

What makes this book stand out is the great writing and Hillenbrand’s warm and cozy artwork.

No, really. “Cozy” gets overused in describing picture books, but trust me, you will want to grab a pillow and move into the story for a while. Or snuggle in is more like it.

First, though, the writing: Many things here work, such as the lovely, leisurely pacing, the playful tone and the solid characterization of the tenderhearted bear.

But best of all, Pinkwater seems to have chosen to string his words together in the most child-appealing ways. It’s almost like listening to a child speak, yet it’s never cloying or condescending, which it could so easily be.

When he’s left a giant pile of carrots on yet another morning, he exclaims, “What? What? What, what, what? A whole bunch of them?” When he finally meets the bunny, he says, “You are some cute little bear,” and the rabbit responds with “And you are quite the big strong bunny.” (“You might think there would be some confusion at this point, but apparently not,” Pinkwater adds parenthetically.)

It’s this type of straightforward, wide-eyed dialogue that pulls in children. The story is also very much a celebration of the senses and the physical world, as the bear crunches on carrots, scoops out “chunks of honeycomb with his claws,” smells the flower left for him, sinks his teeth into a giant cookie, sings and hums with abandon, listens to the beautiful song of the bunny just prior to meeting and even more.

As for the mixed-media illustrations, I’ve enjoyed many of Hillenbrand’s illustrated books for very young children over the years, but he’s better than ever here. Something, in fact, seems to have shifted, though I’m not precisely sure what. Perhaps it’s a palette more muted than what I’ve previously seen from him. Perhaps it’s the sketchy, soft-focus backgrounds, which make the rosy-cheeked bear and his gifts all the more radiant.

It’s like a breath of fresh air, this sweet, unassuming tale.