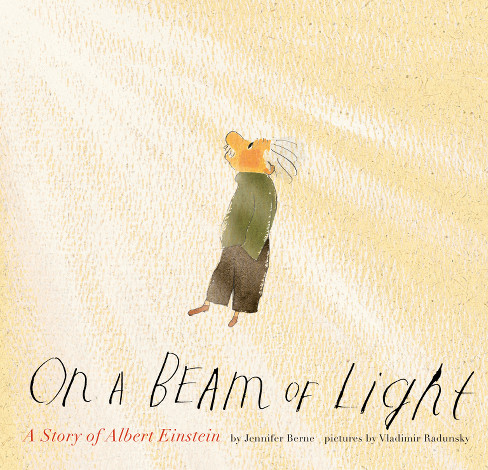 The path to success—and heaps of professional accolades—is rarely a clear one, with obstacles and naysayers clogging the cogs of personal evolution. But

resolute steadfastness can conquer defeatist attitudes and, as is the case with Albert Einstein, result in a remarkable life story.

Attracted to Einstein’s interest in unanswered questions about the universe, author Jennifer Berne was inspired to trace his development from unusually quiet child to renowned genius.

“I write about people who fascinate me and who are interested in the same things that I love to read about and that I’m interested in,” says Berne. “The reason I wrote about Einstein is that I’m fascinated by the universe and all the mysteries that we’re just discovering and haven’t discovered yet.”

Berne’s well-paced and sometimes lyrical text explores Einstein’s life as a curious child and eventual physicist. Playful trivia, like his predilection for ice cream and disdain for socks, is injected along the way.

“It’s a lot like doing a sculpture,” says Berne. “You start with more and then you carve away. I just get a sense of a path through his life, or a thread that goes from the first question that he asked as a child to what he became later. It’s very fluid—and it’s always changing. And somehow, magically, there it is!”

Whether magic or elemental talent, Berne’s innate sense of story sculpting has a remarkable mate in the spirited, painterly illustrations of Vladimir Radunsky. Like Berne, Radunsky was fascinated by Einstein, but for a different reason. “What attracted me the most was that Einstein, like many other scientists, possessed certain qualities that made him a kindred spirit to many artists: not to take anything for  granted, often break all existing rules, and constantly ask himself and others life-defining questions,” says Radunsky.

“I thought that it would be an amazing artistic feat if I could condense all my impressions into a small book for children. If I could try to show them, using Einstein as an example, that they shouldn't be afraid of being different or of thinking differently or of things that they may not understand, and prepare them for the future world where exciting discoveries are waiting for them.”

With On a Beam of Light receiving more starred reviews than any picture book previously published by Chronicle Books, the Einstein, Berne and Rudinsky triumvirate has apparently been an artistic feat in and of itself.

Gordon West is a writer and illustrator living in Brooklyn, New York. He is admittedly addicted to horror films and French macarons.

Jennifer Berne is pictured above and to the right and Vladimir Radunsky is pictured to the left.