A Better Future with ‘Abundance’ 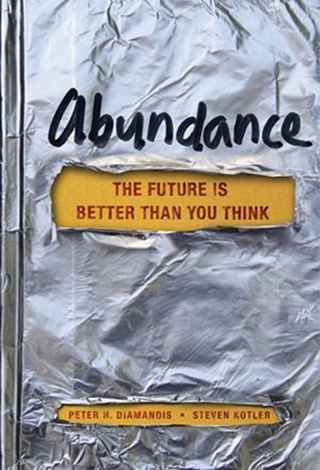 In some visions, it’s not fairly distributed either and definitely not very nice. It’s a mainstay of science fiction and science fact alike to conjecture a future world in which only the very few have the resources to live well on a ravaged planet—or ravaged otherworlds—while the bulk of humankind lives like the people of Los Angeles in Blade Runner—in other words, much like we live today, if turned up to 11.

Science journalist Steven Kotler and scientist/entrepreneur Peter Diamandis portend much better things in Abundance: The Future Is Better Than You Think. The subtitle is a slightly bit illogical, grammatically speaking, but it’s provocative. We caught up with Kotler to talk about their vision of a brighter tomorrow. “We’ve got half a century of experience thinking about these things between us,” he says, “and we’re amazed by all that’s happening.”

You venture a refreshingly positive view of the future in Abundance, one that runs contrary to a long tradition of gloom-and-disaster books about peak oil, impending famine, the coming plague and so forth. What trends do you see to support that positive outlook?

We look at four emerging forces that are having a very big impact on the world. Some are hidden from view, especially the first one, which is the exponential growth of technology.

It’s hidden from view because we’re just not wired to think exponentially. We have a brain that evolved in a local and linear environment, but we live in a global and exponential world. We think linearly, and it’s very hard for humans to understand exponential change. If I take 30 linear steps, I’m 30 feet away, or across the room. If I take 30 exponential steps, I end up a billion meters away.

Exponential growth is the reason an $8 billion computer that filled a room in the 1970s now sits in your pocket and costs less than $200. It’s why we go from the first flight at Kitty Hawk to the Sea of Tranquility in 66 years. Technology is on an exponential growth curve, and not just computing—it’s biotech, artificial intelligence, robotics, bioinformatics, 3D printing, a long, long list. It’s going to enable every human to have what only the very rich can have today.

The second force is the do-it-yourself innovator. We’ve gone from hacking computers to hacking the whole world at this point. Small groups of DIY innovators can do what just a few years ago only governments and large corporations could do, tackling grand challenges like providing electricity and drinking water to the Third World.

Dean Kamen has been working on a thing called the “slingshot” that purifies any water—latrine water, arsenic water—and makes it into the finest drinking water. One guy is going to make a huge dent in water scarcity in just a few years. High school students can now build what a few years ago only big laboratories could—vaccines for ulcers, say—and do serious science.

The third force is wealth, which is being created faster than ever before. Look at Bill Gates, for example. He became a billionaire before the age of 35. And that wealth is often going to huge projects of philanthropy and world betterment. More money has been created than ever before, and more money is going to those projects. Gates likes philanthropy, but it’s also that the biggest problems we face today are also the biggest business opportunities.

The fourth force is what we call the rising billions, the poorest of the poor. Over the next five to 10 years, 3 billion new people are going to come online. We have no idea of what they’re dreaming of, but these new minds are going to take us new places.

All these forces are overlapping and emerging, just as all our problems are tied together. There’s a lot of synthesis on the solution side, too. Climate change, food scarcity, water shortages and overpopulation are all networked. The solutions are, too.

Perhaps we’d better backtrack a little. By the “abundance” of your title, I take it that you don’t mean three cars and three TVs for everyone in the world. What do you mean?

That vision is full of liberating possibilities.

Well, we want to be cautious. Certain technologies expand personal liberty, to be sure. But technology is fundamentally neutral. The terrorists are empowered by it just as much as the do-gooders are.

What good thing might we look for in, say the next five years to support the general argument you make in Abundance?

You know the tricorder, the device from Star Trek? Remember Watson, the IBM computer that won at Jeopardy? Well, IBM has sent Watson to medical school. Soon we’ll have a huge medical diagnostic laboratory on a single computer chip, a portable handheld device that can diagnose anyone anywhere in the world better than a board-certified specialist can.

Five years, I’m not so sure, but 10 years, certainly. Algae-based biofuels, the next generation of GE, nutraceutical foods such as golden rice and biocassava—what’s coming up is astounding.

Gregory McNamee is a contributing editor to and longtime reviewer for Kirkus. His latest book is Aelian's On the Nature of Animals (Trinity University Press).