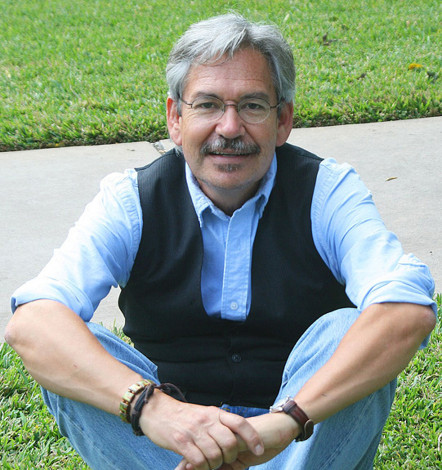 Ari, short for Aristotle, is having a tough summer. “But I still felt like a boy. Sort of. But there were other things I was starting to feel. Man things, I guess. Man loneliness was much bigger than boy loneliness.” Benjamin Alire Sáenz's award-winning young adult book, Aristotle and Dante Discover the Secrets of the Universe, is all about growing up. “Coming of age,” as Sáenz puts it. When does a boy become a man? His first shave? When he gets his first car? His first date?

For Ari, this realization is a slow-dawning one. “He's frustrated with himself,” offers Sáenz. Ari's father is tormented by war memories and his mother is sometimes preoccupied with guarding closely held family secrets, but both of them show obvious love for their youngest son. Even when Ari makes discoveries about himself they may not have chosen, they've got his back.

“We make a cliché out of parents who aren't accepting of the gay experience,” Sáenz says. “But there's a wide range of parents. There's a lot of Latino families who accept their gay sons and daughters, they just don't want to talk about it. There's no automatic rejection. There's a lot of bad parents, but for the most part, parents love their children and are doing the best they can, and I wanted to portray that.”

At its heart, Aristotle and Dante is a love story: There's love between parents and sons, love between friends and love of one's self. “I've really written a very old fashioned book, don't you think?” laughs Sáenz.

That urge to write an old-fashioned story is one reason he set his novel in the ‘80’s. “I didn't want cell phones, texts, any of that. It would've been a very different book set in present time,” he says. I knew Ari and Dante were going to be apart for a year, and I wanted them to think, 'It's going to be hard for us to communicate, we're going to have to work at it.' Today, if you have a friend who lives in Chicago, you can still text them all the time, it's like you're never apart. I wanted their communication to be more difficult.”

While his book is thoughtful, with lots of inner contemplation on Ari's part and plenty of conversations between the two boys about the Big Questions (family, love and identity), it's also a page-turner. “I know people say it's character driven,” Sáenz acknowledges, “but in my mind that happens not to be true. There are things that happen. The whole part about Ari's accident has to do with manhood and boyhood and how we relate to nature and what is natural for these boys. Ari’s instincts are that he would do anything for Dante, but he doesn't understand it on an intellectual level, only on an instinctive level.”

The thoughtful parts feel natural to Sáenz, because he himself has always been a thoughtful person. “I'm an introspective man,” he says. “I spend a lot of time in my head. I did when I was a young person, but

I'm not sure I'm that unusual. I think a lot of people spend time in their heads, and it's a perfectly normal thing, especially at that age. That's when you’re asking those questions that matter so much.”

Sáenz recently had the honor of winning the PEN/Faulkner Award for Fiction for his collection of short stories, Everything Begins and Ends at the Kentucky Club. He is the first Latino to receive the award, and is no stranger to the questions of identity that Dante and Ari discuss. “I think for a lot of Mexican Americans, one of their issues is identity. Am I Mexican? Really? My mother was always saying, ‘You're Mexicano,’ and I'd think, ‘Really, Mom? We don't live in Mexico!’ ”

Discovering the secrets of the universe may sound like a tall order for two teenagers, but for Sáenz, his plot is a natural, insistent one. “

Asking questions, especially at that age—it's what we do.”

Andi Diehn is a writer living in New Hampshire.