A Young Girl Learns the Value of Questioning Authority 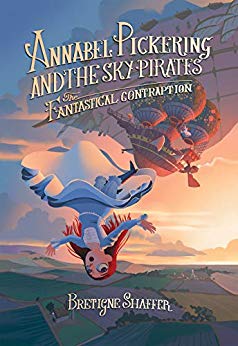 In Annabel Pickering and the Sky Pirates: The Fantastical Contraption, 13-year-old Annabel, a latter-day Pippi Longstocking, gets ensnared in a battle between authoritarians and freedom fighters after her parents are kidnapped by the police, who turn out to be the bad guys. She finds herself assisted in her own escape by rebel pirates, who turn out to be the good guys.

Bretigne Shaffer, a journalist who has turned to full-time fiction writing, considers themes of betrayal in Annabel Pickering. The middle-grade adventure book follows Annabel’s steam-powered adventures, which transport her from an elite girls’ school to the rule-breaking world of buccaneers. Set in an alternate 19th-century England—illustrated via Florian Garbay’s black-and-white images—Shaffer explores Annabel’s psychological changes as she sees loved ones’ darker sides. Shaffer explains that she wanted to show children the “nature of empire and war, freedom of speech and thought, [and] how prohibition affects society.” She also, she admits, is interested in pirates, having briefly written about piracy in the South China Sea in her past life as a journalist.

In Shaffer’s novel, which Kirkus calls “an engaging introduction to a world of wonder and intrigue,” children are brought up to respect the queen and the near-autocratic rule she enforces over her kingdom. When Annabel’s parents are abducted, she manages to evade capture and takes refuge with eccentric spinster Miss Doubtweather. Eventually Annabel, Miss Doubtweather, and her niece escape with the band of ill-mannered, law-breaking, fabulously brave pirates.

As Annabel’s understanding of the complexities of intellectual and social freedom evolve and she learns that her kidnapped parents were part of a secret society of freethinkers, she begins to view them as moral heroes. This is heady stuff for middle graders, but Shaffer makes it accessible and age-appropriate. It’s also, she believes, essential for younger readers, particularly American ones, to think about the price individuals and societies pay when respect for authority turns into reverence.

“At this point in history, I feel that culturally, the U.S. is far more authoritarian than many other countries,” Shaffer says. “One example that struck me recently was seeing a sign in a restroom warning that employees were required by law to wash their hands after using the restroom. It seems to me that the American mentality has become such that we cannot conceive of accomplishing important things without force or of getting along together as a society without the threat of force everywhere.”

But as Shaffer shows in Annabel, force can be met with resistance, as explained by Annabel’s friend and confidante with regard to the bad forces at work in the government:

“The law is precisely as you stated,” Miss Doubtweather continued. “But there is the law, and then there is….” She paused, as if searching for the best way to articulate her thought….“There is what actually happens,” she said at last. “And it is not always in accordance with what the law says.”

“We suspect,” she continued, “that your parents have not been taken by the regular police at all, but by the Queen’s Guards.”

“The Queen’s Guards?” Annabel was puzzled, and frightened. “But aren’t they for….” She could not bring herself to say the words.

Shaffer’s ability to weave a number of subplots into an engaging, thought-provoking tapestry in Annabel was honed during her years as a journalist in Asia for the Wall Street Journal. While there, she began to see the different ways in which freedom and authority influenced human behavior. “I saw it in…the expressions on people’s faces during the late ’80s in Shanghai, when everyone’s lives were very much dictated by those above them,” Shaffer says. “Or the way [they] treated animals in the zoo. When I first visited, people would stand around the cages and throw rocks at the animals, taunting them….After several years of economic liberalization…[they] stood around the cages and threw food in to the animals.”

As a journalist, Shaffer “wrote about the economic costs of authoritarian policies and human rights abuses,” but she wanted to delve deeper. So she turned to fiction. The author, who currently lives in Los Angeles, thinks of her transition from journalism to fiction as an evolution in her own method of storytelling and also as a way to honor her recently deceased father, Butler Shaffer, a well-known writer among libertarian thinkers.

Her father taught her to think about the world she lives in. “I watched over the years and decades as his writing became less overtly political and more concerned with the psychological and spiritual causes and consequences of institutionalized force,” she says. “While we have had very different writing styles and interests, my own work now is also in some way a continuation of his work.”

Readers can trace that evolution across her five fictional works: Memoirs of a Gaijin, Why Mommy Loves the State, Urban Yogini: A Superhero Who Can’t Use Violence, Urban Yogini: The Christmas Episode, and Annabel Pickering and the Sky Pirates: The Fantastical Contraption. Yet ultimately, all of her fiction tells the human story of good versus evil, as expressed through our ways of trying to control or evade control.

Shaffer is currently working on a sequel, Annabel Pickering and the Sky Pirates: A Dark Frequency. “I believe that reverence for authority is the single most dangerous human trait and is largely responsible for the most brutal human catastrophes in our history,” Shaffer says, “certainly in the past century.” One way to deliver that message to children is by history lessons—sober recitations of the horrors inflicted by Mao, Stalin, and Hitler. Children should hear those stories. But another way is through tales that teach them how “to not just accept as truth another person’s view on something simply because they are an authority on [it].”