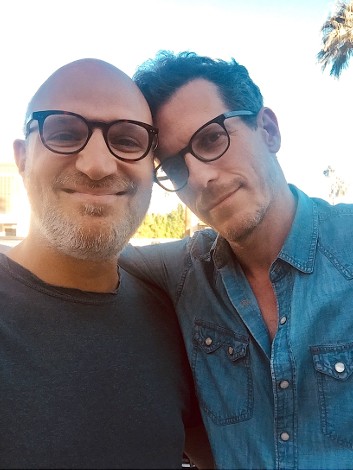 No magnifying glass is needed to see that Brian Selznick and David Serlin’s Baby Monkey, Private Eye revolutionizes storytelling in pictures and words.

The seriously sidesplitting tale of a petite primate cutely cracking cases is the first book by Selznick, author of New York Times bestsellers The Invention of Hugo Cabret,Wonderstruck,andThe Marvels,and Serlin, a writer, editor, historian, and professor at the University of California, San Diego.

“Baby Monkey, Private Eye came out of the fact that, when David gets really tired, he gets this adorable kind of shuffle that has always reminded me of a baby monkey,” Selznick tells Kirkus about his husband. “So over the years, when we were just laughing about it, we would try to think of the funniest job Baby Monkey could have and pretty quickly settled on private eye—because what else would a baby monkey do?”

Baby Monkey, Private Eye may be the first 200-page hardcover picture book in existence. It must be the first to boast a full bibliography, index, and image key.

Baby Monkey, Private Eye’sfive chapters are variations on a heist. “The Case of the Missing Pizza!” for example, begins with Baby Monkey reading up on “Famous Pizza Crimes” in an office adorned with a map of Italy, photo of the Roman Colosseum, and bust of Michelangelo's David.

“Baby Monkey! Someone has stolen my pizza!” cries a mustachioed chef with outstretched arms, pencil-drawn in Selznick’s signature crosshatch style.

Baby Monkey looks for clues, writes notes, eats a snack, (hilariously) puts on his pants, and solves the crime.

“The form is the structure of it,” Serlin says, “and the repetition is not just for early readers. For the librarian or the parent or the older sibling who reads with the child, that gives it momentum and flow. So by the time you get to Baby Monkey taking a nap, it’s a delightful surprise, because we’ve become accustomed to a certain [arc].”

No, but seriously—once and for all, how do you categorize Baby Monkey, Private Eye? Is it a picture-chapter book? Chapter-picture book? Primate primer?? Nursery noir?!

“When we realized that the storytelling would take place visually and the narrative points would be directed at younger kids,” Serlin says, “Baby Monkey started to kind of have the feel of what Brian’s done with books like Hugo and Wonderstruck and The Marvels, modified for kids who are learning to read. But none of this is like, hey, Hugo plus Green Eggs and Ham equals....”

“—there was no elevator pitch,” Selznick says.

“Right! There was no elevator pitch.”

“We don’t really think about the format per se, other than, what will make this story work best?” Selznick adds. “And seeing page after page after page of a little baby monkey trying to put his pants on just seemed satisfying.”