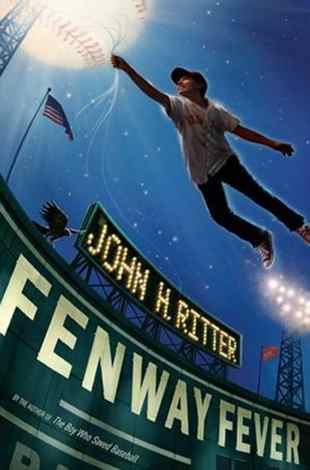 Season tickets have belonged to Stats' family for a couple of generations, so Stats gets to see a lot of baseball games. But in Fenway Fever, the 2012 season is gearing up to be a rough one—the Red Sox are playing badly, and the Fenway crowds are treating them even worse.

Is the losing streak going to last all season? Can a young boy with family problems and health issues help the team find their stride? Perhaps magic really can happen on the famous field even after the professionals have gone home. John Ritter shares his love of the game and his belief in the power of positive expectation.

Did you grow up around Fenway Park like your character?

To capture Fenway for this book, the last time I went there I took pictures and vivid notes, and now we have the benefit of the Internet, so you can re-create the situation pretty closely. The first game I went to I actually sat on the old wooden seats, and so I had that experience inside of me.

And I said this in the book, Fenway represents all the baseball parks and baseball itself. If your heart is in baseball, your heart is part of Fenway. It was from that standpoint I felt I had the authority to recreate this ballpark on the page and try to bring it as alive as I could for the readers.

What do you think is the relationship between baseball and superstition or spirituality?

I love that aspect of the game. It is a superstitious sport. There are certain players who will make a stand and say, "I'm not superstitious," but in a way, just making that statement is superstitious.

It's superstitious, it's ritualistic and it's spiritual, and it's unique in that regard. It's a very difficult game to trace the roots of—it goes back through ancient games. I really feel it's connected to Native American games instead of say, rounders, which came over with the Europeans.

As far as the spiritual aspect, I became aware when I started the book in 2010 that my publication date was going to be in 2012. We have a lot of prophecy connected with that year. Most people in our culture jump to a doom-and-gloom scenario for the end of the world—an apocalypse.

But many of the aboriginal belief systems around the globe talk about this shifting era, and none of them talk about doom and gloom. They say, yes, the old is ending, but the new is beginning, and the new is going to be much better than the old. I wanted to promote that.

When Stats stood up and said, "When I hear my friends in the stands boo my friends on the field, I don't like it,” when a child addresses the crowd in these most simple, innocent, honest terms, he's saying we have a choice, we don't have to talk this way. That, to me, was from the heart.

Why is it important for kids to read about the kind of sportsmanship Stats calls for?

I see the child as a clean slate—these habits have not yet taken root, but they're born into a culture in which bad behavior is standard and accepted. That's why Stats addresses the adults in the crowd and not the Little League team.

I hope what the young reader will get out of this is a sense of "Well of course, that's how you treat people, that's the way you do it. What I've seen on television and in the grand stands, that's not the way I want to go." It's a much better thing to come here, root for the team and hope for a great game and take the best parts of it and leave the rest behind.

Were you ever superstitious about setting the book during the baseball season of 2012?

I'm fearless about it. It was the story I wanted to tell. There's a kind of mythology in literature, especially children's literature, that if you cite a song or name a date, then it will age your book and the kids won't read it. But I don't buy that. If you tell a good story, it's ageless.

I created this parallel universe, this parallel world, and this is the story of their 2012 season, this is not meant to be historical. It's the capturing of a moment in the universe when all of these time lines come together and this one boy, this motherless child, and this quirky, goofy professional baseball player decide to join forces and change the world.

I look at it that way. It'll stand on its own. Most of my stories have a date in it and it's fine. If it's a good story and it has something to say it will survive.

Andi Diehn lives in a house full of books in Enfield, N.H. Visit her shared blog at www.letusgothen.net.