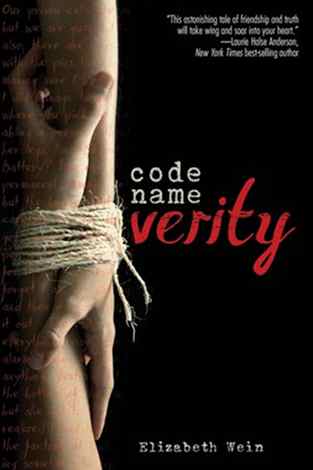 @SarahRettger @LizB Just hit 68% and burst out with, "Oh my god. Omigod. OH MY GOD!" so loudly that I made Josh jump.

And two more that I posted a full 12 hours after finishing it:

@SarahRettger @LizB I was just talking to a student about it and burst into tears at the circ desk. I rule.

Later, my long-suffering officemate talked me down when I burst into tears a third time, but I was too wrecked after that to tweet about it.

What I’d really like to do here is just post the first few pages. To let our narrator speak for herself, explain her situation, to allow her to pull you in the way she pulled me in. Her captor, SS-Hauptsturmführer von Linden, calls her Scheherezade for a reason. Her confession begins, “I AM A COWARD.” And then she proceeds to tell the story of how she ended up in Occupied France as a prisoner of the Nazis, starting all the way back before she’d ever even met Maddie Brodatt, girl pilot.

She’s completely upfront about her decision to tell the Nazis everything she knows. She knows that the other prisoners despise her. And she knows that...well, I’ll let her say it:

I’m just damned. I am utterly and completely damned.

Despite her guilt and self-loathing about breaking under torture, her voice is supremely fierce. Despite the ever-more violent consequences, she takes a ferocious joy in needling her captors. Despite her surroundings and her situation, her personality, wit and intellectual vivacity make her crackle and shine. Despite the torture she continues to endure, despite the failure of every escape attempt she’s made, despite the impending doom that she faces, her humor and her anger make it impossible to completely lose hope.

There’s tons more I’d love to praise—the beauty of the plotting, for one, the fact that the Nazis are depicted as actual people for another—but it’s one that you need to experience for yourself. Once you’ve finished, we’ll talk. Because, wow: there’s a whole lot to talk about.

Trust me? Add this to your list. Don’t trust me? Add it to your list anyway. Fan of historical fiction? Espionage? World War II stories? Add it, add it, add it. Even if your tastes don’t usually tend in that direction, you need to pick it up anyway. It will make you dissolve into a puddle, and then, once you’ve recovered, you’ll immediately read it all over again. That’s what I did.

If it doesn’t get some serious awards love this year, it’ll be a crime. A CRIME.

*On my e-reader, hence the percentages rather than page numbers.