The Curious Incident of 'Colin Fischer' 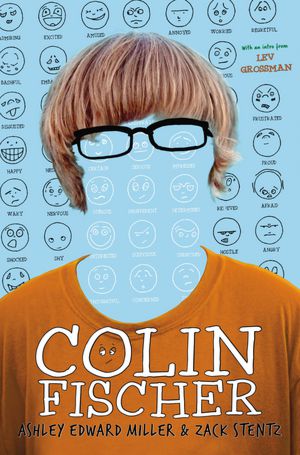 As it’s bound to be the first thing most people notice about today’s book, let’s just get it out of the way: With only a few changes, a synopsis of Mark Haddon’s The Curious Incident of the Dog in the Night-time could double for the description of Ashley Edward Miller & Zack Stentz’s Colin Fischer.

Christopher Boone Colin Fischer, a 15-year-old 14-year-old boy with a strong appreciation for math, Sherlock Holmes’ detective skills, a violent dislike of the color yellow blue and a condition somewhere along the autism spectrum Asperger’s syndrome, steps out of his comfort zone and puts his own deductive reasoning to the test in order to solve a mystery that begins on his own front lawn in his high school lunchroom.

Bookshelves of Doom weighs in on Daniel Marks' 'Velveteen.'

So, yes. In some ways, Colin Fischer is a watered-down, more crowd-friendly Curious Incident geared towards a younger audience—if it were a movie, it’d likely get a PG rating rather than the R* that Haddon’s book would get for profanity alone**—but that isn’t the only thing it echoes. Colin regularly uses his knowledge of animal behavior in his ongoing attempts to understand his classmates, and for any reader who has seen it even once***, those passages will immediately bring Mean Girls to mind. Clearly the authors were aware of that, as they reference it (or, rather, the book it was based on):

Colin created a “Queen Bees” category to capture girls who seemed to have no talent or interests beyond the maintenance of their own popularity—a heading he took from the title of a best-selling book on the social anthropology of American high school girls****.

Which, for me, made the lack of hat-tip to Curious Incident that much more glaring, but I swear I’m over it.

Did I enjoy Colin and his quest to clear his childhood tormentor’s name? Yes. Did I appreciate the crusty-and-strict-yet-awesome gym teacher? Yes. Did I enjoy the brief glimpses of Colin’s parents’ marriage for their friendly banter and understated affection? Very much. Did I root for Colin and Melissa’s obvious (and super-cute) attraction to blossom into something more solid? OF COURSE!

Is it likely to make my Best Books of the Year list? Nope. But my reasons for that have less to do with the familiarity of the storyline and characters and more to do with the fact that the book reads more like a novelization of a movie script—or a novel written to pitch a television show?—than it does a novel-written-for-writing’s-sake. Much of it feels sketched in, as if left to the actors to step in and make the two-dimensional characters into real people. Truly, with the right director and cast, it could make a really decent, offbeat, feel-good teen movie. (Or show!) But as a plain-old-words-on-a-page book, while enjoyable, it feels phoned-in: lacking in real honesty and energy.

I’ve been dissatisfied with the last few books I’ve read for this column, so I’ll end this one by throwing out a title that I can wholeheartedly recommend. If you’d like to read a he-said/she-said romantic comedy in which one of the leads, like Colin, has Asperger’s syndrome, do yourself a favor and pick up The Half-Life of Planets by Emily Franklin and Brendan Halpin. It’s super-adorbs, and deserves to be known by far more people.

*Assuming that the oral sex jokes fly over the censors’ heads, as they did Colin’s.

**Not that I’d want it any other way!

***Is it humanly possible to watch it only once?

****Quote taken from an advanced copy, and therefore subject to change.