From 'In Darkness' to Light (and Some Fame) 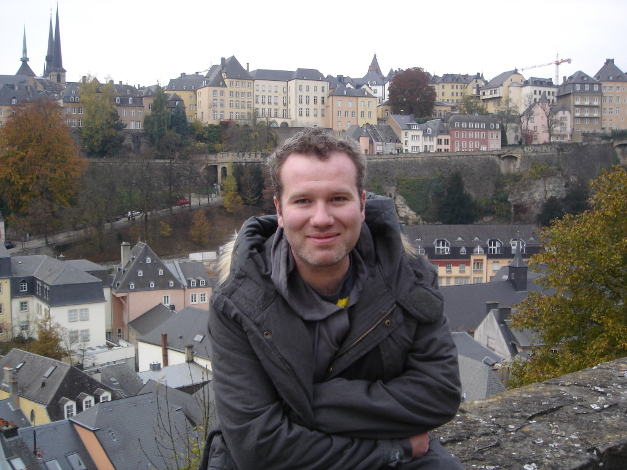 Nick Lake’s In Darkness is a book our reviewer called “engrossing, disturbing, illuminating.” It’s the story of Shorty, a Haitian teen jammed under the rubble of a hospital in the aftermath of the catastrophic 2010 eathquake that devastated an already impoverished country. Shorty drifts in and out of consciousness, and as he’s waiting to be rescued, he hears the voice of Toussaint L'Ouverture, the 18th Century slave and revolutionary leader who transformed Haiti from a slave-owning nation to one of freedmen. In Darkness was considered a real dark horse (pardon the pun) leading up to the announcement of this year’s Printz Award, which is given by the American Library Association to the best book for young adults published in the past year. Everyone was buzzing at the January ALA conference about why John Green’s The Fault in Our Stars wasn’t picked. We called Lake in London, where he’s the editorial director for fiction at HarperCollins Children’s Books in the UK (as well as the author of two previous novels) to ask him what it’s been like to receive the young adult world’s most prestigious prize. He still seemed a little surprised by the recognition.

Q: How does receiving the Printz Award alter the book's life?

A: It’s certainly altered my life in the sense that I’m deluged with people sending me tweets. I’ve been pretty obscure up to this point. I’m very conscious of being the dark horse – it’s not something I was expecting. Green’s book has loomed so large over the past year, so I just assumed it would win. It was quite a surprise, really. I’m quite taken aback and grateful, I suppose, because you sit on your own if you’re an author writing a book and you don’t have a lot of dialogue about it until your wife and agent read it and to get this vote of confidence is very nice, but strange.

Q: You’ve said that In Darkness is ultimately a book about hope. But some teens may feel that the life of a Haitian earthquake victim is far removed from their own struggles. How does Shorty's life, as he comes in and out of consciousness after the earthquake, relate to a teenager in Delaware who's never experienced a major catastrophe, for example?

A: I guess I’ve never experienced a major catastrophe, either, but for me, the feelings that people have regardless of their circumstances are universal. Whether you’re a teenager in Delaware and your father is killed crossing the street by a car or you’re in Haiti and your father is killed by a gang and you’re in an earthquake, I think the feelings are the same. Everyone feels the same fears. I suppose in Shorty’s circumstances, his needs are water, food and security but the human emotions are otherwise the same. When I was writing it, there was some medical news I was waiting for and I didn’t realize this until after I wrote the book, but it could have been very bad or not very bad and I realized afterwards that I was so strongly identifying with Shorty – I wasn’t buried under rubble, but I was waiting  for this thing that could have been bad. My father died in a very violent way and Shorty’s dad died in a very violent way and I guess I was pouring my feelings about that into him. I was so fascinated by what it would be like to be trapped by that.

Q: Some editors I know find it hard to work in publishing and also work on their own writing – it's too difficult to turn a critical eye towards other writers' books during the day and then be forgiving enough of themselves when they're eking out their own novel at night. How are you able to manage both duties?

A: No one’s ever put it quite that way before-that’s an interesting way of putting it. I view it as a continuum–it’s all the same thing. The critical thing you’re talking about comes in more when I’m commissioning and I don’t buy things I don’t love. But in terms of editing stuff, it’s all the same job and the only difference when I’m writing is that it’s a lot harder and I have to go back and revise. When I’m editing, I get the easy job of sending the notes–‘You might want to expand this or alter that’ and then they have to go change it. I can’t edit myself, either, I need an editor. I believe in editors; I am an editor. My wife always reads everything first–she’s my toughest critic and then I’ve been lucky to have wonderful editors.

Q: In Darkness is a real departure from your previous titles, which were historical fantasies about vampire ninjas – how did you negotiate the transition from those to this book?

A: I think by almost making the conscious decision to not think about what I was going to do. In the past, I’d probably been too influenced by my day job and I was consciously thinking, ‘There isn’t all that much that competes with Twilight for teen boys,’ whereas with In Darkness, I didn’t have plans to show it to anyone else. I didn’t know who it was for. I thought it was a difficult book in many ways and I was writing something for the pleasure of writing it as opposed to creating something. I always thought it was terribly pretentious when a writer would say that writing was like words coming though them or music coming through them but I really felt that with this one. I felt like I was a conduit. It seemed to flow out of me–Shorty’s voice was very, very real and immediate to me and he seemed to be a real person to me. It was a very weird experience.

Claiborne Smith is the features editor of Kirkus Reviews.