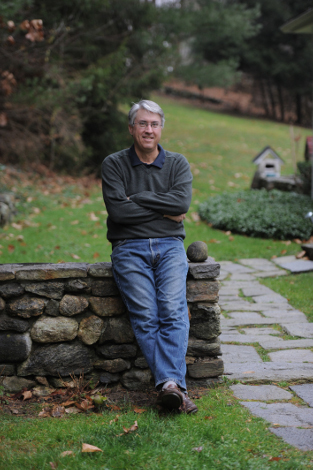 The American West has long been a place of myth and wonder, of dramatic canyons, mesas, and mountain ranges. These dramatic landscapes have wooed Americans for centuries, and The New Yorker’s David Owen isn’t immune to its siren song. Though Owen has lived in Connecticut for most of his adult life, he spent the summers of his youth in the Colorado countryside, and the draw of the West has stuck with him ever since. So when Owen decided to tackle the issue of water, an admittedly “huge topic,” it was an easy choice to return to the Western United States’ lifeline: The Colorado River.

“The useful thing about the Colorado River is that it’s not incredibly long, and we use it up,” he says. “It’s a unique feature for a river: it doesn’t get all the way to the end.” In Where the Water Goes: Life and Death Along the Colorado River, Owen traces the Colorado’s consumption firsthand, traveling along the river from its source in the Rocky Mountains to where it peters out in Mexico. Along the way, he meets with the farmers, water managers, and conservation leaders who have serious stakes in how, when, and where the Colorado River’s water goes.

Following the labyrinth of consumption rights, “wet water” versus “paper water,” and a seemingly endless spiral of water laws out west would be dizzying without Owen’s concise, lively storytelling and the complex figures that fall on both sides of the arguments. Whether an environmentalist or someone who doesn’t think climate change is affected by human activity, readers should table all presumptions or risk having their notions questioned at every turn. Owen’s writing masterfully walks the line between both sides, past and present, and often butts the West’s sometimes very strange history up against its current-day predicaments. He also never lets the reader forget that whether they agree or disagree, the consequences are, constantly, very real. “Water is different from other environmental issues in that, if you have a water problem, you have to solve it, because people die if they don’t have enough water,” he says.

Perhaps the biggest complication that must be understood about the Colorado River is this: when the river’s annual water allotment was divided among the Western states in the early 20th century, the West was experiencing one of its wettest periods in the past millennia, but the laws have never been amended to account for this over-calculation. Simply, more water was, and is still, allocated than there is water to give. “I think that the practical question is, How do wemanage this limited resource right now? The rate at which we use it is literally not sustainable,” Owen explains. “You see it in the levels in the lakes and also in the groundwater levels.”

When Owen says you can see it, he means literally. This is perhaps most noticeable in the staunch white, bathtub-like stain around one of the West’s two major reservoirs, Lake Mead, whose water level rests more than 100 feet below capacity. In recent years, the stresses on the Colorado have amplified, and as population continues to increase, this trend seems likely to continue. But the beauty of the West, the draw that brings people every year to the canyons, mesas, and mountains, also inspires people to fight for these places and the water so vital to their survival. In fact, sometimes, having a problem to solve spawns progress. “Never let a good crisis go to waste,” Owen says, echoing advice given to him during his research for this book. “It’s when you have people’s attention, and they’re willing to make sacrifices that they aren’t willing to make when the crisis goes away. If you deal with the environment not at the ideological level but at the local level that impacts you, people want clean water and clean air…It’s not a bad thing to fight these issues out in the open.”