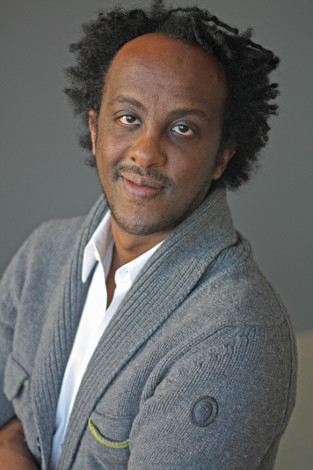 Dinaw Mengestu’s sober, tender third novel is essentially a love story. African exchange student Isaac falls in love with Helen, the social worker facilitating his transition to Midwestern America. As told in parallel narratives, his and hers, it’s also a bit of a mystery: What draws this disparate pair together? Does Helen know what she wants, and is Isaac who he claims to be?

All Our Names is set in two times, two places. We first meet Isaac in Kampala, Uganda, circa late 1960s. The university students are trying on radical politics in the hopeful window between colonialism and the establishment of a native government. Isaac is among them: “When Isaac and I first met at the university, we both pretended that the campus and the streets of the capital were as familiar to us as the dirt paths of the rural villages we had grown up and lived in until only a few months earlier, even though neither of us had ever been to a city before, and had no idea what it meant to live in such close proximity to so many people whose faces, much less names, we would never know,” Mengestu writes.

The narrator and the Isaac of whom he speaks do not share that name by coincidence. Some time later, when he’s living in the Midwest, it becomes clear that the narrator has adopted his dear friend’s name, though it is not yet known why. The story undulates through time and space, back to Africa, where the original Isaac has been recruited by Joseph, the charismatic leader of a band of revolutionaries.

Henceforth, All Our Names features a trinity of couplings. “I think of All Our Names first and foremost as a story about three different forms of love: there’s Isaac and Helen, the two friends (the narrator and Isaac), and Isaac and Joseph. It’s all about different expressions of love, the different pressures, constraints and, not necessarily violences, but challenges that all three pairs are forced to confront,” says Mengestu. What each will do for love runs the gamut from care-taking to committing atrocities. There will be violence: Joseph’s foot soldiers argue about whether they’re “revolutionaries or liberators,” though it seems others may call them terrorists.

The importance of words, names and labels, and how they contribute to form identities and societies are of especial interest to Mengestu, an Ethiopian emigrant whose family settled in Peoria, Illinois when he was three years old. His earlier novels, The Beautiful Things That Heaven Bears and How to Read the Air, focused closely on the stories of immigrants whose sense of self evolves in the movement between worlds. He considers All Our Names to be both an evolution and extension of those themes, the final book in a sort of trilogy.

While Isaac is a familiar character for Mengestu—one who originated in an unpublished manuscript “sitting under a bed at my parents’ house, where it shall remain forever”—Helen’s narration broke new ground and proved an unanticipated pleasure to write. “I really liked her voice right away and, in her case, I didn’t have to do this juggling in my head of two people carrying the same name, so there was a sort of clarity to who she was,” he says. “She allowed me to write about America from the inside, not from the point of view of a character who’s a migrant or refugee, but really from the point of view of some of the people I grew up with, and that was something I had been intimidated to try for a long time.”

Mengestu seamlessly inhabits her consciousness as well as Isaac’s with emotionally nuanced portraits that are poignant and compelling. “Ideally, fiction affirms our ability to empathize with people beyond the limited confines of our own personal realities,” he says. In that regard, All Our Names is a bold success.