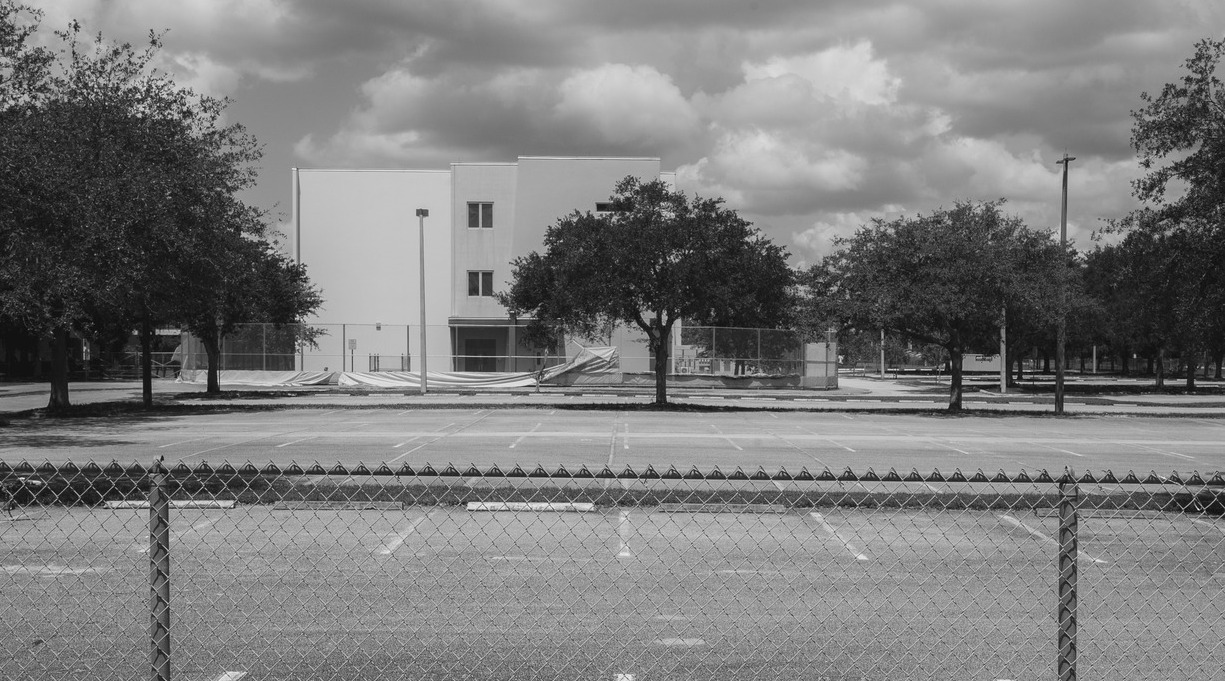 Gun violence continues to plague us every day in America. Countless books have addressed the issue from a variety of angles, but few are as powerfully concise and thought-provoking as the aptly titled Bloodbath Nation by Paul Auster, with photographs by Spencer Ostrander (Grove, Jan. 10). In this elegantly structured combination of history, memoir, current affairs, statistical analysis, polemic, and photojournalism, the author and photographer deliver what our starred review calls “a harrowing, haunting reflection on the routine slaughter wrought by guns.” I spoke to Auster and Ostrander via phone from their respective homes in Brooklyn; our conversation has been edited for length and clarity.

Tell me about the germination of this project.

Spencer Ostrander: I was outraged about another mass shooting, but I didn’t want to make victims or victims’ families relive the trauma. I started going around and taking photographs of some of the locations of the shootings. After about a year, Paul asked if he could write the text, and that’s when it became a collaboration. I wanted these photos to make Americans think about their everyday life. Sadly, these places are everywhere in the U.S.

Given the disheartening frequency of gun violence, how did you decide which photos to include and what historical elements to highlight?

Ostrander: I looked up every mass shooting around the country. However, I didn’t want to make an encyclopedia, so I thought, which photos would showcase a specific area and stick in people’s collective memory?

Paul Auster: Mass shootings are just a sliver of what goes on with guns. I wanted to look at the whole history of America and guns, which goes all the way back to the Colonial period. We’re talking about a state of armed conflict from the beginning, with the Native American population that the British were usurping and then the imposition of slavery.

You describe the Second Amendment as “an ambiguously worded, bizarrely punctuated sentence that sat quietly on the first page of the Bill [of Rights] and was largely ignored for most of our history.” Why has it become such a flashpoint today?

Auster: Interestingly, the Black Panthers had a fundamental role in changing attitudes about what guns were for in the U.S.—self-defense rather than just shooting animals in the woods. The irony is that the White right learned from the Black left about how to reframe the issue. So much of what happens in America comes down to race. Think about the spectacle of Black young men striding along the streets of Oakland carrying loaded weapons. It scared White America so much, but the Panthers did it to protect themselves. The Oakland police force was almost entirely White, and there were tremendous racial divisions and unfairness in that city.

Let’s discuss outrage and residual trauma. How can we approach the issue without falling into despair?

Auster: Entire communities are forced to deal with it, and it seems like America is constantly in mourning.

This is a big problem, and I’m not proposing that we can solve it overnight or anytime in the foreseeable future. The flaw is in a government system where the minority can control the majority. When you have an Electoral College in which you can elect presidents who don’t win elections—and when you have a Senate in which Wyoming, which has 500,000 people, and California, which has 40 million, have the same number of representatives—this is not democratic. Consequently, a few fringe fanatics can guide the conversation. There are more people who want gun control then there are people who have a blind allegiance to the Second Amendment.

What Spencer and I have talked about endlessly is that our goal in writing this book is to present the issue in such a way as to open up the possibility for conversation in the country. I don’t think even the most die-hard believer in the Second Amendment thinks that it’s OK for 40,000 people to be killed by guns every year. If we see that this is a legitimate health crisis, maybe we can figure how to make changes that will at least make America safer. No other country has this problem.

Deep systemic issues will take years to properly address, but what else can we be doing to slow down the violence?

Auster: Outright bans don’t work. There’s already 400 million guns circulating, so it’s too late to stop it. We have to cooperate. But maybe it’s gotten so bad that a turn is coming down the road. The midterm elections at least partially demonstrated that people don’t want utterly crazy people in government. On another note, I’m glad you talked about the photos, because they’re an essential part of the book.

Talk more about the photos.

Auster: The reason why I think these photographs are so brilliant is they force the viewer to use their imagination. They’re anonymous places with not much to distinguish them, these ugly little spots on the American landscape. But each place witnessed such mayhem and chaos and violence, and it makes you think about how it can erupt anywhere, at any time. By alternating chapters of prose with portfolios of photographs, you get a pause from the text, which is very intense, and you can commune with yourself about what you’ve been absorbing. If one reads the book with an open heart, one will have an emotional as well as intellectual experience.

Ostrander: If it was only words, it would be so dense. If it was only photos, it would come off as pretentious. Paul and I are not interested in true crime, and I’m not an ambulance-chaser photojournalist. We didn’t want to make this book; we needed to. It was extremely difficult. Paul has said that this is the hardest book he’s ever written.

Auster: By far. I don’t use a computer, so Spencer provided me with tons of research from the internet, and I must have bought 20 books on gun violence. But I didn’t want to go on and on, so I kept boiling down the prose in order to stick to the essence of what I was trying to say. In the first two chapters, I told stories about myself because I wanted to establish my credentials as someone qualified to write this book and not just some novelist from Brooklyn with his head in the clouds. My family was destroyed by gun violence. When someone is gunned down in your family, you never get over it. You’re horrified for the rest of your life, and it perverts whatever is pure and good in you into something broken. We are committing grievous injustices against one another that resound through the ages. They’re not just isolated little crimes that go away.

Spencer, can you share more about your travels for this project?

Ostrander: At one site, I saw a groundskeeper and told him I was doing a book about gun violence, and he said, “Thank you. I met a survivor whose husband got shot in Las Vegas.” He was happy that people are going to be talking about this. As I continued to work, my outrage grew. You meet families and understand that this is not an abstract idea. This is real.

How can we move forward?

Auster: I don’t care who those other people are. As long as they’re not completely crazy, I would talk to them. However, they have to be rational enough to be able to abandon their own ideas for a second. Stop grinding your ax, and listen to someone else. I know this little book isn’t going to change everything, but I’m hoping that it will get people to start rethinking this issue.