From the Editor’s Desk: Gay Life in the News and in Books 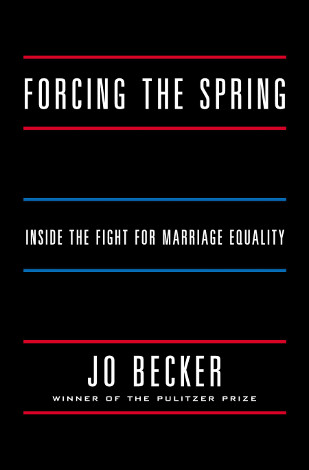 Every time some new headline about gay people courses through the news—that would be every day lately—I say a little prayer of thanks for writers, the publishing industry and those of us who write about books. The cultural strife that marriage equality and anti-discrimination legislation engender can be such a wellspring of inspiration for artists. Not that long ago, gay issues didn’t make the news, and there were a few good books about us; now everyone can’t stop talking about us, and there are more good books.

It’s a profuse, rich moment in LGBT publishing. We gave a star to Jo Becker’s Forcing the Spring: Inside the Fight for Marriage Equality (Apr. 22), which covers the legal battle surrounding California’s Proposition 8 and the Defense of Marriage Act. Our reviewer says that Becker’s writing is “brisk and urgent.” We also loved Francine Prose’s latest novel Lovers at the Chameleon Club, Paris 1932 (Apr. 22), about enigmatic lesbian Lou Villars: athlete, dancer, race car driver and German spy. Tom Spanbauer’s name is whispered in hushed tones of reverence by other writers who’ve read him. His novel I Loved You More (Apr. 1) is about a love triangle among a gay man who falls for a straight man, then falls for a straight woman until the two heterosexuals fall for one another. Another writer with cultish devotees is Keith Banner, whose new story collection, Next to Nothing, from small press  Lethe Press, features a cast of working-class gay men, so neglected in fiction. “I love her like you might love a stubbed toe if the rest of your body was numb,” one character says about his sister. Christopher Isherwood and his boyfriend, painter Don Bachardy, were together from 1952-1986, but when they were in different

places, they wrote letters to one another in which each took on the persona of an animal, Isherwood a stubborn old horse named Dobbin and Bachardy an impetuous Kitty. It sounds so strange on the face of it, but reading The Animals: Love Letters Between Christopher Isherwood and Don Bachardy (May 13), you see how useful the animals were to the success of their relationship. Michael Cunningham’s novel The Snow Queen (May 6) is about a gay man unsettled by a breakup who is forced to confront deep questions about magic and spirituality after he sees a “pale aqua light” over Central Park one night. It may be difficult for Emma Donoghue to ever again attain the kind of sales that her 2010 novel Room achieved, but her latest, Frog Music (Apr. 1), possesses her same knack for creating atmosphere as that best-seller did. It has a lesbian element to it that involves a secret romance, so rather than spill the beans, I’ll shut up now.