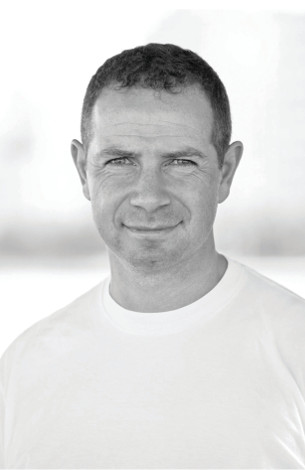 When Elisha Cooper’s four-year-old daughter Zoë was diagnosed with pediatric kidney cancer in 2007, the doctor’s proclaimed it a “good cancer.” What a “funny pairing of words,” Cooper responds to that phrasing in his new memoir, Falling: A Daughter, a Father, and a Journey Back. Surgery is swiftly arranged, the tumor removed, Zoë begins chemotherapy. Within a month, they pack up and move from Chicago to New York City for his wife’s new job. In New York, Zoë undergoes 22 more weeks of chemotherapy, then treatment is over.

If this story seems to be moving in fast forward, it’s meant to. Diagnosis, surgery, treatment, it all wraps up shortly after the outset of the book. Chemo is followed by years of “daunting” post-treatment CT scans. In between scans, a lull of normality returns—baseball games, family outings, school. Then, every few months Zoë is placed into a machine that could instantly betrays her clean bill of health. Cooper constructs these visits to banal doctor’s offices with the tension usually reserved for thrillers, the reader desperate for the words “all clear” to appear on the page.

As a father keen on raising his daughters to become strong, powerful women these appointments render him suddenly powerless. “Here’s this thing that came into my life that I had no control over,” Cooper, a renowned children’s book author and former college football player, says. “With football, writing books, art, I had control, and then here’s something so beyond the realm of anything I knew.” After each “all clear” visit, Cooper’s fears temporarily subside and they visit parks or farms where he insists his daughters climb trees, take risks, fall, get back up. And they do, far faster than he does in the aftermath of Zoë’s cancer. “There’s an ache to not being able to help other people,” Cooper continues. “I was very aware that as she got better, I got worse.”

“Worse” mostly implies Cooper’s fits of anger during this years-long process—shouting matches with neighbors or strangers in parks; anger whose origin he did not fully understand. Did he have a right to this anger? The question becomes persistent, unanswerable. The climax of rage manifests in Cooper punching off a car’s side mirror after it almost hits him on his bicycle. “I don’t recognize myself,” he writes of the incident. “Who is this person?”

But in the face of confounding anger, something else arises: humor. “I don’t know if there is anything funny about death…” Cooper writes, “…but I do know it is hard to be scared by something you are laughing at. In fact, I believe it’s impossible.” Despite the weight of its subject matter, Cooper’s sharp wit infuses a wondrous and unexpected lightness into the book. “People are always thinking inappropriate things,” he says. “Even in my kids books I like to blow apart how things should be, and be a little inappropriate.”

Nearly a decade since her diagnosis, Zoë’s a healthy high-school student, but Cooper is still ruminating on anger and laughter, and whether words like “journey” or “process” can embody what they’ve gone through. “I don’t even know if I can say this made me a better person. It may have even made me a worse person in some ways. We all are different in how we get through the troubles in our lives. But my hope is that people will read this book and figure things out for themselves.” He pauses for a moment and laughs. “Or maybe they’ll read it and say, ‘Hey, at least I’m not punching a car.’ ”