On the Front Lines of an Epidemic 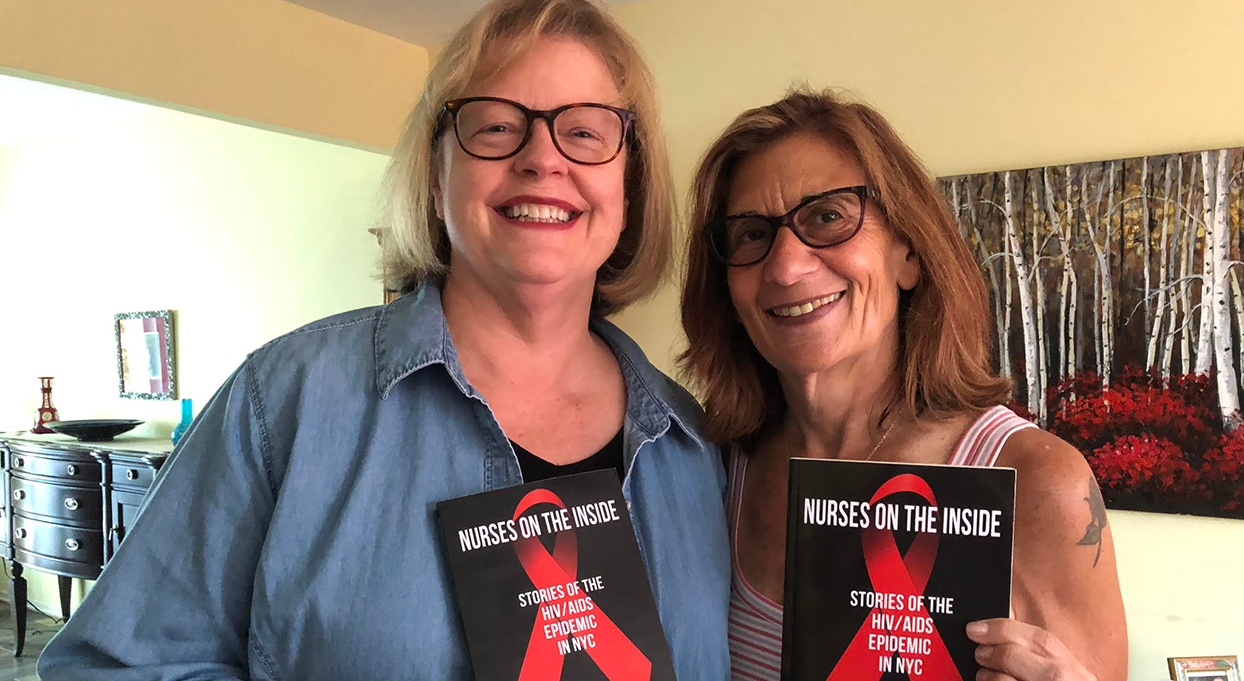 In the 1970s, Valery Hughes and Ellen Matzer were young nurses in New York City just beginning to see strange cases labeled as “the gay cancer.” From then through the 1980s and ’90s, the two women watched patients succumb to the illness as it snowballed into the full-blown AIDS crisis. Hughes and Matzer have reconstructed these years in heartbreaking and impressive detail for their debut book, Nurses on the Inside.Through revisiting the countless patients they treated, Hughes and Matzer offer a unique, informed perspective on both the individuals affected by AIDS and the biased institutions that failed the communities most affected.

What originally drew you to nursing?

Valery Hughes: I wanted to do something that would be useful, transferrable (so maybe I could travel), and interesting. I had some doubt about my competence, and I kept surprising myself when I did well each semester.

Ellen Matzer: My father always said to me, “Be a nurse. You will always have something to fall back on.” And Pace University was down the block from my father’s office, so I worked for him and went to Pace, never intending to be a nurse. After my first clinical experience in the hospital, I knew I was supposed to be a nurse.

What made you decide to turn your story into a book?

EM: I had never intended to write a book about my experience. I never thought it was a significant thing to do....I just sat down at my laptop and wrote down some memories. I was surprised at how much detail I remembered from patients I had taken care of. Names, dates, families, staff, events. I wrote everything I could remember. After about 20 pages or so, I realized I had something to share, but something was missing. So, I called up Valery (we hadn’t spoken in a few years) and said, “We are writing a book.” She said, “OK. What are we writing?”

How did you reconstruct your memories?

VH: Many of these things were traumatic and indelible, never to be forgotten. I remember the approximate dates of every new drug approval and every new scientific finding by heart. We both had cards and letters from patients and families.

EM: I have a great recollection about those years, the patients and families and the course of their illnesses. It’s funny, I have taken care of thousands of patients since those years in the ICU but remember none of them the way I remember those years. As Valery pointed out, many memories are embedded in me, and I don’t think I will ever forget.

What do you want today’s readers to take away from your experience with the crisis?

VH: Although being gay is much more accepted now than then, there are many who consider us less than human. You can say the same about people of color (who are disproportionately affected by HIV) and people who inject illicit drugs.

This crisis could happen again if we don’t address some of these social issues. It doesn’t have to be HIV; it could be something else. Infectious diseases don’t care about who they infect, but it is up to humans to be better than they were then. We need to care for all our people, address issues of stigma and prejudice head-on, and improve access to care for people who feel disenfranchised.

EM: The 1980s and 1990s were a crucial time in human health. They were traumatic and horrific. We had a job to do, and we did it with the most compassion and empathy we had. What I would like people to take away is that these patients in the book were real people, with aspirations, families that loved them (or didn’t in some cases), jobs, careers. Their lives were cut short, and there was nothing we could do about it at the time except walk through the stages of their illness with them.