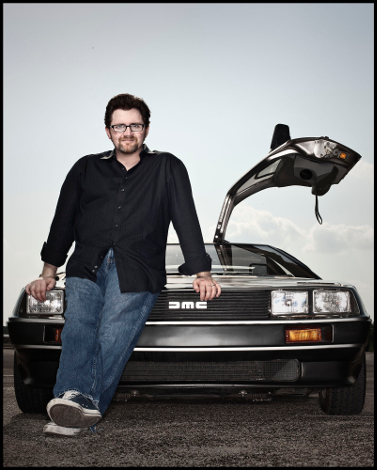 For a guy operating under some dangerously high expectations, Ernie Cline is surprisingly cool and collected when I reach him at home in Austin, Texas, although his inner fanboy is too animated to stay quiet for long.

To recap his origin story, Cline came to prominence as the screenwriter of the 2009 indie film Fanboys. Then in 2010, he sold his first novel, Ready Player One (hereafter known as RPO), which inspired a fierce bidding war for both the publishing and cinematic rights. The novel is a marvelous cyberpunk adventure novel about an adventurous kid from the future who chases a billionaire’s secret Easter egg through a virtual reality called the OASIS. Fast-forward to summer of 2015 and Ready Player One is a runaway bestseller, Steven Spielberg has been tapped to direct its film adaptation for Warner Bros., and Cline is about to release his hotly anticipated new novel, Armada. No pressure or anything.

If anything, Armada is an even more ambitious tale than RPO. Once again taking its cues from the 1980s, the novel stars high schooler Zack Lightman, who is convinced that his world is far bigger and stranger than simply going to school and the Portland videogame store where he works. Eventually, Zack discovers what his late father did: the Earth faces an imminent attack from aliens. In fact, the videogames that Zack and his friends play are really controlling a secret army of drones that remains the planet’s last line of defense. It also turns out that much of Earth’s pop culture for the past half-century, from Star Trek to Galaxy Quest, has been intentionally prepping Earthlings to help fight these space invaders.

“It depends on how deep your knowledge of the ‘80s and geek culture goes,” Cline explains. “If you’re a literary person, you’re going to say that it’s like Ender’s Game. If your thing is the movies, it comes from that genre in the ‘80s when kids could do anything. They can find the treasure map and save their town, or their dad gets shot down in some far-off country and they can steal an F-16 while Lou Gossett Jr. and Queen and Twisted Sister help them get their dad back. When people read Armada they’ll eventually realize, ‘Hey, Ernie isn’t ripping off The Last Starfighter. He’s ripping off Iron Eagle.’ It’s all around this idea of an absent father and the kid coming to rescue his father and even replace him in some way. It’s one of the big themes of Star Wars and Joseph Campbell’s mythology and Armada, too.”

Cline famously built an elaborate Easter egg into Ready Player One and is set to unleash similar hijinks with Armada—clever readers will find that many of the games and organizations referenced in the book already have their own “official” web sites. Like RPO, Armada also relies heavily on Cline’s vast knowledge of pop culture and the author has largely stopped telegraphing his references.

“What I tried to do is the same thing that you do when you’re talking to your friends,” Cline explains. “If you drop a line and your friend gets it, it conveys a whole world of meaning between the two of you. In RPO, Wade Watts is studying pop culture like an archeologist, so he feels the need to explain everything. With Armada, I felt like I had more license so I felt more justified in dropping those pop culture references.”

Without spoiling any plot points, I notice that in both Ready Player One and Armada, Cline’s heroes ultimately turn away from the games that mean so much to them.

“All the success that I’ve had hasn’t come from playing videogames,” Cline admits. “It’s great to play games and enjoy them but it’s better to take all that energy that I get from games and movies and books and mash them all up creatively. We’re evolved as humans to live in the real world and for the human animal, we only find real true happiness in the real world.”

Fans will also be pleased to hear that Spielberg’s adaptation of Ready Player One is moving along nicely. Cline wrote the first draft of the screenplay himself, which has since been turned over to screenwriting veteran Zak Penn, who has worked on plenty of big-budget blockbusters like Marvel’s The Avengers.

“I still can’t believe it,” Cline says of the impending movie. “Zak called and told me it was probably good I wasn’t at the meeting because I probably would have passed out. Steven Spielberg came in with a copy of the book with like 53 sticky notes on it, all of which were changes to the screenplay to make it even more like the book. My head would have exploded all over the room and they would have been picking bits of my skull off of Steven Spielberg.”

This news, of course, only puts more pressure on Cline to produce the inevitable Ready Player Two, but it turns out he’s okay with it.

“I hadn’t really thought about it because I wanted Ready Player One to have a satisfying ending,” he says. “But during the course of writing the book and the screenplay and then touring with it, it gave me time to think about what the sequels might be and to broadly sketch out the stories for Ready Player Two and Ready Player Three. It occurs to me now that I’ll probably have to wait to write them until next year when I’m standing on the set of Steven Spielberg’s Ready Player One.”

As if he didn’t have enough going on, Cline got another shot in the arm earlier this summer when the geek subscription service Loot Crate dropped a copy of RPO on its estimated 100,000 subscribers.

“That was incredible,” Cline admits. “It was like mail-bombing a copy of my book to every geek-minded person in the country and then two weeks later it’s announced that Steven Spielberg is directing the movie of this book that’s already in everybody’s living room. I don’t think any writer has ever gotten a setup to increase their readership the way I did. I still feel very grateful.”

Clayton Moore is a freelance writer, journalist, book critic, and prolific interviewer of other writers. His work appears in numerous newspapers, magazines, websites and other media. He is based near San Francisco, California.