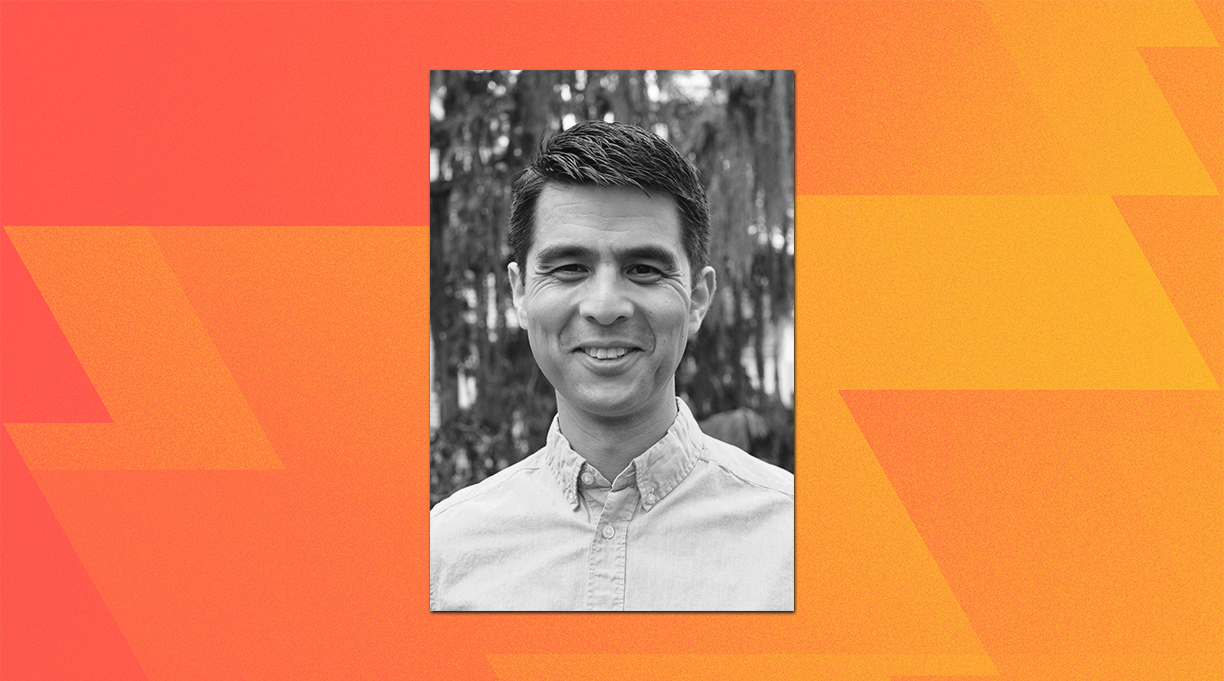 Photo of Jason Chin by Deirdre Gill, background by by Alejandro Ortiz on Unsplash

Caldecott winner Jason Chin is ready for his close-up—a close-up on the tiniest things imaginable, from a Calliope hummingbird to quarks and gluons. Kirkus calls his newest picture book, The Universe in You: A Microscopic Journey (Neal Porter/Holiday House, Oct. 18), a “fantastic voyage from an accomplished author/illustrator.” He answered our questions via email.

In Grand Canyon (2017), you wrote about an incredibly vast space. How did you approach this book, which looks at the most minuscule things?

I tried to imagine myself at each scale and to show what the world would look like if one were, say, the size of a hair or inside a cell. At first it wasn’t so hard, but it became more and more challenging the smaller I went. Matter behaves very differently at the scale of molecules and below, and it is impossible to accurately envision the world at the scale of quantum particles. And yet they are there at the foundation of all the matter in the universe. Figuring out how best to depict them was a fascinating challenge.

Your illustrations are, as always, striking. Do you have a favorite page or spread?

I like the way that the image of the interior of the cell came out. I think that it packs in a lot of information but also manages to be an attractive image. I hope it makes kids feel like the inside of their own cells is a place they’d want to explore.

I am also fond of the three spreads that show particles combining to make atoms, then molecules, and on up the chain to make our bodies and our world. These three images actually connect to each other, so if you were to cut them out of the book (I’m not suggesting you do!) and line them up, they would form a single image.

Were you a big reader as a kid? Are there any formative books you remember from your youth or any adults who influenced you as a reader or an artist?

I read a fair amount as a kid, but I was more interested in drawing, and there were a lot of artists that were important to me. David Macaulay’s books fascinated me. They revealed the inner structures and the hidden stories of buildings and machines. I loved them, especially Castle(1977) and The Way Things Work (1988). Ed Young’s books really meant a lot to me, because they gave me a way to connect to my Chinese heritage. I was and still am captivated by his color and design sense. Most important, however was Trina Schart Hyman.

I grew up in Trina’s town, and she visited our elementary school every year. What an impression she made! Her visits showed me that books and art were important. Everyone admired her, and she hung her artwork in our town library. I got to see the original paintings for Canterbury Tales (1988), [adapted by Barbara Cohen], Hershel and the Hanukkah Goblins (1989), [written by Eric Kimmel], The Fortune-Tellers (1992), [written by Lloyd Alexander], and many more. I treasured her books and emulated her art.

Then, when I was in high school, I met her, and she became my mentor. She never gave me art lessons. What she gave me was attention. She listened to me and talked to me about my life and my art. She believed in me, and that gave me the confidence to pursue a career in the arts. It was the greatest gift, and I would not be here without her help.