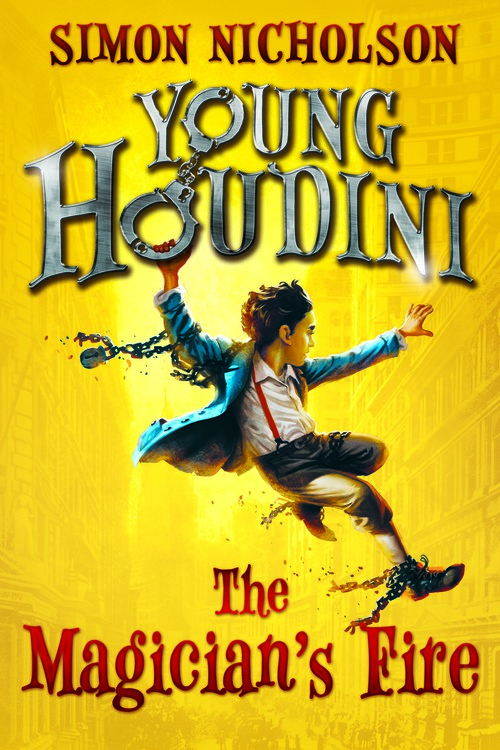 Kids’ historical fiction is full of cameos from historical figures, some figuring more prominently than others. Frederick Douglass never appears on stage in Christopher Paul Curtis’ Elijah of Buxton, but vomiting on the great abolitionist marks Elijah forever. On the other end of the spectrum, Thomas Jefferson and Sally Hemings’ children take center stage in Kimberly Brubaker Bradley’s heartbreaking Jefferson’s Sons. These books and countless others imagine events and dialogue that never happened or were not recorded, but they ground their imaginative portrayals in research that grants authenticity. But two recent books that feature real, historical figures as protagonists have me foaming at the mouth and hoping desperately that they do not portend a trend (though each starts a series, heaven help us).

Simon Nicholson’s The Magician’s Fire imagines Harry Houdini’s youth—very loosely. This fictional Harry was sent alone from Hungary by his impoverished father to make his way on the streets of New York. Anyone who has read Sid Fleischman’s Escape! or any of the many other biographies of the famed magician will know that Ehrich Weiss immigrated to the United States at the age of 4 with his family, with whom he lived for years, first

in Wisconsin and then later in New York City. His father was a rabbi; the only hint Nicholson gives to his character’s faith is a reference to “his father reciting prayers as the family sat by the fire.”

I understand the allure of a mystery/adventure for middle graders about a kid magician and set against a vaudeville backdrop, but why not, having decided to depart from the historical record so thoroughly, simply make the protagonist honestly fictional and apprentice him to an older Houdini? Readers’ experiences with the book would be nearly identical, and history wouldn’t fall victim to story.

If The Magician’s Fire irked me, The Case of the Missing Moonstone sent me around the bend. It features two 19th-century girls, Mary Godwin and Ada Byron, in a sluggishly madcap mystery. “The fact,” wrote Kirkus, “that in real life Mary…was 18 years older than Ada…doesn't seem to bother [author] Stratford one whit.” Artificially reducing the age difference, he puts the two together when Mary is sent to Ada’s house for tutoring—by an incognito Percy Bysshe Shelley, presumably foreshadowing Mary’s marriage to the poet in a later volume. Oh, and young Charles Dickens routinely hitches a ride in Mary’s carriage through some means that is never satisfactorily explained.

The sheer pointlessness of this setup astonishes me. The intended audience of 8- to 12-year-olds will have no clue about the real stories behind the characters they are encountering. This saves them being skeeved out by any foreknowledge of the romance between Godwin and Shelley, but it also leaves them completely in the dark about the wink-wink-nudge-nudge hints to Shelley’s real identity, a lame running joke. If Stratford’s trying to plant seeds of recognition that will sprout into understanding when readers are older, he is going about it very oddly.

Stratford informs readers in a preface that his characters really existed. He confesses to distorting time to accommodate his story, but he nevertheless cr

eates an expectation that there is some truth to it. Readers are likely to love such details as the hot air balloon that Ada keeps tethered to her bedroom window—a detail that has no evident basis in fact. (It is notably absent from the concluding, record-setting notes, which explain that, for instance, Shelley was dead at the time that the story takes place.)

As with The Magician’s Fire, it makes me wonder why Stratford didn’t just make the story wholly fictional and feature his two historic notables in supporting roles, as aunts or mentors. It’s a time-honored device, successfully utilized by Kate Hannigan in her upcoming The Detective’s Assistant (reviewed in this issue), which sends fictional 11-year-old Nell off on an adventure with her aunt Kate Warne, a real-life Pinkerton detective. A several-page author’s note provides further background about Warne.

On his Kickstarter page, Stratford describes his book as “a pro-math, pro-science, pro-history and pro-literature adventure novel.” Too bad neither it nor The Magician’s Fire is remotely pro-truth.—V.S.