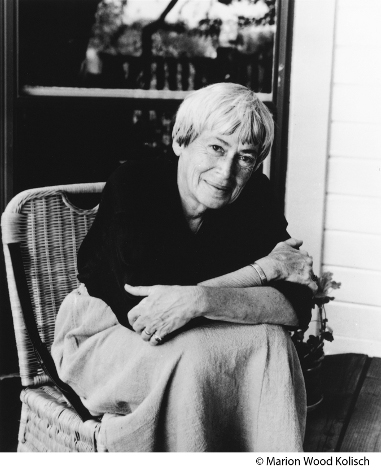 In memoriam, Ursula K. LeGuin, 1929-2018: “I don’t think science fiction is a very good name for it, but it’s the name that we’ve got. It is different from other kinds of writing, I suppose, so it deserves a name of its own. But where I can get prickly and combative is if I’m just called a sci-fi writer. I’m not. I’m a novelist and poet. Don’t shove me into your damn pigeonhole, where I don’t fit, because I’m all over. My tentacles are coming out of the pigeonhole in all directions.”—In conversation with the Paris Review in 2013

“When I found Ursula, it’s like this door opened up, you know? It’s like, wow, women can write this, and the science in science fiction can be anthropology, archaeology, psychology—all the social sciences. It doesn’t have to be about robots and laser guns. That just meant everything to me as a writer.”—Le Guin’s close friend and colleague Molly Gloss, on Oregon Public Broadcasting’s Think Out Loud

“All art-making is about failure. We never get it right. But poems are not poems if they make people feel dead. I want people to feel alive—even if it is alive with grief. I want people to feel their blood moving by the time I’m done.” A pause. “You can do anything in a poem, right?”—Poet Danez Smith, author of Don’t Call Us Dead, in the Guardian

“I think maybe other liberal progressives who lived through that election in Iowa might understand my need to write an 800-page novel to try to work through my emotions about it.”—Novelist Thisbe Nissen, author of Our Lady of the Prairie, in the Cedar Rapids Gazette, referencing the 2004 George W. Bush–John Kerry presidential contest

“For me, the message was clear: film cuts and trims with savage brevity, where a shrug or an intercepted glance or a nervous pause between two words can lay bare the heart in ways written prose is far more nuanced and needs more time and space on the page. But the thing is, I couldn’t write silence. I couldn’t measure pauses and breaths and the most elusive yet expressive body language.”—Author André Aciman, on visiting the set of Call Me by Your Name, the (subsequently Oscar-nominated) film adaptation of his 2007 novel, in Vanity Fair

Megan Labrise is a staff writer. The photo of Thisbe Nissen, above right, is by TKTK.