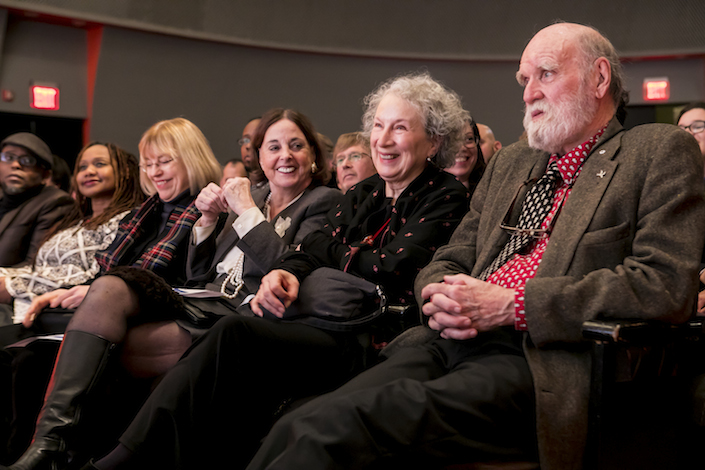 Margaret Atwood at the NBCC awards in March; photo courtesy of Marisol Diaz.

“When I did this research I was surprised by, wherever I looked, there were more drugs to be found. Drugs of all colors, shapes, and sizes...except marijuana. Nazis did not smoke weed. Other than that, they were really going for it.”

—Norman Ohler, author of Blitzed: Drugs in the Third Reich,in conversation with Dan Piepenbring of the Paris Review at NeueHouse Madison Square

“If you mean a novel in which women are human beings—with all the variety of character and behavior that implies—and are also interesting and important, and what happens to them is crucial to the theme, structure and plot of the book, then yes.”

—Margaret Atwood answers the question, “Is ‘The Handmaid’s Tale’ a ‘feminist’ novel?”, in the New York Times. The famous dystopian fiction inspired a TV series set to premier April 26 on Hulu. In anticipation, Hulu deployed hordes of silent handmaids to SXSW.

“...Amy’s genius was in her generosity...which the world saw when her recent essay about her husband Jason when viral. From her wonderful memoir Textbook to her picture books...she found ways to be kind to readers, to give them surprises and joy. No one wrote like Amy. No one saw the world the way she did.”

—John Green, author of The Fault in Our Stars, memorializes beloved children’s book author and fellow Chicagoan Amy Krouse Rosenthal on Twitter. Rosenthal died on March 13 after battling ovarian cancer. Ten days prior, the New York Times published her “Modern Love” essay, “You May Want To Marry My Husband,” which became a viral (multimillion-reader) sensation.

“It’s kind of surprising, because we’ve been talking about the demise of the book, but people kind of love to be around books. And actually staying at a library—living at a library for a while—that has an appeal, and it goes across all ages.”

—Ann Martin, co-founder of the Rocky Mountain Land Library, a “residential library” in South Park, Colorado, that will one day incorporate dormitories with stacks and reading rooms, in the Denver Post