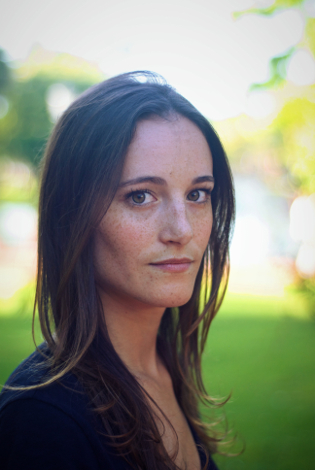 While writing Under the Harrow, Flynn Berry frightened even herself: her husband came home from work one evening to find Berry had bought four additional locks to bolt their apartment.

“He was a little concerned,” Berry now says. “There was a certain point where I almost wanted someone to attack me so I could fight back, because I was so angry. It affected my lens on the world.”

Under the Harrow opens with a grisly scene: Nora, a somewhat adrift young woman who lives in London, arrives at her sister Rachel’s home in the English countryside anticipating a home-cooked meal. Instead, she stumbles into a horrific crime scene with Rachel’s body at the center of it. Stunned and grief-stricken, Nora remains in her sister’s small town to aid in the police investigation.

“I think I’ve always been interested in fear, and the idea that you never know what’s going to happen,” says Berry, who attempted a few other novels before committing to this one, her debut, in part due to her fascination with crime. “After a crime, everything about a victim’s life is interesting and important and meaningful. Where she last ate her favorite food, who she’d just met or is sleeping with is suddenly tinged with darkness and significance.”

As part of her research, Berry took criminology courses and read materials from victim support groups.

“I was especially intrigued by the day-to-day routines after a crime, and the fact that people still have to work, pay the bills, and arrange child care, and they also often are returning to the house where something happened. It’s not like you suddenly get a free home. Nothing has stopped; you still have the struggles everyone has, but also dealing with something of such a great magnitude,” says Berry.

Nora isn’t yet settled in life when Rachel is murdered, and the trauma uproots her further. Grief fills the pages as she mourns her sister, reflects on their close, if complicated, relationship, and generally tries to cope. Nora forgets she can no longer speak to her sister: “I turn off the lights and crawl under the blanket. I know what’s happening is real, but I do keep expecting her to call,” Berry writes. During Rachel’s funeral, Nora bargains in her mind for Rachel’s life, considering the attendees she would trade to have her sister back.

Berry’s prose can be poetic and haunting in these reflections; when Nora’s friends leave after the service, she thinks: “I thought they would stay longer, and knowing that they didn’t is like watching it grow dark in the afternoon.” At one point, she thinks simply: “I don’t know how to survive the hours until I can sleep.”

The novel’s title is taken from C.S. Lewis’ A Grief Observed, in which Lewis reflects on mortality: “Come, what do we gain by evasions? We are under the harrow and can’t escape.” Berry also turned to Joan Didion’s The Year of Magical Thinking.

“I like reading grief memoirs like these because they seem more vibrant and more vivid and realistic than some memoirs of people who are still alive,” says Berry. “They show how wonderful life is. I want to capture that feeling of almost being on a razor’s edge where [Nora] is so desperate for life, and also staring that loss and grief in the face. It’s a state in which things are really heightened and so there’s a lot of sorrow, but then there’s also a lot of adoration for the texture of daily life.”

Under the Harrow features vivid descriptions of the English landscape and a focus on the objects in memories you can touch and taste, like the croissants the sisters eat on a weekend getaway. Berry also focuses on how grieving possesses “a sense of the rules being broken,” as she puts it—fitting, as Nora struggles to keep a grip on reality.

Rachel had been the victim of a seemingly random attack when she was in her teens, for which Nora blames herself for letting her walk home alone from a party. Nora quickly falls into habits the sisters had taken up after the first assault, combing news stories for similar attacks in search of the mysterious perpetrator. Nora’s search becomes an obsession, and as she learns more about her sister, she realizes her memories of Rachel may not be entirely trustworthy.

Berry began writing Under the Harrow while a student at the Michener Center for Writers at the University of Texas at Austin. There were a few crimes against women while she lived there, the author recalls, and a home invasion.

“It was really frightening and also made me very angry on behalf of the victims,” says Berry. “I’m always wanting to investigate crimes somehow and do something and this book was a revenge fantasy of sorts, or a way of running my own investigation. I felt so powerless to read about something and not do anything. It felt really satisfying to find retribution, even in fictional form.”