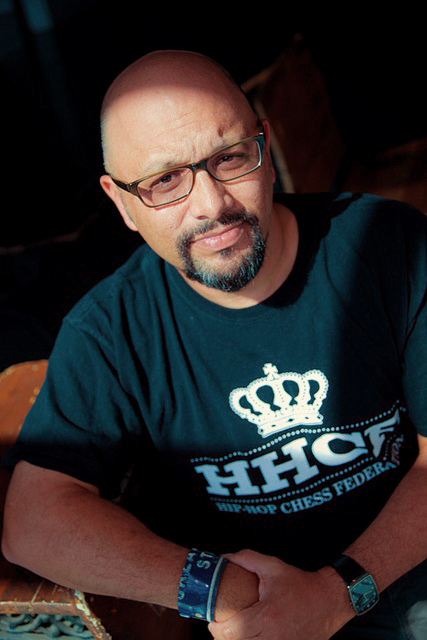 Storytellers, I believe, write not because they can, but because they must. G. Neri talks about his latest novel, Knockout Games, with such a humbling sense of authority, as if the characters themselves hold the keys to the novel while their creator deserves no praise for its brilliance.

A filmmaker-turned-novelist, Neri has already established a name for himself in the eyes of young readers. He was a 2011 Coretta Scott King honoree for his graphic novel, Yummy; Ghetto Cowboy, his middle-grade novel, received the 2012 Horace Mann Upstanders Children’s Book Award. He’s also a two-time American Library Association Notable Book Honoree. His books are full of chess fanatics, urban cowboys, Floridian smugglers and Chicagoan gangsters.

Neri’s latest is drenched in the horror of violence in which he is so well-versed, but it also touches on the beauty of young love. The first glimpse of Erica, the novel’s redheaded misfit, occurs as she’s leaving for St. Louis after her parents’ messy divorce. An oddball with bright red curls who always becomes a vulnerable target for bullies, Erica learns to live her life through the screen, making videos with her home camera. When Kalvin, the 18-year-old leader of the TKO Club, starts paying some interest in Erica and her filming talent, the 15-year-old girl suddenly gets dragged into the underworld of inner-city boxing clubs, where she is asked to film and eventually participate in the horrendous “games” of knocking out complete strangers with one single punch.

Despite its overarching concerns about human apathy in our computer-centric society, Knockout Games is first and foremost the story of an outsider. Even though Erica is Neri’s first female protagonist, she feels extremely relatable. Like any typical teenage girl, she worries more about her plump figure and her noticeable ginger curls than the fact that her family has broken apart because of her father’s infidelity. “The fact that she was a girl was just surface detail,” Neri says. “I just wanted to make her a real person with real emotions, and that part wasn’t hard.”

Neri knows what adolescents are like, whether it’s their ability to block out the consequences of their actions or their hunger for approval and acceptance in their communities. “A lot of these kids, they’re not from the strongest family structure, so the crew becomes their more immediate family,” Neri says. “To prove yourself to whoever that’s running this crew is a big thing, and to get acceptance from the other kids in the crew is very important, so that they belong to something.” He also doesn’t forget to show readers the innocent side of these children, who simply see all this as a game. “It wasn’t a gang thing; they weren’t robbing people—it was like a social dare,” Neri says. “And in fact, if you did that and were able to knock out this complete stranger, you kind of became the big man in school.”

It would be a mistake to assume this book should be read as yet another racial plaint. “Every single article talking about these situations going on is really just black vs. white,” Neri says. “To me, that’s far too easy. I don’t want people to be able to write it off, to say, ‘Well, that’s them.’ ”

The novel succeeds where media coverage of knockouts has failed: Knockout Games holds people accountable on all sides. His character Destiny, the queen bee of Truman High, grows uncomfortably from a bully to a best friend as the story progresses. Readers will also have a hard time dissing the so-called antagonist Kalvin, aka the Knockout King, who is misguided by an abusive and alcoholic father and grows up with a survival mentality of bully or be bullied (or in Knockout terms, “those who don’t play, get played.”)

The author finds it difficult to answer the question of how he identifies himself with his characters. “All my characters are kind of outsiders,” Neri says after a long pause. “They’re trying to figure out their place in the world, how they fit, and basically nobody is helping them, and they’ve got to figure it out on their own—by hitting your head to the wall one too many times until you find a hole in the wall that lets you through, that allows you to break through and find yourself.”

Neri’s books cater to a rather reluctant underground audience of young urban boys. Most of the sales go to public schools and libraries, where students who have possibly never finished a book are introduced to them, he says. “You can’t put Jane Austen or Shakespeare in front of a lot of these kids,” he points out. “The social and cultural gap is just too far—too distant for them to even begin to recognize that.” The author’s only hope is to plant a seed in young readers’ minds. “You have to talk about these things in an honest way to show the story without being preachy or moralistic about the whole thing,” Neri says. “By allowing them to experience it from beginning to end, the book tries to figure out past the headlines to understand why people get sucked into it, what’s actually happening, what’s the fun part that draws people in, but also what are the tragic implications and ramifications of doing something like this.”