A Doctor and Author Makes His Case for Intelligent Design 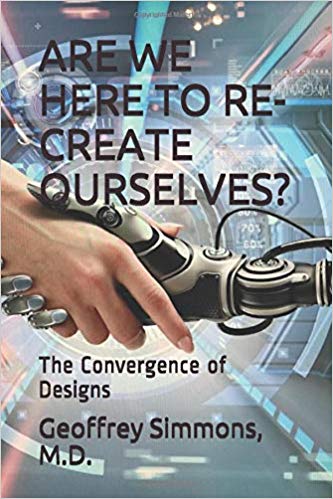 Before he found the theory of intelligent design, Dr. Geoffrey Simmons of Eugene, Oregon, felt that evolution explained everything. “I was not religious in the slightest,” Simmons says. “I mean, you couldn’t get me into a temple or a church on a holiday.” His wife, Sherry, however, was exactly the opposite and constantly engaged him in debates. “She challenged me on several issues, so I started investigating what I was arguing and learned that I knew very little compared to what was out there,” Simmons says. Those investigations would lead him to become a surprising advocate for intelligent design and to publish three books on the subject, including his latest, Are We Here To Re-Create Ourselves?: The Convergence of Designs.

Simmons has been retired from his medical practice for four years, but for 50 years he worked in internal medicine. “We were the detectives to diagnose patients,” Simmons says of his time carefully working through checklists to see which illnesses could be affecting people. As a medical student and a former student of biology and immunology, Simmons had never given evolution the same rigorous verification. “It was taught in school without anybody talking about the other side, that maybe evolution can’t explain everything.” Simmons says. “But for me, that changed with [a] book from England.”

That book was The Neck of the Giraffe (1982) by Francis Hitching. Hitching writes about the unique structure of a giraffe’s neck and certain aspects of whales, octopuses, and numerous other animals that, Hitching contends, cannot so easily be explained by the accepted theories of Charles Darwin, the fossil record, and the many scientists who rely on evolution. “It just jumped off the table,” Simmons says. “What about people and so many of the things that are so complicated with us? The more I looked into it, the more I thought about evolution, I began to think this just isn’t right.”

Although he’s quick to point out that there is plenty he agrees with in the works of Charles Darwin and evolutionary theory, Simmons’s questioning still led him to publish What Darwin Didn’t Know in 2004 and a follow-up, Billions of Missing Links: A Rational Look at the Mysteries Evolution Can’t Explain, in 2007. In Are We Here To Re-Create Ourselves? Simmons summarizes the broad arguments from these works that have come to define his worldview:

Physicians, I believe, are among the best observers of life processes. Most people view the human body from the stratosphere. From that height, all aspects of life can seem relatively simple and easy to explain. If one were to drop down into the microworld, however, one would readily see that nearly everything living is inexplicable….

All of the designs of life and how they came together to form a human being at the right time, in the right place, and in the right way is also beyond understanding. There’s more activity going on in a drop of blood than what’s happening inside the world’s largest skyscraper. Our lungs and heart are extremely compatible, as are all our organs. Our hands match up, as do our eyes, ears, and breasts. None of this is by luck or accident. Our brain functions better than millions of linked computers. Perhaps billions. Also, not by good luck or accident.

Although he came to these ideas somewhat later in life, writing is nothing new for Simmons. As a child growing up on military bases ranging from Germany to Florida, he loved reading SF. In the 1970s, he published multiple SF novels, including The Z-Papers in 1976. “At the time, I was thinking, ‘Michael Crichton, move over,’ ” Simmons jokes. And although he eventually moved into nonfiction, writing about disaster preparedness and penning a humorous take on medicine, Simmons never lost his fascination with speculative fiction and cutting-edge ideas, ideas that he has now incorporated into his discussions of intelligent design in Are We Here To Re-Create Ourselves?

In addition to his analysis of nature’s complexity, which Kirkus Reviews calls “enthralling,” Simmons’s ambitious new work takes a thought-provoking look at human inventions. He examines everything from simple, historical tools to our potential for deep-space travel in the near future. Throughout, he pays particular attention to humanity’s fascination with reproducing our own form, whether through dolls, robots, or clones. “There’s a whole pattern coming together in the form of robots or humanoids,” Simmons explains. “Is that just an accidental thing? Or has there been a pattern that’s purposeful to re-create ourselves? And then the question comes up: Why would that happen?”

The author never goes so far as to suppose exactly what could have designed human beings, nor does he speculate as to what could instill in them this need to re-create themselves with technology as he supposes. Be it God or aliens, Simmons is more concerned with the possibility that it was just something beyond the mechanics of evolution.

But that very ambiguity has drawn some strong reactions. Simmons has been invited to give talks in Spain and Israel, where he’s found that Orthodox Jews are extremely receptive to his ideas. (A Jewish dating site even regularly publishes some of his blog posts as material that would interest their members.) But on the other end of the spectrum, he has also found that “there’s a huge number of people who are really hateful when it comes to this material.”

Since he first started writing about intelligent design, Simmons’ readers have mostly fallen into two camps: those ready to believe and those who want to discredit his ideas. Famed evolutionary biologist Richard Dawkins, along with many other professors, has written against Simmons’ interpretations, although Simmons says he has yet to see clear, scientific rebuttals of the data and facts that he supplies. He finds this outright rejection speaks to a lack of dialogue in today’s world. “This country, like a lot of countries, is so polarized,” he says. “It degrades the conversation.”

Throughout his career in medicine, he spent his spare time researching fossil records or medical breakthroughs. As someone so dedicated to science, Simmons hopes to inspire conversations that question the widely accepted understanding of evolution. “The problem is that it doesn’t make sense…once we get down to the nitty gritty of the microscopic, submicroscopic, and chemical reactions,” Simmons says of Darwin’s theories from the late 1800s. “And I could talk all day and into tomorrow about that.”