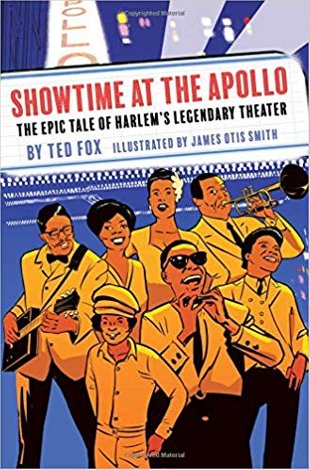 Since it was founded by Harry N. Abrams in 1949, Abrams Books has consistently produced some of the best art books in the industry (their first list, in 1950, consisted of three books: Renoir, Van Gogh, and El Greco); any fan of coffee-table books knows the name. Many readers, however, may be less familiar with the imprint Abrams ComicArts (launched in 2009), which, according to their website, specializes in “graphic novels and illustrated books about the creators and the history of comics art, animation, and cartoons.”

I admit that I wasn’t aware of ComicArts until a few years ago, but since then, I’ve had the opportunity to read (and assign for review) many of the illuminating books from their list, including Duncan Tonatiuh’s Undocumented, William Stout’s Legends of the Blues, Derf Backderf’s My Friend Dahmer, and the Audrey Niffenegger/Eddie Campbell collaboration, Bizarre Romance.

The latest is Showtime at the Apollo, written by Ted Fox and illustrated by James Otis Smith. According to our starred review, this graphic adaptation of the acclaimed 1983 book “adds a new dimension to a music book that was already hailed as a classic.” It’s a vibrant visual look at one of America’s most famous entertainment venues—a theater that has fascinated me since I discovered blues and soul as a young teenager—and it serves as a fitting introduction to readers who have heard the name but don’t know the stories beyond the stage. As our reviewer notes, “Fox and Smith effectively present the progression of entertainment styles from swing and tap dance through bebop, gospel and blues, rhythm & blues, soul, and rock. They provide an entertaining, lively narrative with profiles that match the spirit, drawings that seem as musical as the music described within the text.”