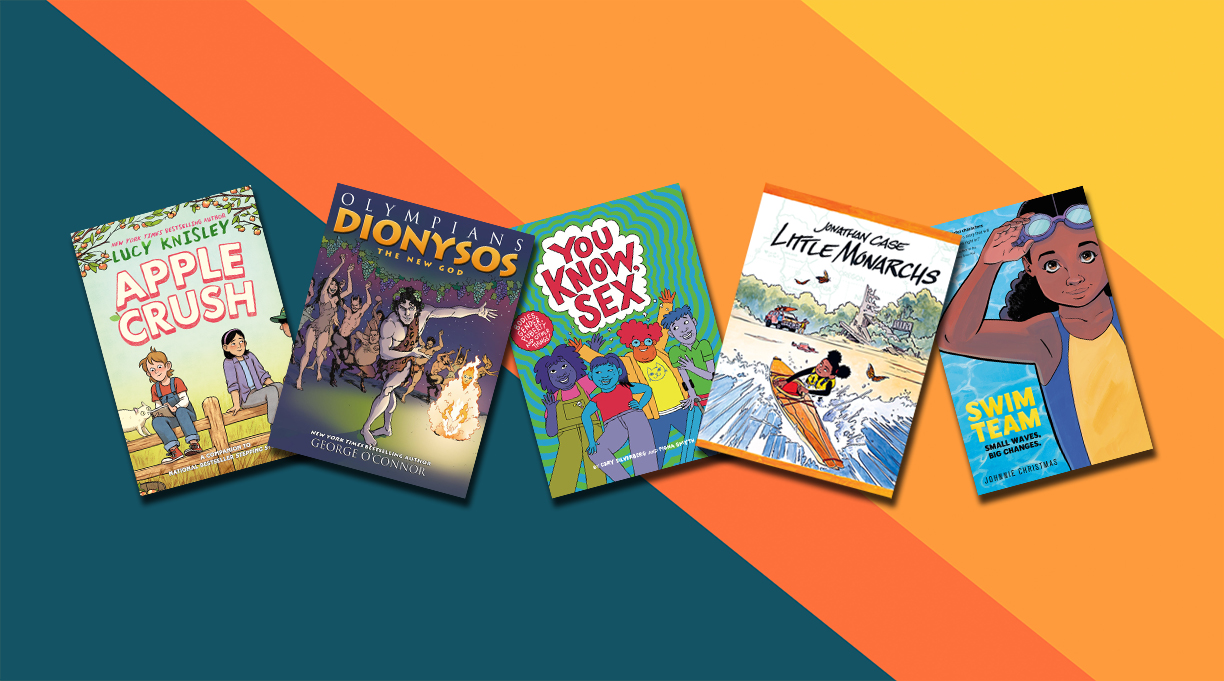 Background by Gradienta on Unsplash

After nearly 10 years at Library Journal and School Library Journal—the last five of which were spent assigning reviews of graphic novels for children and teens—I still marvel at the beauty and versatility of the format. As a new young readers’ editor at Kirkus Reviews, I hope these books continue to flourish; I’m especially excited to see stellar graphic nonfiction, books in which authors draw heavily from their own childhoods, and works that, à la Jerry Craft’s New Kid (2019), manage to simultaneously tackle typical kid concerns and complex social issues.

Set in a world where sun exposure causes illness and death, Little Monarchs by Jonathan Case (Margaret Ferguson/Holiday House, April 5) is nevertheless threaded with hope as readers see events through the eyes of Elvie, an imaginative, at times flighty, but courageous 10-year-old Black girl. Case’s richly illustrated, earth-toned panels are broken up by excerpts from Elvie’s notebook, filled with homework (assigned by her scientist guardian) and her charming, often heartbreaking musings. Readers will find Elvie a relatable stand-in, drawing parallels between her dystopian world and their own.

Johnnie Christmas’ Swim Team (HarperAlley, May 17) follows Bree, a Black girl from Brooklyn who moves to Florida and, with the help of a neighbor, transforms her fear of water into a passion for swimming. Christmas’ vibrant images portray both nail-biting races and quieter moments that see Bree forging powerful friendships, grappling with self-doubt, and learning that her fears are rooted in the nation’s long history of segregation. Though friendship is at the center of this tale, the protagonist’s relationship with her single father anchors her, too, and Bree’s frustration as he initially avoids her swim competitions leads to some especially poignant moments.

With Apple Crush (Random House Graphic, May 3), the follow-up to Stepping Stones (2020), Lucy Knisley once again mines her own childhood for inspiration. Jen, a young White girl, continues to cope with life in the country after her parents’ divorce. She may have adjusted to her newly blended family, but rough terrain lies ahead as she starts a new school, butts heads with a mean classmate, and feels out of place as almost everyone around her seems to be pairing off romantically. Knisley’s art, rendered in an autumnal palette, and her knack for zeroing in on tween angst result in a graphic novel that exudes warmth even as it explores growing pains.

Corey Silverberg and Fiona Smyth’s You Know, Sex: Bodies, Gender, Puberty, and Other Things (Triangle Square Books for Young Readers, April 12) makes accessible, and palatable, a topic that many kids and teens shy from. The author-illustrator team’s previous collaborations include Sex Is a Funny Word(2015), and their latest soars with the diversity of its characters, its vibrant colors, and its sensitive yet funny examination of gender, puberty, and, commendably, issues of consent. The book fairly explodes with content—our review notes that sharing it with a grown-up might be the best approach, and adults who pick it up will find it a welcome alternative to the dry sex-ed texts of yesteryear.

Like its predecessors, Dionysos (First Second, March 8), the final installment in George O’Connor’s Olympians series, boasts striking, angular art and is a testament to the author/illustrator’s meticulous research (his appended “G[r]eek Notes” are not to be missed). The series has always depicted the deities as simultaneously larger than life and all too human—and none more so than Dionysos, the result of a union between Zeus and a mortal woman. This origin story of the god of wine is appropriately raucous, with scenes of drunken revelry, but it’s also a coming-of-age tale, with surprisingly tender moments that see Zeus gazing down from Olympus with fatherly concern at Dionysos’ earthly misadventures.