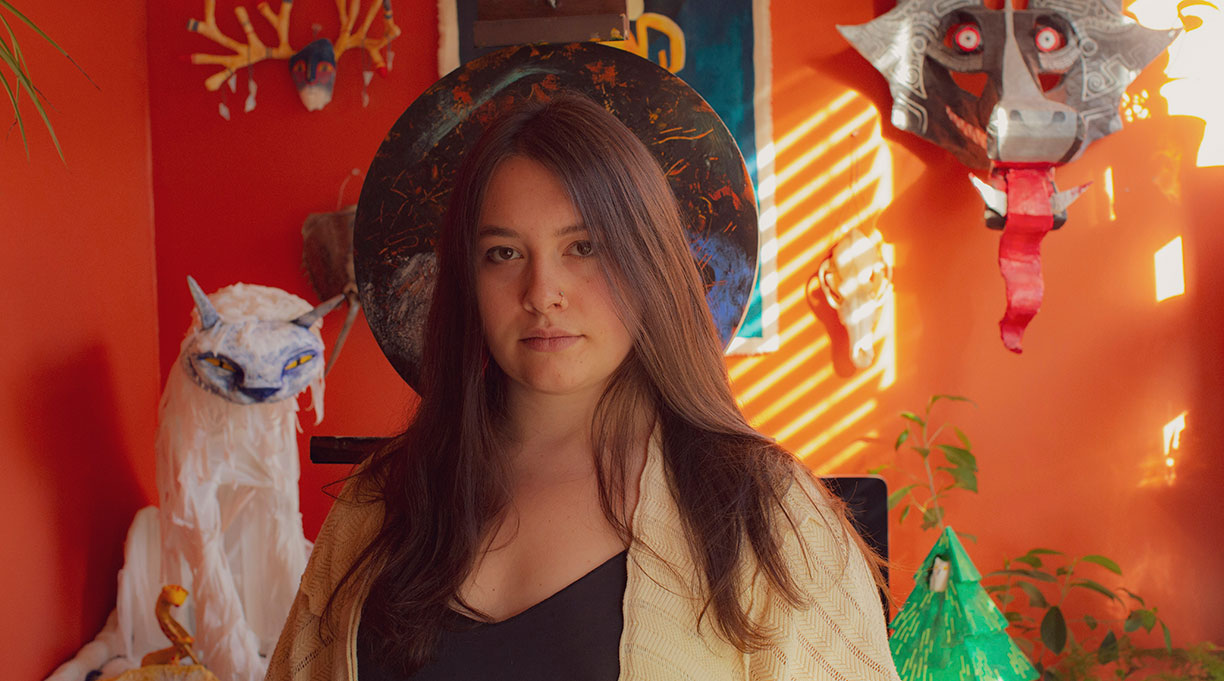 Hannah Salyer’s “uplifting, lively,” and majestically illustrated debut, Packs: Strength in Numbers (Houghton Mifflin Harcourt, Jan. 28), examines the form and function of nearly two dozen single-species animal groups, from a cloud of bats to a pod of dolphins. Highlighting often unexpected attributes of each community, the Pratt-educated author/illustrator celebrates their individuality while acknowledging their interdependence with one another and humankind.

Salyer spoke with Kirkus from her studio in Brooklyn, New York. The following interview has been lightly edited and condensed.

First of all, are there any vocabulary words more fun than nouns of assembly? You’ve got a “mob” of mongooses, a “flamboyance” of flamingos, an “implausibility” of wildebeest, etc.

I know, they’re wonderful. I’m blanking on the title but there’s a book completely dedicated to the group names of species. There are so many interesting and unexpected ones! I still have many questions about who came up with them, and why, but incorporating them was a fun aspect of the book.

So why does Packs get the title?

The story came about from a one-off piece I’d done my senior year of art school, a really tight composition of wolves running with each other, [their bodies] kind of weaving in and out….“Pack” is a common term when referring to wolves, and [my agent] Kirsten [Hall suggested it]. As I wrote the book and produced the rest of the art, it felt more and more fitting….We felt like we had to add the subtitle “Strength in Numbers” because “Packs” on its own can feel vague and can also be confused with “Pax,” P-A-X. So, “Packs: Strength in Numbers” felt like a good description of what you’d find when you opened the book—a very simple, clear way to introduce the concept of animals [of the same species] working together.

How did you conceive of the rest of the illustrations?

I watched a ton of wildlife footage because I wanted to convey the power and beauty of groups and felt like motion was a really big part of that. So I focused heavily on how these groups move together or how they exist together in a space. Granted, these pieces aren’t hyperrealistic—they’ve got some imagination, they’ve got some play on colors—but I wanted to present these tight, overflowing compositions that just make you feel like, Wow! This group is so vibrant and powerful and impactful,no matter what the group was doing or how it functions.

Yes, that was very intentional. The fish I chose is the goldsaddle goatfish. They’re these vicious hunters in the reef. You wouldn’t normally associate a group of fish with viciousness—it just sounds so wild—but I read a NatGeo article about them and one of the marine biologists described them as a “pack of lions.” So I thought, all right, these are going to be the creatures who do the hunting here. I wanted to flip the script, to subvert those typical associations. Creatures can always surprise you. Humans can surprise you, and other species can surprise you, too.

Why was it important to you to emphasize these species’ interdependence?

Many of these species are being threatened; they’re endangered. Unfortunately, that’s part of our reality right now, that’s part of the time that we’re in. There’s a term that I think is becoming more popular, the Anthropocene, which refers to this epoch of a deeply ingrained human effect on every part of the world and every type of species on the planet.

As a children’s book writer and illustrator, especially, I feel it’s my duty to acknowledge what’s going on in our environment. Kids are growing up and, in different ways, witnessing these effects, whether it’s via shows and news, whether it’s in their own backyard. It was really important to me to end Packs with a note acknowledging climate change and habitat loss.

We’re also living in a time where people like to draw lines in the sand and put up walls, and that’s not what this book is about at all.I wanted to make that clear. The more we find out about our Earth, the more it becomes evident how interdependent we are in every way.