From Home-Schooled to High School 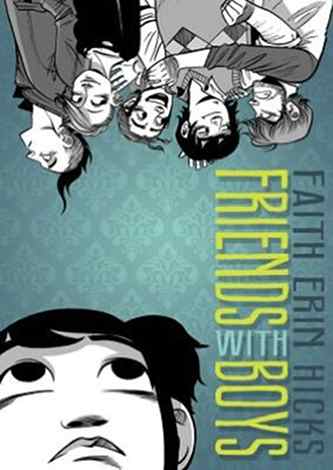 Canadian comics artist and writer Faith Erin Hicks’ graphic novel, Friends With Boys, features a young heroine who, like Hicks, has three brothers and must negotiate the tricky transition from being a home schooler to a high schooler. Here, Hicks explains a little about her longstanding interest in cartooning, her drafting process and why there’s a ghost in her story.

How and when did you start cartooning?

I’ve always liked drawing, though I did not show promise at an early age. I started making comics in 1999 when I was in college and began putting them online. They were awful! I calculated how many pages I’ve drawn since then—1,800. I just got interested and kept doing them. And then along came the publishers. Being a full-time creator was not my initial goal—I am as astonished as anyone else that I can do this for a living.

Where did the ghost in your story come from?

The ghost has a metaphorical nature in the story, which I don’t want to talk too much about, but I live in Halifax, Nova Scotia—and Halifax is very old, very layered, with a vast history. It’s also a maritime city with a reliance on the ocean.

I walk through the city, and there’s this posh downtown street next to a tiny cemetery. There are 1,200 grave markers in it but actually 12,000 people, all in this tiny plot of land. Halifax, it's a modern city living right next door to all this vast history. So the ghost came out of wanting to set this comic in this sort of small town with a layered history. It’s not exactly Halifax, but the setting is inspired by it, and the ghost is a part of that.

What’s it like being a graphic artist in Halifax?

Halifax has an amazing comic-book store and an amazing art store. I had a comic-book bible as a kid…Comics are sort of hard to get into without an entry point. They can be unfriendly to a female reader, but this store called “Strange Adventures” was awesome and reached out to me, got me the books I needed. It’s where I became a hardcore comic reader. The library system here is great, too.

Your work deals with contemporary subjects adolescents find interesting—bullying, peer relationships, what happens to home schoolers when they go to school, lunch-table dramas. Are you remembering this, or are you connected to a school?

A lot of it’s memory…I think high school experiences are universal. I attended in the late ’90s…but I feel like if I went back, the technology would be different, but there’d be the same crises, fights and [so on]. Everyone just goes through it. It’s always kind of a bummer.

Who did you have in mind as your audience when you were working on Friends with Boys?

This sounds lame, but I always tend to make comics I would personally enjoy reading. When I first did my Web comic in 1999 it was a Buffy the Vampire Slayer ripoff. I wanted a comic similar to that.

It’s been the same with every book. My first was about zombies. I like zombies. I really only started thinking about audience when I got published by First Second, since it’s more a concern for book publishers.

But I still write books that I would like. Though I am pleased when older male readers will come up to me and say, "I really enjoyed your book!" even though it’s about a 13-year-old girl. Knowing I am expanding horizons, showing them there are other works out there with female leads that they may also enjoy.

Which comes first for you, the words or the sketches, and how do you work back and forth between drawings and text?

When I write the initial script, I do thumbnails. I get giant notepads at the dollar store. For me, it’s important that the art and writing be developed at the same time. I don’t really know where my stories start, they just sort of come, though I tend to start with characters. That’s the very beginning of an idea. When I am sitting down to write my script, I do thumbnails to make sure the art and the writing are balanced.

You’re currently illustrating a work based on another writer’s story. How does this compare to doing it all yourself?

I enjoyed it. I’ll probably always prefer to write and draw my books, but this was fun—I was given the control to edit and change things around. I have opinions about timing. I like decompressing a scene in a comic so characters can have time to individually act and react to the emotion of that scene.

So you liked being given a rough draft you didn’t have to write?

Yes, I didn’t have to come up with the story, which can be the hardest thing. I was given this great story—I was like Steven Spielberg doing my adaption of [Michael Morpurgo's] War Horse!

Jessie Grearson is a freelance writer and teacher living in Falmouth, Maine. When she isn’t reading, writing or teaching, she enjoys dreaming up new recipes, some of which she enters into cooking competitions, and all of which she tries out on her husband and two daughters.