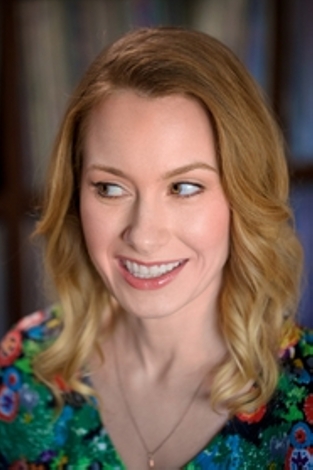 By middle school, author-illustrator Hope Larson had found her thing—art! writing!—just not her people.

“Oh god, I was a huge dork,” says Larson, an Eisner Award-winning comic artist, who writes the “Batgirl” series for DC Rebirth! “I was into fantasy novels, computer games—just nothing cool about me at all. Got a really bad haircut partway through middle school that didn’t help.

“It just felt like there was no one I could relate to in my pretty small private school,” she says. “There weren’t a ton of art kids around.”

In Larson’s latest middle-grade graphic novel, All Summer Long, 13-year-old Bina has the opposite problem: She’s got her person, but not her passion. All summers are spent with next-door neighbor Austin, her best friend from birth, with whom she compiles an annual Combined Summer Fun Index.

‘Celebs’ spotted: 5 (if the dog from Dog Camp counts)

But the summer before eighth grade, Austin gets a last-minute acceptance to intensive soccer camp, and Bina feels betrayed. He isn’t even responding to her texts in a timely manner.

“It’s like this huge betrayal,” Larson says. “How can you do this? And then not tell me till you’re basically leaving? That’s rough. But Bina’s a problem solver,” she adds. “She’ll figure stuff out—locked out of my house? Oh! My friend has a key; I’ll just break into their house and get it—and she’ll go for it. How do I start a band? I’m going to. She’s brave.”

After a few days of binge-watching a British television show and moping around the house, Bina mobilizes and begins to explore their Los Angeles neighborhood on her own. She borrows a CD Austin got from his cool music critic mom, falls in love with the band (Steep Streets), and starts tapping out her favorite songs on guitar.

Bina’s summer culminates in an opportunity to meet Steep Streets’s lead singer, Gaia, who gives her a free copy of their new album and an admonition.

“I’ll give it to you—on one condition,” Larson writes. “You gotta stick with the guitar.” And furthermore, “You gotta start a band!.... Starting a band is the only way you’ll get good enough to start a band.”

With a wide cast of supportive friends, family, and mentors, All Summer Long is “a coming-of-age story as tender and sweet as a summer evening breeze,” Kirkus writes in a starred review.

“What I wanted to do with this idea of mentorship,” Larson says, “was to give kids, especially girls, permission to do what they want to do. Because when you’re young and you have interest in doing anything creative, you’re getting a lot of messages that say don’t bother.

“Somtimes, you’re getting them from yourself,” she says, “—I’m not good enough to do this thing, or, I should choose something more practical—and it’s so important not to shut yourself down, and not let yourself be shut down, to get the message that it’s okay to do the thing you want to do. You don’t have to be perfect, you don’t have to be the best. Just wanting to do it is reason enough.”