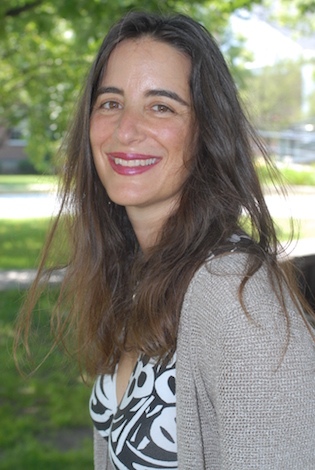 The twin protagonists of Jandy Nelson’s I’ll Give You the Sun are bursting with artistic potential and emotion and insight and desire that’s absolutely dazzling. Noah and Jude Sweetwine, at times so close they’re NoahandJude, are two of the brightest lights in YA fiction—which makes it especially curious that Nelson wrote their story in the dark.

What’s up with that?

Nelson laughs and says, “This sounds very strange, but it’s out, so I will go into it: I wrote my first book (The Sky Is Everywhere) like a normal writer at a desk in an office with a window, but with this book, I don’t know how it evolved over time, but I wrote pretty much the whole thing over three-and-a-half years in this completely pitch black room, curtains drawn, earplugs in, sound machine blasting and the only light in the room was the light from the computer screen, which became this portal into the story.

“I feel like it allowed me into the story and the characters in this really tremendous way, and I highly recommend it, even though it sounds so insane,” she says.

Let’s go with “quirky,” a trait shared by the Sweetwine twins of Lost Cove, California. The two take turns narrating I’ll Give You the Sun from different vantages—Noah at age 13, Jude at age 16—the story flowing back and forth through time.

At 13, Noah is introspective but harbors multitudes. He offers breathless commentary on everything, including his sister: “And because of her hair—I use up all my yellows drawing it. It’s hundreds of miles long and everyone in Northern California has to worry about getting tangled up in it, especially little kids and poodles and now asshat surfers.” He also explains himself: “I hate the water, prone as I am to drowning and drifting to Asia.” And he’s not shy on opinions about their mother: “She has the bananas look on her face that happens in museums, like she’s going to steal the art,” or on art itself, “I could tell the paintings were looking at me as hard as I was looking at them.”

Art professor Dianna Sweetwine wants them to apply to CSA, a prestigious high school for gifted young artists. It’s the opportunity Noah’s been waiting for: a chance to realize his tremendous potential in a nurturing space. But Jude, popular, beautiful, athletic and extroverted, is conflicted—and receiving a smaller share of their mother’s encouragement. It portends the wedge between NoahandJude.

“Every time Grandma S. read Jude’s and my palms, she’d tell us that we have enough jealousy in our lines to ruin our lives ten times over,” Noah narrates.

Three tumultuous years later, Jude reveals that extreme changes have taken place. “The worst thing that could ever happen to Noah has happened. He’s become normal. He has the proper amount of buttons,” Nelson writes. She’s changed, too, as evidenced in a rare (!) sibling exchange: “ ‘Don’t do social events. Don’t wear the dresses.’ ‘You used to.’ I don’t say, ‘And you used to make art and like boys and talk to horses and pull the moon through the window for my birthday present,’ ” Nelson writes.

A palpable darkness has descended over the Sweetwine family, and neither Noah nor Jude knows the full story. Jude’s fearsome new mentor and a troubled young man offer clues, but it’s up to the twins to find their way back to one another in order to unravel a series of mysteries.

There are trespasses between these two—some seemingly unforgivable—but Nelson doesn’t moralize. “ ‘Maybe we’re accumulating these new selves all the time.’ Hauling them in as we make choices, good and bad, as we screw up, step up, lose our minds, find our minds, fall apart, fall in love, as we grieve, grow, retreat from the world, dive into the world, as we make things, as we break things,” she writes.

“I don't feel like it's my job to send messages, but to be true to my characters and the story I'm writing and hope that teens relate to both,” Nelson says. “I think teens are very sophisticated readers and like most readers probably have an aversion to any kind of didactics or moralizing. That said, I am of course aware of the age of my audience but it really doesn't inhibit me as a writer from telling the story I want to tell. Actually, I think it inspires because I know what devoted sharp readers they are and that I can't get away with anything.”