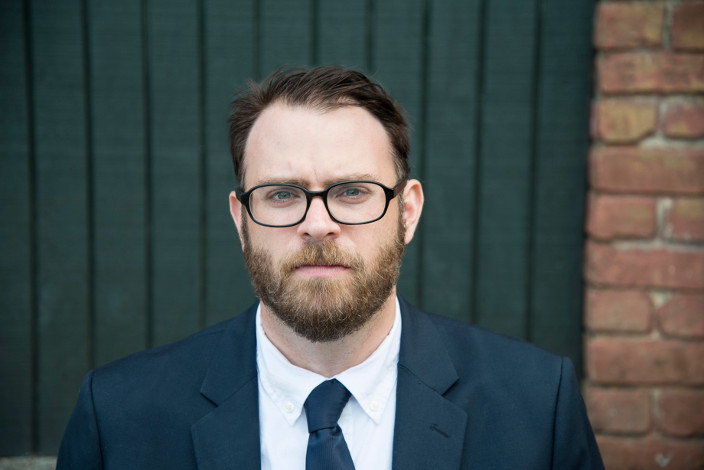 Every week the headlines unfurl like a bad dream: Russia, North Korea, Charlottesville, the border wall. For Americans on either side of the political spectrum, each news story is a wedge, another fissure that forces, or reinforces, one’s political loyalty. While many now are wondering just how the hell America arrived at this point, Jared Yates Sexton sought out the answers firsthand on the 2016 campaign trail. The People Are Going to Rise Like the Waters Upon Your Shores: A Story of American Rage is his account of the American anger, politics, and candidates who led us to this point.

Prior to 2015, politics was a self-proclaimed “hobby” for Sexton. But nationally covered killings in Ferguson, Missouri, and Charleston, South Carolina, stirred him into action. He began by reporting on church arsons in the South, then took to driving cross-country to cover presidential campaign events for the Atticus Review. What he discovered at these events, however, was not what he’d expected. “Hunter S. Thompson talked about it in a lot of his books. He said, ‘There’s no addiction and no drug like politics.’ You get this moment when you’re at these rallies where it feels like history is flowing around you, like you’re in a river,” Sexton says. “Then I ended up going to a couple of Trump events and it was different. It wasn’t like being there for history, it was watching something really ugly boil up.”

This boiling overflowed at a Trump rally in Greensboro, North Carolina. In June 2016, Sexton live-tweeted the event, capturing the vitriol being spouted by many of the rally’s attendees and exposing the burgeoning, extreme ideology of the Trump movement. The content of those tweets was so shocking that by the end of the night the posts had gone viral (his Twitter followers skyrocketed from around 1,000 to nearly 40,000 overnight). Suddenly, Sexton wasn’t just an active observer, but a voice thrust into the national spotlight. He was invited on television programs and began penning articles for the New York Times, Salon,and others. “It was really overwhelming,” he says, recounting not only the sudden support, but also the death threats, strangers skulking around his house, and internet sleuths unearthing his personal information. “It took a lot of adjustment and time to wrap my head around it. And to be honest with you, I’m still trying to figure it out and navigate it.”

Now, with more people listening than ever, Sexton is focused on documenting and deconstructing the Trump movement so that if and when these raging waters subside, a greater sense of understanding, and empathy, can rise up in its place. “I try very hard when I’m talking about politics to do it in a way where someone out there who disagrees with me can see the logic or the place where it’s coming from,” he explains. “I think the book has a focus on diagnosing not only political polarization, but also forwarding an idea of what the Trump movement is: what it is at its heart, the danger of it, and possible ways that it can be counteracted. I want to look at the people who make this movement, who are doing and saying some really grotesque things, and get to the more nuanced explanation to how we got here so possibly we can take a few steps back.”

While Sexton’s criticism homes in on Trump’s rise, his biting criticism in the book is not reserved solely for Republicans or the far right—Hillary

Clinton’s campaign strategy, the far left’s ugly turn when Bernie Sanders ended his presidential campaign, and the media’s portrayal of rural American voters over the years all draw Sexton’s ire. But in Sexton’s critiques throughout the book and in his continually mounting Twitter presence, there is a critical difference between the flawed far left and the flawed far right. “I think what’s happening with the Trump movement is that you have a group of people, whether they realize it or not, that have decided not to participate in shared society. They’ve decided to try to dominate society,” he explains. “When that happens, you can’t come to each other in good faith, because in one hand you have a group that’s trying to dominate and on the hand you have a group that’s trying to talk about things. I think that’s the main problem with our politics right now.”