A Creative Friendship Lives on in a Picture Book 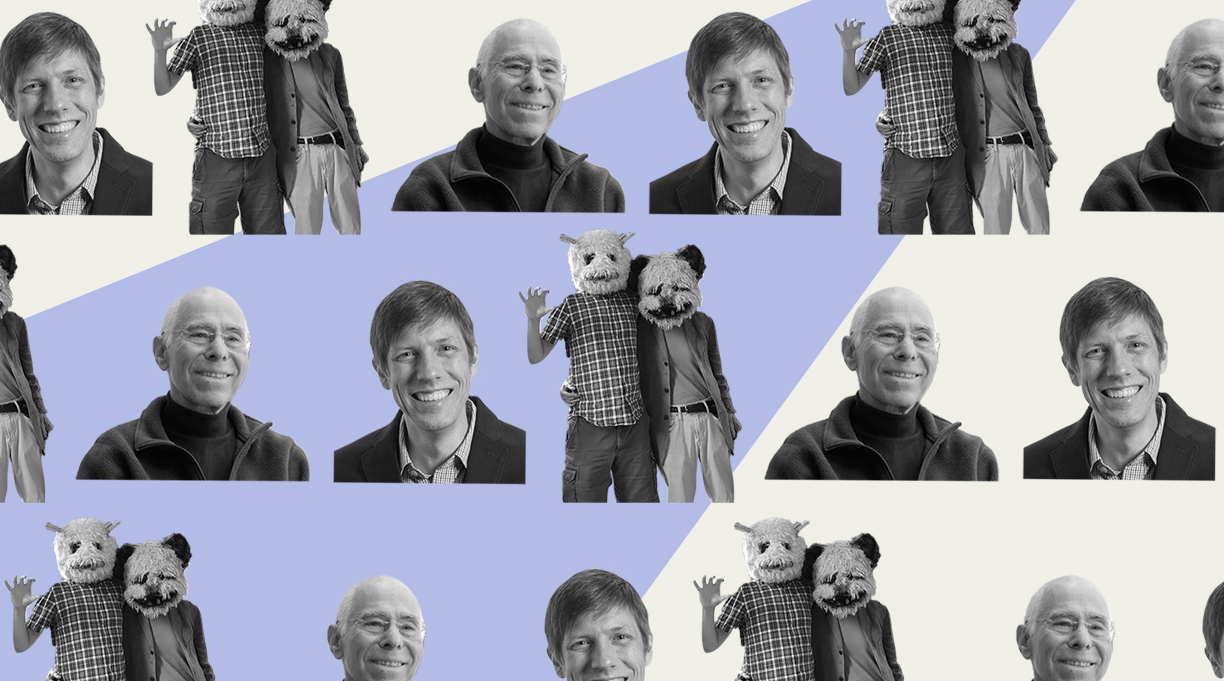 Massachusetts’ Pioneer Valley has become home to a vibrant community of children’s book creators, among them Caldecott Medalist Mordicai Gerstein and Jeff Mack. The two author/illustrators were friends, so when Gerstein was inspired to change up his style, he called on Mack for advice—and when he felt his health failing in the middle of what was to become Moose, Goose, and Mouse (Holiday House, Jan. 5), he asked Mack to help with the illustrations and ultimately finish them for him. Gerstein died on Sept. 24, 2019, at the age of 83, leaving behind a text that was a madcap homage to Edward Lear and illustrations in various stages of completion. Mack, 48, spoke with us via Zoom from his home in western Massachusetts; the interview has been edited for length and clarity.

How did you and Mordicai get to know each other?

I first met Mordicai in 2009 at the R. Michelson Galleries in Northampton. Then, maybe a few months after that, he got in touch with me and said, “You know, I’m looking for a writers group in the area, do you know anybody who’s interested?” And I said, “Well, I have a writers group.” We were all meeting once a month, having dinner and talking about our projects. Mordicai asked if he could come along and check [it] out. So he did, and it was a really good connection for everybody. Maybe five years through that, he and I were at some event at UMass, and we sat next to each other at the dinner table. We were the only two people who knew each other at the table. So we were chatting with some other people, but we mostly found we just liked talking to each other. After that, we started going to lunch and found that we had a lot of interests in common. Eventually, we started traveling up to [the Massachusetts Museum of Contemporary Art] together to see some concerts and just check out some of the exhibits, and we just wound up being really good friends for the last five years of his life.

And how did you become involved in Moose, Goose, and Mouse?

At one of those lunches he told me about how he loved Edward Lear, and he said, “I have this idea for this book about a moose, a goose, and a mouse that travel on this train, and they’re looking for a new home.” Then he called me not too long after and said, “I’m trying out some new art techniques, and I know you have some experience working digitally. I’m wondering if you would want to help me out with this.” So I went over to his studio, and we worked together making these collages where we would scan painted pieces of paper and see what kind of effects they would have. And we found something he really liked. And he said, “OK, I think I’ve got the technique down.” And he didn’t quite have it down, because like two days later, he called me back to ask, “Can you step me through the technique again?”

Eventually, he called me again and said he was ill with throat cancer. He said, “I’m just having too many bad days here. I’m wondering if you could help me finish this book.” So that’s what I did. I went to his studio, I took all of his drawings and sketches, and I brought them back to my studio, scanned them into my computer, assembled them as we had been doing, then brought them back to his house. At this point, he was in bed. I brought my laptop, and I sat next to him at the bedside. He’d say, “You know, like, I think that needs to be a little brighter,” and “Why don’t you move that character over there a little bit?” We tweaked all the images that way, got through about half of them. And then he was gone, and I finished the rest of the book.

Was that his first experience working digitally?

Yep. That was the first time.

Did he explain why he wanted to experiment with digital composition?

He just liked to try everything out and see what was going to happen. He was a really restless guy who was always experimenting.

This book is a pretty big departure for you, stylistically. How did you get yourself into Mordicai’s style so that you could create a seamless visual experience?

For my own work, I’m always trying out different styles, [and] when I got out of college, one of my first art jobs was [a commission] to make copies of [some] paintings. I learned a lot about mimicking another person’s style. When it came to Mordicai, I felt it was not too hard for me to mimic [his] line quality. Or if I had to redraw a page or make up something that wasn’t there to begin with, it wasn’t too hard.

Mordicai’s line is so spidery. I haven’t seen a single Jeff Mack that has that exact spidery quality to it.

It’s his authentic hand. It’s his DNA in that line. Some [of the pages] were finished, and some of them were sketches, and they were all different sizes. It was an interesting challenge to put them all together and make the whole thing look consistent, as though every page had been done the same way. But to some extent the level of completion didn’t matter, because it was always his hand in it. You know, it always still had his personality coming through the line. And it didn’t matter what he did—he was just so honest about it. He never tried to show off for anybody.

Are there entire spreads that are 100% Jeff Mack in Moose, Goose, and Mouse?

The cover is pretty close. There was a small scribbly sketch that he did that I redrew for the cover. But most everything has at least some of his beginning work in it. I wanted to help my friend out, you know, I did not want this to be about me at all. I wanted it to look exactly the way he had planned it. He was a good friend, you know?

You must get somewhat verklempt talking about this.

I do. I haven’t talked about it too much. It’s been over a year now. Early on, it was hard to talk about. But it gets easier to talk about because it winds up turning into a story. I was finishing up a lot of it right when things were locking down here, and it was terrifying. It gave me something to focus on at that time, which was really a mind saver.

Is there anything else you’d like to say about the book?

I can’t wait to see it. I haven’t seen the printed copy yet. I think kids will really like it. Mordicai was in his 80s, but he had a complete connection with how a 4- or 5-year-old thinks. He just got it intuitively, he didn’t have to think about it.