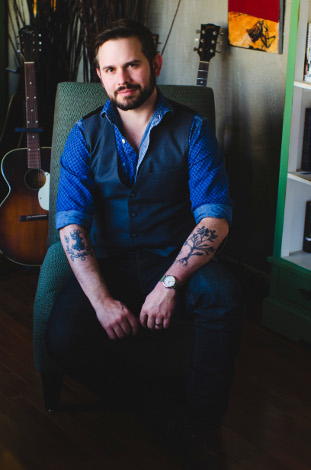 I’ve never been to Tennessee, but listening to Jeff Zentner describe it, I’m about ready to pack my bags and buy a plane ticket: lush wildness bursting with green things; kind people who love telling stories; the smell of barbecue on the air. “But underneath that all, there’s this kind of haunted past where the South is trying to atone for its sins of the past,” he says, “and it’s trying to move on from its darker days.”

This desire to escape your history runs through Zentner’s debut novel, The Serpent King. His three main characters—Dill, Lydia, and Travis—are in their senior year of high school and trying to figure out how to transition into the next stage of their lives. None of the three quite fit into their small Tennessee town, Forrestville: Dill struggles with the legacies of his imprisoned preacher father and his troubled grandfather; Lydia dreams of pursuing journalism in New York; and Travis just wants to escape into his beloved fantasy novels.

Zentner, on the other hand, is firmly rooted in the South: he’s lived in Tennessee for most of his life. He’s always been a reader and writer, as well, but he’s much newer to fiction. Throughout his 20s and early 30s, he found creative fulfillment not in prose but in music. Playing guitar and writing songs taught him a lot about his creative process and perspective. “I’ve got a viewpoint, I’ve got a way of viewing the world, that is going to come through in everything I write, in everything I make,” he says.

His creative focus changed after he started volunteering at a summer music camp. “It was the first time since high school that I had been around teenagers,” he says, “and I was really impressed with their energy and particularly the way they interacted with the art they loved, the way they clung to it and let it define them.” He knew he wanted to make art that would speak to a teenage audience and realized that, since he wasn’t going to be invited to join One Direction, writing a novel was the best way to do so.

Zentner has a very straightforward method of writing: “I just take everything that I’m really interested in and passionate about at any given time and mush it up into one single novel and hope it all kind of hangs together,” he says. The Serpent King combines his struggles with faith,

his interest in how high schoolers are using the Internet to make their marks on the world, and his curiosity about the “blue-collar fantasy nerds” he saw all over Tennessee, to name just a few of the disparate elements that he drew on for the book.

The seeming randomness of this approach belies the common threads that run through all of Zentner’s work. “I really love the beauty of the world, and that’s always going to come through,” he says. This attitude shines through the novel when the characters delight in watching trains or when Zentner describes a gathering storm.